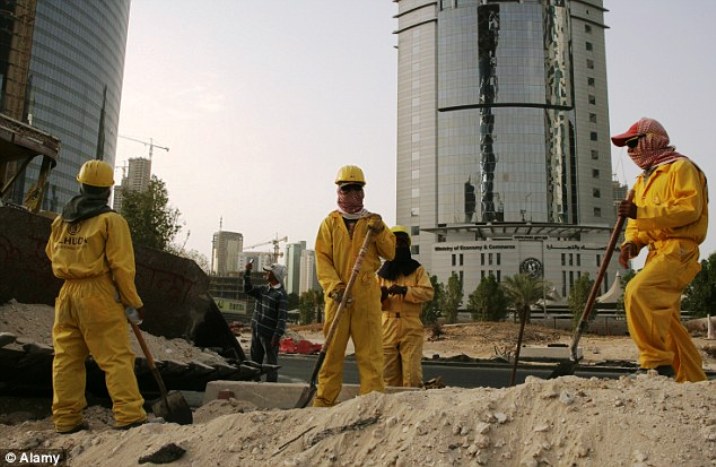 Qatar on Monday formally announced the end of its controversial “kafala” system, arguably the biggest ever labour reform undertaken by the host of the 2022 football World Cup.

In a long-expected announcement, Labour Minister Issa bin Saad al-Jafali al-Nuaimi said the “kafala” rules would be abolished from December 13.

He said a contract-based system to govern the gas-rich Gulf emirate’s 2.1 million foreign workers would take its place.

Under “kafala”, all foreign workers working in Qatar require a local sponsor, in the form of an individual or company, and need their permission to switch jobs or leave the country.

The system was compared to modern-day slavery and left vulnerable workers with little protection and open to abuse, critics said.

“The new law is the latest step towards improving and protecting the rights of every expatriate worker in Qatar,” Nuaimi said.

“It replaces the kafala system with a modernised, contract-based system that safeguards workers’ rights and increases job flexibility.”

Freedom of movement is guaranteed under the new rules, said Qatari officials, including giving workers the right to change jobs.

Any workers mistreated will automatically be allowed to change jobs, said officials.

The exit visa formally needed to leave the country under “kafala” will be abolished, although workers will still need their employers’ permission to go home.

An appeals committee has been established for expats who are denied permission to leave, and that committee will begin work on Tuesday.

Many migrant workers, especially those in the construction sector, complain they are enticed to Qatar on contracts which claim they will earn far more than they end up receiving.

The changes, known formally as Law No. 21 of 2015, were first announced by Emir Sheikh Tamim bin Hamad Al-Thani last year.

Ever since Qatar was chosen to host the 2022 World Cup, its labour laws have been internationally condemned and “kafala” has been at the heart of that criticism.

Nuaimi on Monday urged critics to give the new rules time to take effect.

“We welcome any comment or constructive criticism, and will continue to do so in the future,” he said.

“However, we urge the international community not to draw any definitive conclusions until there has been time to see the new law in action.”

But rights group Amnesty International, which earlier this year accused Qatar of “forced labour”, immediately said in a report that the reforms would not “scratch the surface”.

“This new law may get rid of the word ‘sponsorship’ but it leaves the same basic system intact,” warned Amnesty’s James Lynch.

“It is good that Qatar has accepted that its laws were fuelling abuse, but these inadequate changes will continue to leave workers at the mercy of exploitative bosses.”

It also warned football’s governing body FIFA and its sponsors not to claim that the reforms mean “the problem of migrant labour abuse has been solved” in time for 2022.

“If the reform stops here, workers across the country — building and working in the stadiums, hotels and transport network that every player and fan in Qatar will use — will be at serious risk of human rights abuse.”

A government statement rejected the Amnesty report, saying it remained “committed to the development of a labour system that is fair to both employers and employees alike” and the change would ensure workers’ rights are respected.

“We will continue to review and adapt our laws to ensure our approach to reform is fit for the purpose,” it said. – Agence France-Presse