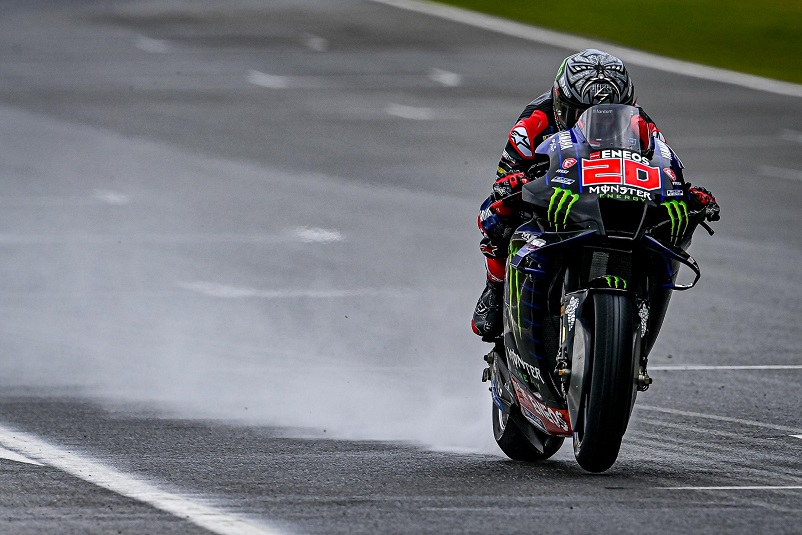 Monster Energy Yamaha’s Fabio Quartararo has so far lived up to his billing at the Red Bull Spanish Grand Prix after holding off the hard-charging Ducati trio of Enea Bastianini (Gresini Racing), Francesco Bagnaia (Ducati Lenovo Team) and Jorge Martin (Pramac Racing) to end the opening day of action fastest.

The Frenchman found a late flying lap of 1:37.071 to be two tenths clear of his nearest challenger as the entire field improved on their times set in FP1.

Looking at the opening day of action, it’s the Bologna factory who may well be Quartararo’s closest challengers to the Jerez throne after Bastianini, Bagnaia and Martin all impressed. The former World Championship leader jumped ahead of his factory counterpart with the chequered flag out to take second spot after Bagnaia had earlier lead the session. The number 63 appeared to be back to his brilliant best as he threw in a handful of fast laps, with his best placing him third overall and a quarter of a second adrift of his 2021 title rival. Martin was just under three tenths away in fourth, with Jack Miller (Ducati Lenovo Team) making sure there are four Desmosedicis in the top ten after stealing tenth.

Ahead of what is arguably the most important weekend of his MotoGP™ career, Takaaki Nakagami (LCR Honda Idemitsu) started well by ending up fifth overall. The Japanese rider was the top Honda, 0.009 seconds ahead of Repsol Honda’s Pol Espargaro in seventh. Sandwiched between the two RC213Vs, and having spared KTM’s blushes, is Red Bull KTM Factory Racing’s Brad Binder in sixth. The final spots inside the top ten went to Team Suzuki Ecstar’s Alex Rins, the only survivor in the top ten from Friday morning’s top three, and Aprilia Racing’s Maverick Viñales, the pair finishing eighth and ninth respectively.

Pedrosa to the rescue after Marquez crashes twice in 4 turns

In a quite bizarre half a minute, the eight-time World Champion crashed at Turn 6 and Turn 9 before then grabbing a taxi from Dani Pedrosa

MARC MARQUEZ HAS A SESSION TO FORGET

Two close calls, two crashes and a lift back to the garage from a former teammate. Repsol Honda’s Marc Marquez had a session to remember for all the wrong reasons. First up, he had a hairy moment with teammate Pol Espargaro (Repsol Honda) and rookie Remy Gardner (Tech3 KTM Factory Racing), with the Australian less than pleased with the Spaniard’s antics. He would later get a wagging finger off of Aleix Espargaro (Aprilia Team) as well, all after crashing out twice.

His first off was a gentle one at Turn 6, before quickly picking up the bike and rejoining. Whilst cruising back to the pitlane, the eight-time World Champion was cruising off of the racing line at Turn 9 and touched a damp patch that remained from Thursday’s rain. Down went the Spaniard again but, fortunately for him, former teammate and now KTM test rider Dani Pedrosa was on hand for a taxi back.

BIG NAMES UP AGAINST IT

After all of the above, Marquez is languishing down in 19th spot. But he isn’t the only front-runner in trouble. Podium finisher last time out, Pramac Racing’s Johann Zarco, sits 11th. Despite being fastest in FP1 on Friday morning, Team Suzuki Ecstar’s Joan Mir slipped back to 12th. The man third in the title standings, Aprilia Racing’s Aleix Espargaro, is a further spot back in 13th. And after showing impressive pace in FP1 to sit third on the timesheets, LCR Castrol Honda’s Alex Marquez suffered a frustrating afternoon to fall down to 16th.