Home 2020 Quartararo vs Mir: Le Mans revs up for a battle royale 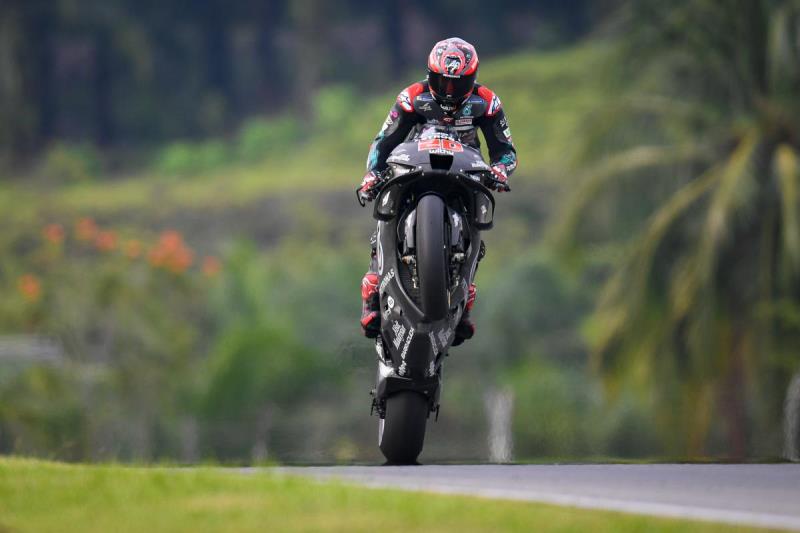 A home hero, a man on a mission and a finely-poised 2020 title fight. There’s no place like home, but will that prove enough?

Heading into the Catalan GP, four points covered four riders. As we saddle up and head for Sarthe, however, four points is now half the gap from first to second – and that gap is enjoyed by home hero Fabio Quartararo (Petronas Yamaha SRT).

The Frenchman won in Barcelona to put himself back on top, staking his claim on the 2020 FIM MotoGP™ World Championship crown once again. By the final laps though, it was close, thanks to yet another late pace stunner from Suzuki.

And this time, there were two: Joan Mir (Team Suzuki Ecstar) and Alex Rins took a close second and third as they churned through Quartararo’s advantage, and the scene is now set for a showdown of the sophomores at Le Mans. Quartararo 108, Mir 100.

The latest instalment of MotoGP™ madness is coming and this time, France plays host

For ‘El Diablo’, there’s home pressure but some home cheer too, and he’ll have to balance that at the same time as the neverending see-saw of the Championship. Le Mans is a venue tamed to perfection on many an occasion by Yamaha, however, so the omens are good for Quartararo to come out swinging and win on home turf. Can he become the first Frenchman to take to the top step at Le Mans in the premier class and extend his advantage? Mir will be the first trying to stand in his way.

Incredibly, despite being second overall and having taken more consistent podiums than anyone this year, Mir is still yet to win. And the Mayorcan says he won’t be fully locked on to the title as his main target until he’s managed to do so. That’s a pretty clear statement of intent from the Suzuki rider, and if he can show the same form as we’ve now come to expect, he is to be expected in the fight at the front. With a little less work to do from a higher grid position, or even just a better shuffle of the dice at Turn 1, Mir could easily already have been a winner… and the home hero vs the hungry bridesmaid could make one awesome showdown come Sunday. Rins will be hoping to keep his form rolling too – it was over a year since his Silverstone win and the last time he’d been on the podium – and his impressive ride through the field from outside the top ten gave Suzuki their first double podium since 2007. The Hamamatsu factory have also won a MotoGP™ race at Le Mans, although in the wet… in that same 2007.

Quartararo’s fellow Yamahas will be gunning to pin back the Suzuki charge, however. Maverick Viñales (Monster Energy Yamaha MotoGP) had a muted Catalan GP after getting shuffled back at Turn 1 and he lost ground, but he’s a man with serious form at Le Mans, having won in 2017 with an imperious performance. He’s only 18 points off the top too. His teammate Valentino Rossi, meanwhile, will also be out for revenge after bad luck in Barcelona. The number 46 crashed out of second and will want to make amends, but like last time out, both he and Viñales will likely also have Franco Morbidelli (Petronas Yamaha SRT) for company in the Iwata marque shootout. Bad news for each rider with that stiff competition, but great news for Yamaha.

For former points leader Andrea Dovizioso (Ducati Team), however, the venue could be a little less welcoming: Ducati have never won at Le Mans. Now 24 points off the top after getting wiped out early on in Barcelona, the Italian faces a mountain to climb to get back in the hunt. He’ll want to start sooner rather than later, and rake in some solid points as a minimum. Pramac Racing’s Jack Miller and Francesco Bagnaia will want the same and to take the honour of top Borgo Panigale machine, however, as will Danilo Petrucci (Ducati Team). And there’s a Frenchman on a Ducati to contend with too: Johann Zarco (Esponsorama Racing). The number 5 has known home glory at Le Mans, and he’ll throw everything at it to taste more.

And what of KTM? The Austrian factory had a tougher time of it in Barcelona, although some bad luck also played its hand in that. How will they fare in France? Their impressive step forward in 2020 is illustrated by asking ‘what happened’ after only one race without a KTM on the podium. Pol Espargaro (Red Bull KTM Factory Racing) will be aiming to put that right, and rookie teammate Brad Binder will want to iron out some of his troubles since that stunner of a win at Brno. Styrian GP winner Miguel Oliveira (Red Bull KTM Tech 3) can’t be counted out in the charge either, and what can his rookie teammate Iker Lecuona do?

Speaking of rookies, Alex Marquez (Repsol Honda Team) is another who will want more in France. The number 73 seriously impressed in Misano before a more difficult race on home turf, where the more experienced Takaaki Nakagami (LCR Honda Idemitsu) pulled well clear to finish the race as top Honda. Nakagami could be one to watch in France, with the Japanese rider now the only man to have scored in every race so far in 2020. And they haven’t been a run of 15ths – the number 30 is well up there most weekends, only just out the podium fight. Teammate Cal Crutchlow (LCR Honda Castrol) impressed on his return from injury as he gritted his teeth to a top ten too – will the Brit manage to make his way further forward in France? And can Aprilia Racing Team Gresini move up the board too? Another test for the Noale factory after Barcelona gives them more data, and they’ll want some more solid points as a minimum as they continue their push forward.

There’s no better way to head into your home race than off the back of a win, but there’s more at stake for Quartararo in the French GP than simply home glory. Another win now would extend that advantage into a little breathing space, and be a serious warning shot for his rivals – all whilst hearing the Marseillaise ring out across Le Mans. But Mir is a man on a mission; Viñales, Rossi, Rins, Morbidelli and more are waiting in the wings… and there are still six races to go in a rollercoaster 2020. Who will reign Le Mans? Place your bets – but be prepared for the odds to change again.

MotoGP™ go racing in France at the slightly earlier time of 13:00 (GMT +2). So save the date – there’s another classic coming your way! – www.motogp.com