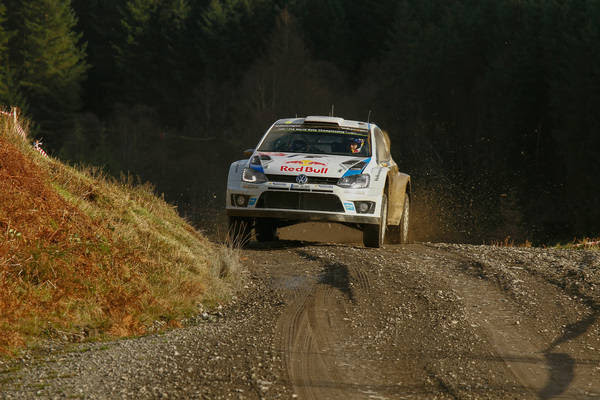 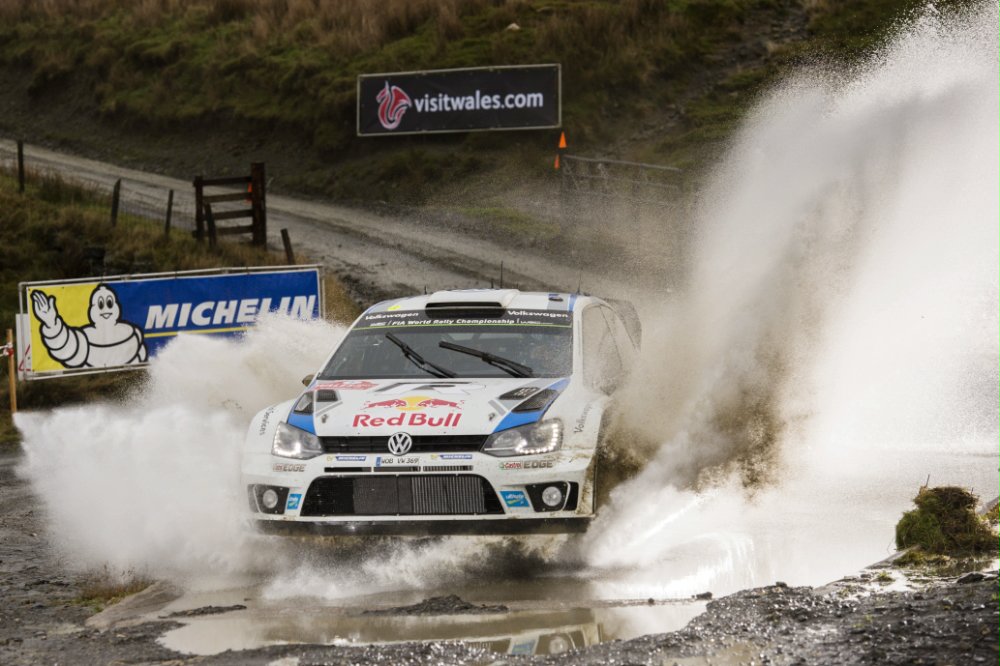 Set-back for Latvala/Anttila – from tenth to second, then back to eighth

Impressive comeback from Mikkelsen/Fløene – five stage wins out of nine

The dream duel has been replaced by the ultimate one-man show – Volkswagen duo Sébastien Ogier/Julien Ingrassia (F/F) hold a commanding lead after day two of three at the Rally Great Britain. The back-to-back world champions* have paced themselves intelligently at the final round of the FIA World Rally Championship (WRC) since finding themselves roughly a minute clear of the rest of the field after their team-mates suffered an early set-back on the second morning. Determined to eat into Ogier/Ingrassia’s lead, Jari-Matti Latvala/Miikka Anttila (FIN/FIN) skidded off the road and consequently lost about three minutes. They dropped from second to tenth overall, but had fought back to eighth by the end of the day. With 46.12 kilometres of the Welsh classic to come on Sunday, Ogier/Ingrassia lead Mikko Hirvonen (M-Sport-Ford) and Kris Meeke (Citroën) by 58.1 seconds.

The day’s fastest pair was undoubtedly Andreas Mikkelsen/Ola Fløene (N/N) in the third Polo R WRC. Returning to action under Rally2 regulations following Friday’s off, the Norwegian pair bounced back with five stage wins from a possible nine and were never outside the top two. As such, Volkswagen has now won 14 of the 17 special stages so far in Wales.

Quotes after day two of the Rally Great Britain

Sébastien Ogier, Volkswagen Polo R WRC #1
“It was like a totally new rally for Julien and me after the first stage of the day. Having seen that my team-mate Jari-Matti had come off the road, we stopped pushing so hard. Our goal is now to control our lead of just under a minute until we get to the finish and to set a record of twelve wins in one season with Volkswagen. Sure, we have a comfortable lead, but you can never be certain at the rally in Wales. The conditions are too difficult to take anything for granted. I feel sorry for the fans that the exciting duel with Jari-Matti did not last right through to Sunday.”

Jari-Matti Latvala, Volkswagen Polo R WRC #2
“Today obviously did not go to plan. I wanted to continue pushing hard this morning, in order to stay in the hunt for victory. Unfortunately, however, I missed a braking point on the very first stage and skidded off the road. I’d like to say a big thank you to the fans who helped us out of the ditch, otherwise it would have been over for us. It was difficult to push the car to the limit without the rear wing, and I did not find it easy to get into a good rhythm. However, we found our form again at the end of the day. On Sunday I will try to remain positive and clock a few fastest times on the really slippery stages.”

Andreas Mikkelsen, Volkswagen Polo R WRC #9
“I enjoyed day two of the Rally Great Britain more than the first, that is for sure. We won five stages today and did not finish outside the top two all day. The Polo was fantastic and the special stages were hugely enjoyable. It is a shame we slipped up yesterday – who knows what we could have achieved here otherwise. Unfortunately we had a problem with the intercom today. Considering we struggled to hear each other all afternoon, it actually all worked out rather well in the end. Our priority for tomorrow is once again to memorise the special stages for next year, and to have some fun.”

Jost Capito, Volkswagen Motorsport Director
“Saturday was a typical day at the Rally Great Britain. The extremely difficult conditions in the Welsh forests always produce great drama. Jari-Matti Latvala discovered that at first hand today. He wanted to increase the pressure on Sébastien Ogier, but skidded off the road in doing so. That left Sébastien in a situation, where he was able to simply defend his lead. He did that intelligently. Andreas Mikkelsen hit back superbly today, clocking nothing but outstanding stage times. All in all it has been an eventful day for the World Rally Championship, and for us as a team. That only goes to show that we will have to be on the ball right down to the finish if we want to be celebrating another victory tomorrow. I believe the team and drivers are alert enough to pull it off.”

… Superfan I: Luciano Finzi. The Italian won the “Incredible Rally Hunt”, the reward for which was the road-going version of the Polo R WRC. Over the course of the WRC season, eight participants from six countries had qualified for the final in Wales, where they were confronted with five ‘stages’ on the Friday and Saturday of the rally. These included geocaching, filling in a questionnaire alongside test and development driver Dieter Depping – at full rally speed – and a stunt competition with parallel parking world record holder Ronny Wechselberger. The final challenge was a spectacular obstacle course, at the end of which the fastest competitor – a certain Luciano Finzi – plunged into a mud bath to fish out the keys to the Polo R WRC.

… Superfan II: Henry. A photo with Andreas Mikkelsen, Sébastien Ogier and Jari-Matti Latvala was one of the highlights of the weekend for the nine-year-old, who is a dedicated fan of Volkswagen’s rally team. Henry took time off school in order to follow all four days of the rally in Wales. This was permitted on one condition: Henry must write a comprehensive essay about his experiences, to be handed in on Monday. He will have plenty to write about, including helping out as a mechanic with one of the national rally teams and visiting “Becs” Williams, the voice of the WRC, in her radio studio.