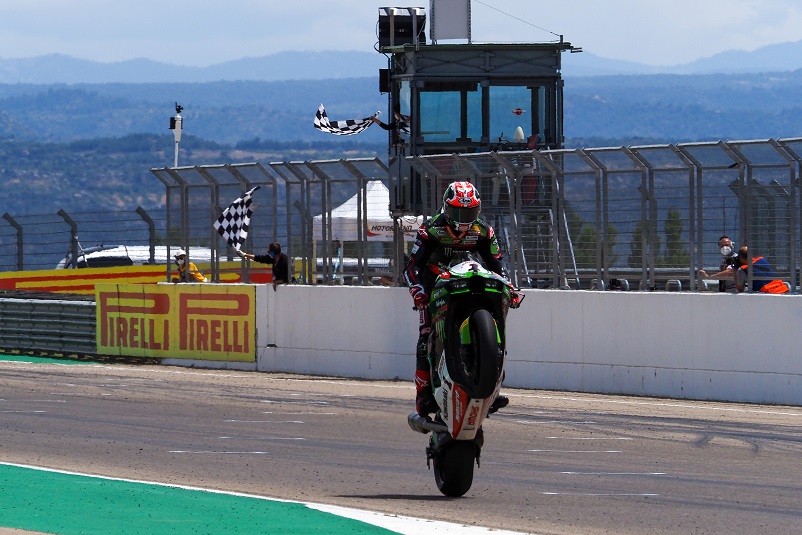 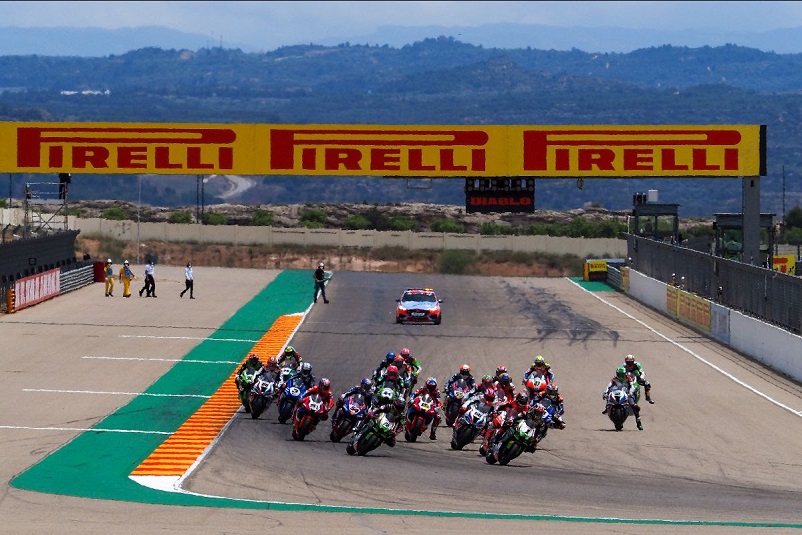 Rea led a Kawasaki Racing Team WorldSBK 1-2 with Alex Lowes coming home in second place, four seconds away from Rea after challenging him in the early stages of the races. Lowes was under pressure from Toprak Razgatlioglu (Pata Yamaha with BRIXX WorldSBK) and finished in second place by just 0.043s ahead of the Turkish rider, who had battled through from tenth on the grid.

Rea was able to retain the lead of the race but was immediately put under pressure by teammate Lowes – looking to be the one who would deny Rea his 100th WorldSBK victory for the time being.

Scott Redding (Aruba.It Racing – Ducati) ran in third in the early stages of the race but was unable to keep up with the pace of the Kawasakis out in front, ensuring Garrett Gerloff (GRT Yamaha WorldSBK Team), Chaz Davies (Team GoEleven) and Razgatlioglu, who started tenth, were able to stay in podium contention but not challenge the Kawasakis in the early stages.

Razgatlioglu was the first rider to get by Redding on the inside of the left-hander of Turn 1, allowing the Turkish rider to start chasing down the Kawasakis out in front. Davies followed a lap later with a sensational overtake on Redding at Turn 2 with Davies looking to add to his win total at Aragon.

After getting past Redding, the Turkish star had his eyes set on Lowes who was his next target for second place, with Razgatlioglu able to get past Lowes before he started to move his target towards Rea. Razgatlioglu was unable to break away from Lowes and Davies but started lapping faster than Rea with around five laps to go, although not fast enough to put pressure on Rea in the closing stages of the race.

On Lap 16, Lowes tried to re-pass Razgatlioglu at Turn 4 and briefly got ahead but the Turkish rider was able to brake later on the brakes, a theme that ran throughout the last few laps of the race, keeping Davies in contention for second place. At the final corner, Lowes again briefly got ahead but Razgatlioglu was able to just about defend his position although the British rider finaly got by at Turn 1 on Lap 17.

The battle was not over as the race came to a conclusion as the pair duelled it out, with Lowes winning out on a drag race to the line for a KRT 1-2; both Lowes and Razgatlioglu claiming their 25th WorldSBK podium.

The battle allowed Redding and Alvaro Bautista (Team HRC) to close in on the battle for second, although Redding dropped Bautista as he approached the battle creating a four-way battle for second place; although Bautista crashed out of the race on the final lap at Turn 2, forcing the Spanish rider to retire. After losing out earlier in the race, Redding was able to get by former teammate Davies for fourth place as the final lap started, with Redding finishing fourth and Davies fifth.

Tom Sykes (BMW Motorrad WorldSBK Team) was unable to convert third on the grid to a podium finish but, after a difficult start, was able to manage his SCX tyre to come home in sixth place in the M 1000 RR’s first race. Michael Ruben Rinaldi (Aruba.It Racing – Ducati) was another who managed the SCX tyre with seventh place, around two seconds clear of Leon Haslam (Team HRC).

Rookie Tito Rabat (Barni Racing Team) was the first to retire from the race with a technical issue in the early stages of the race after securing a top-12 starting grid spot, while Leandro Mercado (MIE Racing Honda Team) brought his Honda machine into the pitlane on Lap 8 with the Argentinean rider not finishing the race. Rookie Samuele Cavalieri (TPR Team Pedercini Racing) was another retirement from the race around the halfway stage, bringing his Kawasaki machine into the garage. Eugene Laverty (RC Squadra Corse) brought his BMW machine back to the garage on lap 14 of 18 with an issue after running close to the top ten for the majority of the race.

“Incredible, what a race! I just felt from the start, I really wanted it, so I put my head down and it just came. The rhythm at the beginning was good and I was going away, not too stressed, but then at the end I was surprised how much everyone was dropping because I felt really slow but the gap was increasing. What a way to be in the race, it doesn’t happen like that normally. To reach 100 victories… that’s a career milestone. I’m so, so happy with that and to do it here in WorldSBK is amazing. I guess it’s Lewis Hamilton next, so good luck Lewis!”

“Before the race, I didn’t know what to expect. We’ve obviously tested here a lot but the conditions have changed so you don’t really know and it’s always that excitement of the first race. I felt quite good at the start, I got a good start, I stayed with Jonathan. After a few laps, I encountered some big problems on the front end, I had two or three big slides. I just thought to myself it’s the first race of the year, I saw I had a bit of a gap. I knew they were going to catch me but I decided to just be smooth in the middle. I was thinking, when someone passes me, to try and stay with them and use them to fight for the end of the race. When it was Toprak, I thought great, because you know what he’s like on the brakes. We had a good battle, some parts he was faster, some parts I was faster. I could see that, maybe in the last three laps, he was spinning a lot, so I didn’t want to pass him before the last corner. He was turning better, he was going to switch me, so I decided to wait on the outside, be a little bit patient and get a bit of a run onto the straight. A fantastic battle. When you’ve not had any race action for a few months, to have a battle like that is great and really gives you the taste of it for the start of the season.”

“I’m really happy with this first race because normally I’m not really strong at this track, but today also my team did a good job because we see I’m on the podium in the first race. This is important for me because now, tomorrow, I come in very strong because I see some problems in the race and today I’m happy.”