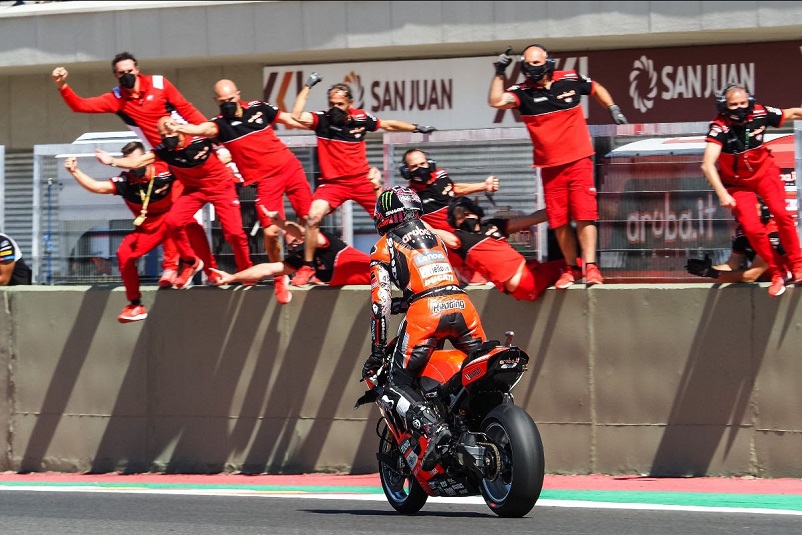 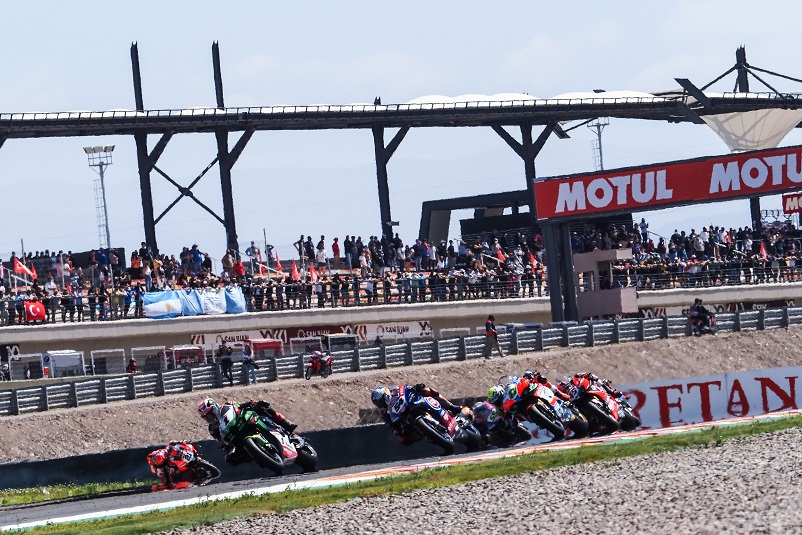 Race 2 for the MOTUL FIM Superbike World Championship at the Circuito San Juan Villicum as the Championship top three engaged in a hard-fought 21-lap battle during the Motul Argentinean Round as Scott Redding (Aruba.it Racing – Ducati) claimed his first victory since the Catalunya Round after withstanding a challenge from Jonathan Rea (Kawasaki Racing Team WorldSBK) and Toprak Razgatlioglu (Pata Yamaha with Brixx WorldSBK), with Rea taking four points out of Razgatlioglu’s Championship lead.

Jonathan Rea (Kawasaki Racing Team WorldSBK) got a good start from third on the grid while Toprak Razgatlioglu (Pata Yamaha with Brixx WorldSBK) led from pole position before the pair battled it out throughout the first three laps, with Rea taking the lead of the race briefly before being pushed down to third on the fourth lap of 21.

Redding moved up to second with a pass on Rea before passing Razgatlioglu into Turn 8 on Lap 5, while Axel Bassani (Motocorsa Racing) continued his strong form as he battled the Championship’s top three for a podium position.

On Lap 10 at Turn 7, Redding was able to overtake Razgatlioglu to move into the lead of the race, with Rea almost able to pass the Turkish star into Turn 8 but Razgatlioglu responded to keep second place.

The move allowed Redding to escape away at the front of the race after the thrilling battles, with the battle between Razgatlioglu, Rea and Bassani continuing. Rea cut back under Razgatlioglu into Turn 7 to briefly move into second place on Lap 14 but Razgatlioglu regained the position under braking into Turn 8. On Lap 16, Rea made the crucial overtake to move into Turn 1 but Razgatlioglu fought back until Turn 5 with the pair side-by-side throughout the sequence. After this, Rea was able to break away to claim second place ahead of Razgatlioglu, with Redding claiming his first victory since Catalunya Race 1.

P1 Scott Redding (Aruba.it Racing – Ducati)
“The thing is I didn’t feel that great and, in the beginning, there was a lot of fighting and then Bassani came past. I didn’t want to go back more, I tried to come back. I got quite aggressive, I said I would show my aggressive side if that’s what it needs to be. I got to the front and gave it all back. I started to get the rhythm again, I saw they were fighting again and then I didn’t make a mistake. I knew once I got through the first two sectors, I was safe with my pace. I just got a really good rhythm, corner after corner, and that was it and the rest was history.”

P2 Jonathan Rea (Kawasaki Racing Team WorldSBK)
“The position doesn’t really matter so much today. For me, it was all about the feeling on the bike and I want to thank my team so much, especially Pere because he never gave up investigating my problems. This weekend, and this race, we found something good. I could feel from the out lap I had a bike I could fight with today. Thanks to all the team. We won’t give up, we’ll keep working really, really hard. I enjoyed the race, I enjoyed it a lot. I enjoyed being here in Argentina, thank you to all the fans that came out.”

P3 Toprak Razgatlioglu (Pata Yamaha with Brixx WorldSBK)
“I am, again, very close to a triple win but I tried my best in the race. In the last three laps, I tried every lap, feeling the limit. Also, I tried for second position but after I settled for third position. I said this morning it wouldn’t be an easy Race 2 because everybody was very strong. I am happy. I am again on the podium.”

Championship Standings (after Race 2, Round 12)