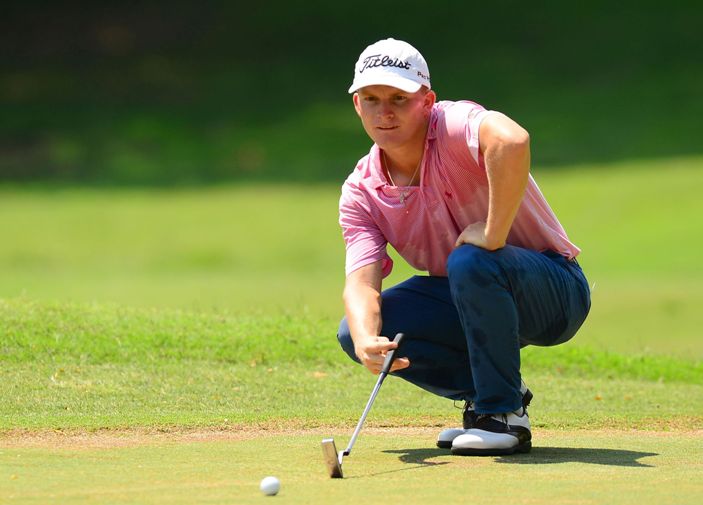 Freshman John Michael O’Toole tightened his grip on the title with an outstanding third round six-under-par 65, pulling four shots clear at the PGM Clearwater Masters on Friday.

O’Toole, who held a one-shot lead heading into the round, charged home with a brilliant back nine 30 highlighted by six birdies to lead on a 14-under-par 199 total at the Clearwater Sanctuary Golf Resort.

Thailand’s Poom Saksansin also carded a 65 to share second place with compatriot Ekthumrong Luanganuruk, who signed for a second consecutive 68 at the RM200,000 (approximately US$46,600) Asian Development Tour (ADT) event.

Sattaya Supupramai (66), also of Thailand, settled a further shot back in fourth place with Malaysia’s R. Nachimuthu (67) while Filipino Jay Bayron and Finland’s Janne Kaske sit in sixth place on 206 following respective rounds of 65 and 69 at the Clearwater Sanctuary Golf Resort.

O’Toole, playing in only his fourth event on the ADT, traded two birdies against two bogeys to turn in 35 before going on to nail six birdies on his way home, which included a chip-in from bunker on 14 and a 30-footer on 17.

“I have been playing my back nine very good all three rounds. I hit the ball well again today and I putted well too. Obviously in a good position for the final round but I can’t control my destiny. I just have to keep attacking and play my own game tomorrow,” said the 22-year-old O’Toole.

O’Toole, chasing for a breakthrough win, hopes to draw inspiration from the success of his cousin Casey, who won the ADT Order of Merit last season.

“I was influenced a lot by my cousin Casey. Seeing how he has excel on the ADT is an inspiration for me. I came to Asia also because I love to travel and visit new places. I will try my best again tomorrow and we will see how it goes,” added O’Toole, who notched a top-10 finish last month.

Poom credited his solid iron-play and his hot putter for a superb round which saw him sink six birdies against no bogey in what is the sixth stop of the ADT schedule this season.

“My iron-play was good and I putted solid. I had a long putt for birdie on 15 from about 10 yards. I think that was my best birdie today. Tee shots are very important on this course. I am really pleased with how I played. Hopefully I can keep playing how I have been playing tomorrow,” said the 22-year-old Thai, who claimed his maiden ADT win last October.

With the Olympic Games looming in August where golf will be reintroduced as a medal sport, players in the region could earn their spots in Rio de Janeiro by earning Official World Golf Ranking points through the Asian Tour and ADT.