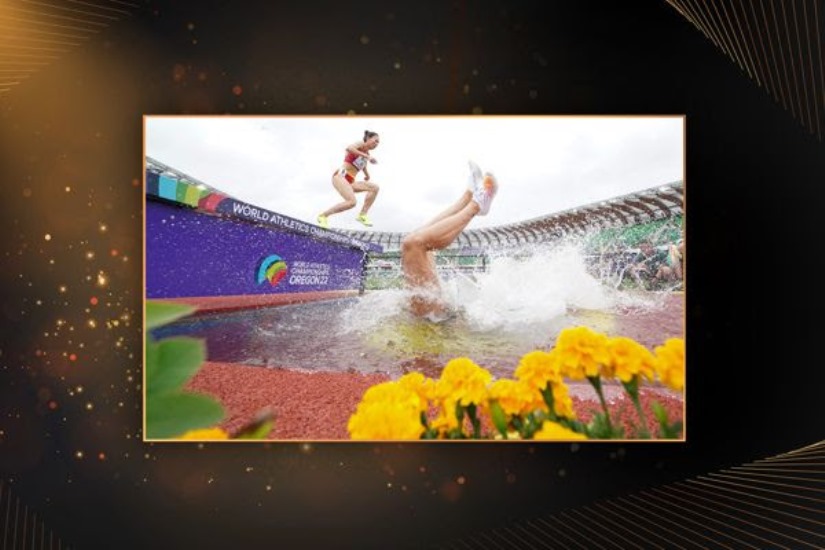 From the 110 images that were submitted, the panel of judges – comprising Valerie Adams, Raquel Cavaco Nunes, Ivo Gonzalez, Renaud Lavillenie and Pascal Rondeau – narrowed the entries to 26 shortlisted images and three finalists before deciding on the winner.

Rickett’s photograph captures Germany’s Lea Meyer falling headfirst into the water while competing in the heats on day two of the World Athletics Championships at Hayward Field.

It was taken using a remote camera placed two hours before the start of the session.

“I could see in the background that somebody had fallen, so I pressed the remote to trigger the camera, but didn’t know if the camera had actually fired,” explained Rickett, shooting for PA Media. “I then had to wait until the end of the session to retrieve the camera and that was a very nervous walk, to see how the images had turned out.

“Thank you to World Athletics for putting on this competition. It’s great that athletics specialist photographers have their work showcased around the world.”

Although somewhat frustrated to have fallen at the World Championships, Meyer, the athlete in the picture, says the moment was a symbolic one of her season.

“When I tripped over the barrier, it was a bit of a wake-up call,” she said. “It showed me that, even when I’m in good shape, I still have to make sure I concentrate and have to be 100% focused during the race. I still finished the race, and my time wasn’t even that slow. Ultimately that provided me with the confidence that if everything does come together and I am fully focused, I can deliver when it matters. And that’s exactly what happened a few weeks later at the European Championships in Munich (where she won the silver medal).

“While it may not have been the best moment for me personally, the photo itself is incredible,” she added. “And in hindsight the photo in a way encapsulates how my whole season turned out. 2022 has been a rollercoaster of ups and downs for me, and it illustrates how every time I do fall – literally or figuratively speaking – I always get back up.”

Rickett is an award-winning sport photographer based in Manchester, UK. Since joining PA Media in 2001, he has covered multiple Olympic and Commonwealth Games, World Athletics Championships and European Championships, as well as many other sports and events.

Other winners already announced as part of the World Athletics Awards 2022 include Gennadii Zuiev (Coaching Achievement Award), Donna Fraser (Woman of the Year) and the Ukrainian Athletic Association (President’s Award). Further announcements will be made in the coming days, ahead of the World Athletes of the Year and Rising Stars being revealed on Monday 5 December.