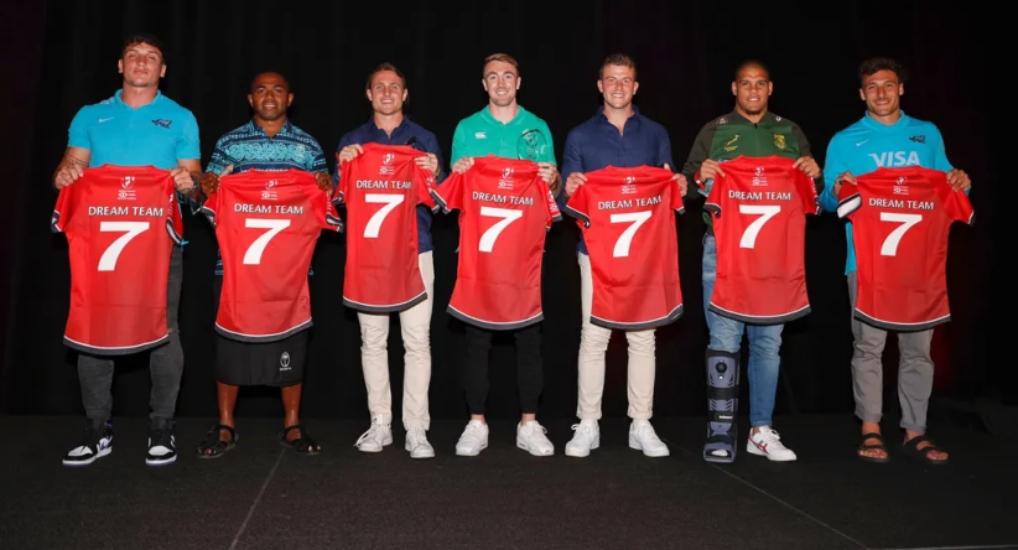 The outstanding performers of the 2022 Series were honoured at a ceremony held at the Torrance Marriot Redondo Beach hotel on Sunday evening following the ninth and final round of the men’s 2022 Series.

The awards recognise and celebrate the players and teams who have performed at the highest level across the 2022 Series and produced the most memorable moments that thrilled and inspired fans around the globe.

Aside from the Men’s Try of the Series, which was voted for by fans on social media from a list of three nominees, winners have been selected by the World Rugby Sevens Series Awards panel, comprising former international sevens players and Series commentators, across the eight categories.

This award goes to a player who has made their HSBC World Rugby Sevens Series debut in the current season and delivered an outstanding performance.

All three nominees came from Australia with the winner Corey Toole the only one of the trio not to have previously featured at the Olympic Games Tokyo 2020.

Toole made his Series debut for Australia sevens at the first round of the 2022 Series in Dubai, alongside his fellow nominees Henry Paterson and Dietrich Roache.

Toole finished the Series as the second leading try scorer with 43 tries, breaking the record for an Australian player and also the most by a rookie player in 2022.

Jamie Farndale’s try against New Zealand in Toulouse was voted by rugby fans worldwide as the Try of the Series. The other nominees were Henry Paterson for the overtime try against New Zealand in London that gave Australia their first title since Sydney 2018, and Argentina’s Felipe Del Mestre against Fiji in Vancouver on the way to winning their first title since San Diego 2009.

This award is given to the player or team who has shown the ability to perform under the unique and intense pressure of top-level rugby sevens. This award was voted for by the panel and went to Henry Paterson for his match winning try in overtime against New Zealand in the London Cup final.

The other nominees were Argentina for their incredible cup final win over Fiji in Vancouver, and France for their extra-time win against Samoa on home soil in Toulouse.

This award is for the player who demonstrated the most consistency and delivered the greatest impact against four key criteria – carries, offloads, line-breaks and tackles.

This year’s winner was Corey Toole of Australia, who made 161 runs, 75 tackles and 45 breaks throughout the season.

This award celebrates the team that has upped its performance and climbed the rankings throughout the season. Results have been tracked throughout all the rounds, and Argentina have ranked first in the 2022 Series, which included only their third ever title, and first since 2009, as they overcame Fiji in an epic final in Vancouver.

Corey Toole – Toole made his Series debut for Australia sevens at the first round of the 2022 Series in Dubai, and finished the Series as the second leading try scorer with 43 tries, the most by a rookie player.

Terry Kennedy – Led the Series in the number of tries, assists and carries, and was second in  line breaks behind Corey Toole.

Marcos Moneta – The 2021 World Sevens Player of the Year scored 10 tries to help Argentina to victory in Vancouver where he was awarded HSBC player of the final. He scored 38 tries in total during the 2022 Series, despite missing the final round in LA.

Nick Malouf – The Australia captain led his team to the Series title and contributed 8 tries, 11 clean breaks, 82 tackles and 74 carries throughout the 2022 Series.

Waisea Nacuqu – In his eighth season on Series, Fiji’s talisman was awarded the HSBC Player of the Final in Toulouse. During the 2022 Series he scored 230 points, 24 tries, 19 clean breaks, 85 carries and 62 tackles.

Luciano Gonzalez – A key member of Argentina’s impressive campaign which involved a first cup win since 2009. He recorded 30 tries, 32 clean breaks, 39 tackles and 173 carries – the second highest in the Series.

The Fair Play Award is selected by the match officials and recognises the team who showcase rugby’s values of integrity, passion, solidarity, discipline and respect. This year’s recipient was Japan.

World Rugby Chief Executive Alan Gilpin was in attendance at the awards and said: “On behalf of World Rugby, I would like to congratulate all HSBC World Rugby Sevens Series 2022 award winners.

“There was some truly sensational rugby sevens played across the Series and audiences were entertained by the speed, skill and all-action drama of sevens, capturing the attention of new players and fans worldwide and inspiring young boys and girls around the globe to get involved in rugby.

“It was a fantastic marker of the highly competitive nature of international rugby sevens to see four teams still in with a chance of winning the Series title heading into the crucial final round in Los Angeles.

“With Rugby World Cup Sevens 2022 in Cape Town kicking off on 9-11 September and the Olympic Games Paris 2024 less than two years away, the future of rugby sevens is very bright.”

Australia’s triple award winner Corey Toole said: “I’m really honoured and grateful to receive these awards. I think it just reflects how the team has been all year, we’ve built something special and it’s been a big twelve months for the team and we’ve been lucky enough to have a pretty successful year.

“Our ambitions in rugby sevens are pretty big. We’ve got the World Cup coming up and hopefully we can have a strong performance there and then get ready for the next Series season.” – WORLD RUGBY