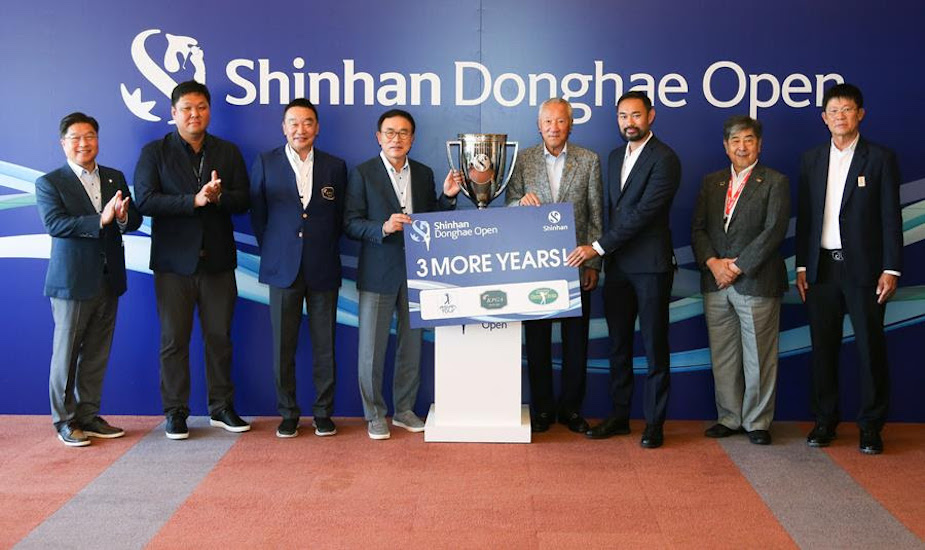 At an important signing ceremony today at the Shinhan Donghae Open officials proudly announced that the prestigious tournament, one of Korea’s flagship tournaments, will be sanctioned with the Asian Tour, Japan Golf Tour Organisation and Korean PGA Tour for an additional three years, from 2023 to 2025.

Japan’s Kazuki Higa won the event after a thrilling final round, which was played in Japan for the first time in its history, at Koma Country Club, and is the only tournament tri-sanctioned by the three Tours.

The popular Shinhan Donghae Open first became part of the Asian Tour in 2016, when Indian star Gaganjeet Bhullar was triumphant, and since then it has become an integral part of its schedule.

“The Shinhan Donghae Open is one of the solid, standout pillars of our schedule,” said Cho Minn Thant, Commissioner and CEO, of the Asian Tour.

“We are truly honoured that the Shinhan Financial Group have chosen to collaborate with us for many more years, which allows us to continue to grow the tournament into a regional property, attract even bigger audiences and further help facilitate the growth of the game in Asia.”

“This week we heard former champion Gaganjeet Bhullar explain that just by being here and seeing the Shinhan Donghae branding on the course inspired him and made him realise just how much the tournament is close to his heart. This speaks volumes about the significance of the tournament, and its partners and organisers.”

It was hosted in Japan this week as Koma was overseen by Shinhan Financial Group’s founder Heuikeon Lee in the 1980s and the impressive venue is a special place for the Group.

Chairman and CEO of Shinhan Financial Group, Yongbyoung Cho said he hopes the tri-sanction agreement will continue the tradition of allowing each Tour player the chance to compete beyond the barriers of their country; in line with the Shinhan Donghae Open’s slogan: “To Continue The Tradition and Open The Future”.

Travel restrictions caused by the global pandemic meant it could only be played as a domestic event in 2020 and 2021, but the tournament, which this week saw some remarkable golf and low scoring, has returned to the international arena with a vengeance.