Home 2022 Shiv Kapur leads Yeangder TPC after a bit of help from Chan... 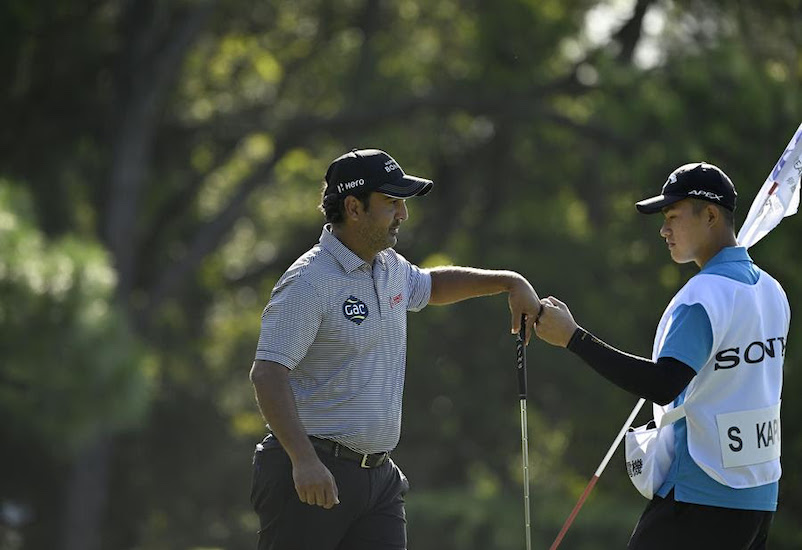 India’s Shiv Kapur grabbed the lead in the US$700,000 Yeangder TPC today by carding a brilliant eight-under-par 64 on day one – in an event the marks the first time the Asian Tour has visited Chinese-Taipei in three years because of the COVID-19 pandemic.

The four-time Asian Tour winner overpowered the course with an eagle, eight birdies and just two bogeys at Linkou International Golf and Country Club, in Taipei.

Chinese-Taipei’s irrepressible star Chan Shih-chang and Malaysian Ben Leong came in with 66s, with India’s Ajeetesh Sandhu and Prom Messawat from Thailand, both former winners of this event, firing 67s, along with Thailand’s Nitithorn Thippong, a two-time champion this season, Chinese-Taipei’s Lu Sun-yi, an amateur, Lee Chieh-po and Lin Keng-wei, and Miguel Carballo from Argentina.

“I putted really well, I have a local caddie out there, whose name is Su [Su Ching-hong, a National team player], who was arranged for me by James Chan [Chan Shih-chang] and the Tour and he is reading the greens really well, so I am just trusting him,” said Kapur, who won the Yeangder Heritage here on the Asian Tour in Chinese-Taipei in 2017.

“I have always struggled around the greens here after all these years, but I am holing putts and he was a big help today.”

His round started on 10 but his game really got going on his second nine when he eagled the first before making birdie on the next four.

He added: “Season so far has been a bit lack lustre, struggled with injuries in the middle of the season. My game has been close, but it has been very frustrating. I have been making a lot of cuts but not been playing well at the weekend. I feel like I was close, and I was looking for a low round and I could not have asked for a better start.”

The Indian star suffered a foot injury and was out of action for five weeks in the middle of the season but luckily did not miss too many events because it was in the summer.

“I tried to make compensations and so I lost my swing a little bit.  I feel like it is coming back for the business end of season, two good weeks here will set me up rest of the year,” he said.

Chan is the leading player from his country on the Asian Tour Order of Merit in 21st place and has been in resplendent form since the Asian Tour restarted at the end of last year, winning the Blue Canyon Phuket Championship, which was the Tour’s first event back. He also won the Royal’s Cup this season in Thailand for his fourth Tour win.

He said: “I felt comfortable out there, my caddy Chen Ming-hsin [a local professional whose home course is Linkou] and I worked well together today. He read the greens well and that helped me a lot. I haven’t been able to get my chipping feeling right over the last few days so wasn’t able to get it close but still managed to sink a few putts.”

A first Asian Tour victory on home soil is high on his list of priorities and that goal began well today with a round made up of seven birdies and one dropped shot, where he was also helped in a big way by his experienced caddie.

“I was just aiming to shoot six or seven under today,” he said.

“The greens are slower in the afternoon and it was pretty windy when I started. It got calmer when I got to the last three holes. The greens are softer than before. I knew I needed to putt well here. That’s why I called Chen to help. He’s really familiar with the greens here. I took his advice on a few holes today and they worked out well.”

Two weeks ago, Leong was in contention at the Shinhan Donghae Open in Japan after a third-round 65 but disappointingly fell back on the last day with a score that was 10 shots worse.

“Had a bad final round in Japan, but it’s a new day, a new week, definitely trying to look at the positives,” said Leong, who has a proven-track record playing here as he tied for sixth in 2010 and 2018.

He recorded seven birdies and one bogey today.

“My misses where good, if you miss shots but they are still on the fairway then that helps. I was really solid to be honest and made my fair share of putts.”

Sandhu won here in 2017 and despite a solid start he felt there is still plenty to work on.
“I eagled the first but then cooled down after that. I didn’t play my best today, but I scored ok. Everything thing was average,” he said.

“Conditions were quite easy, there was no wind, and the greens have improved. It was quite scorable out there. I’ll just need to play better tomorrow.

While the Tour’s big-name players jostled for position, much of the attention also focused on Chinese-Taipei’s Hsieh Cheng-wei. The 14-year-old amateur, whose home course is this week’s venue, returned an impressive 69, which included birdies on first three holes. It beat his best score around the course by a shot.

That score upstaged Asia’s most celebrated amateur Ratchanon “TK” Chantananuwat – who was making his first start on the Asian Tour since June and came in with a 72.

Back in April Thailand’s teenage golf sensation, who is now 15 years old, claimed the Trust Golf Asian Mixed Cup – becoming the youngest male player to win on one of the game’s major Tours.

The pair played a practice round together earlier in the week, a game that offered an exciting look into the future of Asian golf.