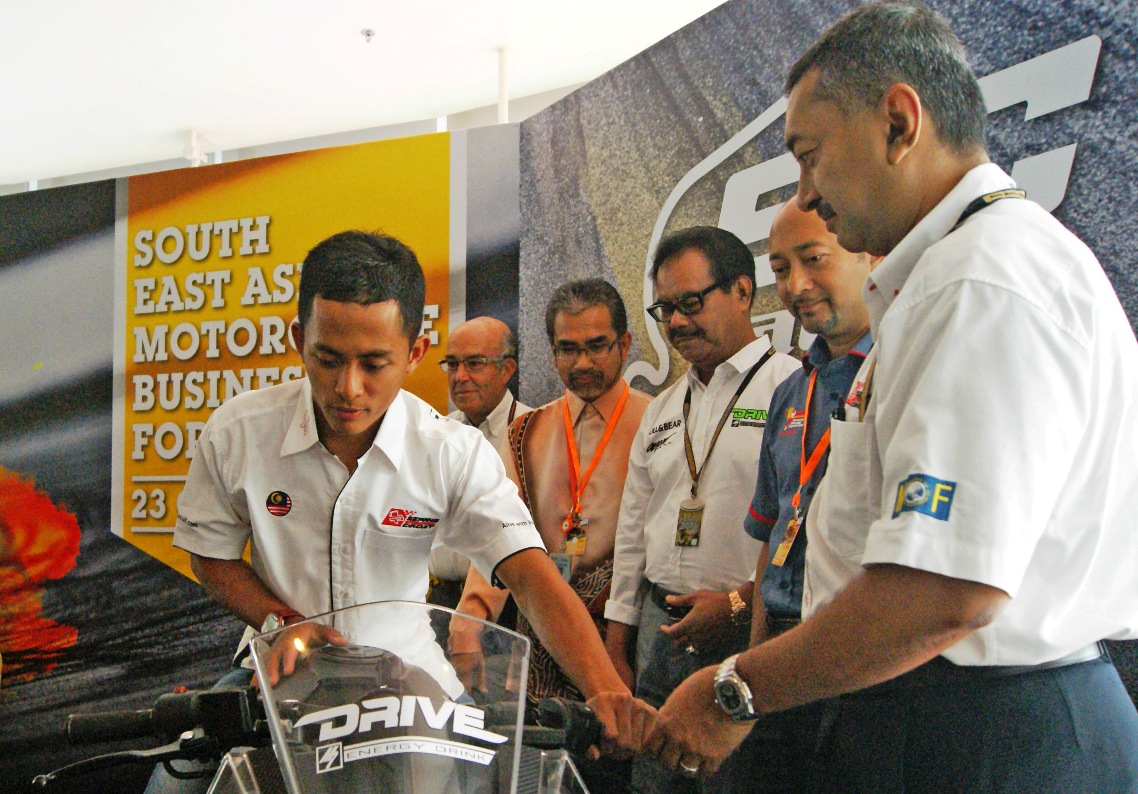 Sepang International Circuit (SIC) today announced the successful registration of two entries in the Moto3 category for the 2015 World Championship – the first time in SIC history it is registering as a team in a world championship. The first rider was revealed as Malaysia’s MotoGP hero Zulfahmi Khairuddin, in the announcement made here at the Sepang Circuit concurrent to the 2ndSoutheast Asia Motorcycle Business Forum, leading up to the Shell Advance Malaysian Motorcycle Grand Prix from 24 to 26 October 2014.

“This registration by SIC brings our commitment to growing the two-wheel racing ecosystem in Malaysia to the next level, a step up from our initiatives in the last five years, since 2010. This move marks the next phase of our investment into developing motorsports in the nation. With the entries registered under Sepang International Circuit, we can now test extensively at the circuit in November this year and February and March next year, ahead of the 2015 season’s opening race in Qatar,” said Dato’ Razlan Razali, Chief Executive Officer of Sepang International Circuit.

Dato’ Razlan said the testing phase is the ideal time to build a strong supporting team of skilled talents including race engineers, mechanics and crew. This will give SIC the added advantage of an experienced team that works seamlessly as a single entity for better performance during the season. “The entries also pave the way for our own brand of rider development, team management, long-term talent development, sponsorship and brand assets management. As a company incorporated under the Ministry of Finance Malaysia, we want to create a fully Malaysian team in the future, in the interest of nation building. Currently, we are starting by creating value and opportunities for other Malaysian companies, to associate with our team,” added Dato’ Razlan.

“We decided to sign up Zulfahmi as our first rider as he is still very much relevant to Malaysian motorsports and MotoGP, particularly having held on to his record as the fastest Southeast Asian rider in the Moto3 category. We believe in the importance of starting a new venture on the right track with an experienced rider. Certainly, we are aiming to be very competitive in our first year, with a target of breaking into the Top 10 in the 2015 championship, if not the Top 5,” said Dato’ Razlan, who made the announcement witnessed by partners from Mutiara Motors, Tourism Malaysia and the Ministry of Youth and Sports Malaysia.

Zulfahmi, 23, most recently of the Ongetta-AirAsia team, will be competing on the 2015 KTM Moto3 250 GPR motorcycle. The bikes are fitted with the KTM 250cc liquid-cooled single-cyclinder 4-stroke engine, which provides maximum power above 55hp and maximum speeds in excess of 230km/h.

“It has been reported that Southeast Asia is currently the world’s third largest market in the two-wheel vehicle industry. Thus, the time is ripe for individuals or corporations to make the push to gain a foothold in the industry – regardless if they are central to two-wheel motorsports or from peripheral industries. The forum is a golden opportunity for delegates to interact with and learn from leading figures in the industry, listen to new ideas, debate current issues and network with other like-minded people. This year’s forum builds on the success from last year, proving that we are moving in the right direction – taking SIC far beyond merely organising races, towards empowering the motorsports industry ecosystem as a whole,” commented Dato’ Razlan.

“Motorsports-related business has been growing rapidly and more stakeholders are now participating in the thriving two-wheel racing landscape. SIC is proud to have initiated the Southeast Asia Motorcycle Business Forum, which is the first of its kind in the region. The forum has allowed industry leaders to network amongst themselves and with stakeholders of all levels, thus moving the business of motorsports to the next level. This forum is also a prelude to the bigger Motorsports Business Expo that SIC is organising in 2015. The delegates present today can already sign up for the expo in advance – regardless if they are from industry or non-industry related fields,” added Dato’ Razlan.