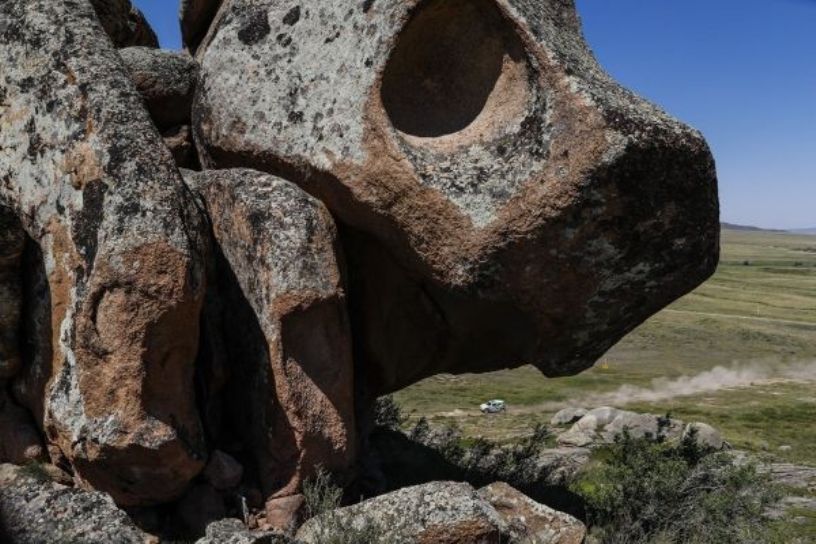 Stage 5 of the 2016 Silk Way Rally from Moscow to Beijing saw the MINI ALL4 Racing pairings return to strong form after a challenging day of racing yesterday.

Today’s stage, from Astana to Balkhash, saw a reversal of fortunes though with three MINI ALL4 Racing finishing the leg inside the top four. There was also a change in early race leader.

The longest stage of the race was still eventful for the leading MINI ALL4 Racing #103 of Yazeed Al Rajhi (KSA) and Timo Gottschalk (GER) though. Despite suffering from three punctures at different stages of SS5 and then stopping to clean the screen due to the amount of mud making it difficult to see the road, they still completed today’s section of the 2016 Silk Way Rally from Astana to Balkhash in second position.

This sees the pairing move up from 6th position in the overall classification to 3rd, and they are confident of making up further time in the next stages to challenge for the lead.

Al Rajhi said: “I think this was the longest stage in my life because it is not only long but also technical; it’s very difficult when you have a stage like that. The goal today was to attack and I told my co-driver that the aim was to finish 3rd. He was not sure that we could do it, but I told him to fasten his seatbelt and enjoy the drive! After 50 or 60k we caught up to Cyril [Despres] and then it was attack, attack, attack to pass him, but after 80/90k we have first puncture, after 150k we have second puncture and at 180k to 200k third puncture. Even after that and stopping to clean the mud from the screen, we finished 2nd, which was better than our target!”

Today’s stage was also good for  the #106 MINI ALL4 Racing of Aidyn Rakhimbayev (KAZ) and Anton Nikolaev (RUS) who secured a top three finish, just behind Al Rajhi to consolidate their 5th position overall.

The true reversal of fortunes though was that of the #105 MINI ALL4 Racing of Harry Hunt (GB) and Andreas Schulz (GER). They drove a strong and steady stage to finish today in fourth, making up 20 of the 23 places they lost in the overall standings yesterday in just one leg. Now sitting in 12th position, Hunt is determined to break back into the top 10 in the next stages.

Hunt: “Today was good; it was the longest stage I’ve ever done, so it was interesting. We had a couple of small issues but nothing major so it was a nice and steady pace for a good finish.”

Just two places behind the British driver today was the #101 MINI ALL4 Racing of Vladimir Vasilyev (RUS) and Konstantin Zhiltsov (RUS) who crossed the line in sixth place to secure 4th position overall.

Co-driver Zhiltsov said: “Today was a good stage, even though it long and very physically demanding after only two hours sleep. The last 50k was very fast and dusty so we wasted a lot of time with braking, but the race is not finished yet. I think the real race will start after the Chinese border!”

The final MINI ALL4 Racing of Bauyrzhan Issabayev (KAZ) and Vladimir Demyanenko (RUS) ended the day in 13th to consolidate a top 10 position overall.

The Silk Way Rally action continues tomorrow as the teams make their way from Balkhash to Almaty for stage 6 of the 15-leg race that crosses 3 countries.