Home 2022 Simply Red for Madey and Nitithorn in Round 1 of International Series... 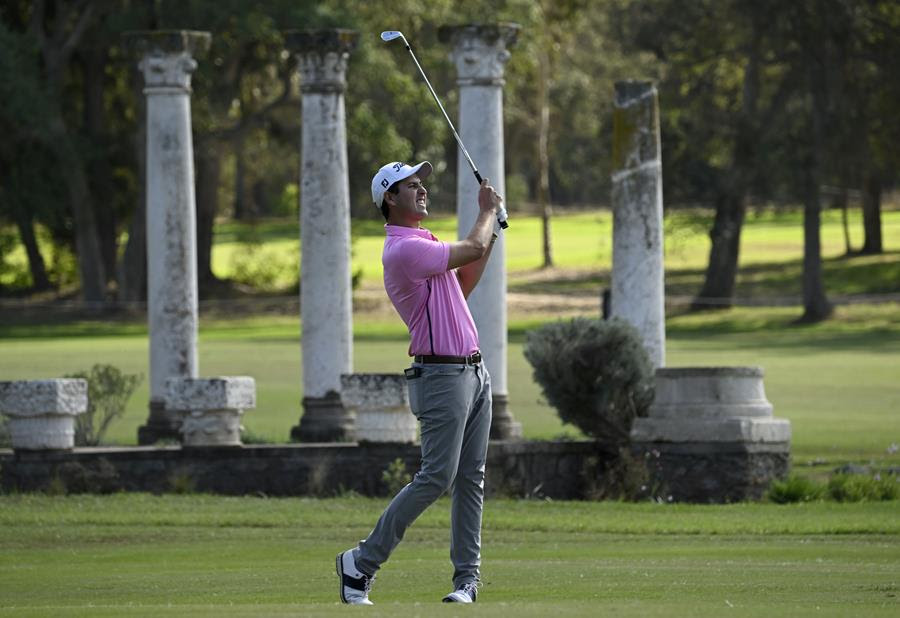 Not much is known about American Cole Madey on the Asian Tour – this week’s inaugural US$1.5 million International Series Morocco is only his third event on Tour – but based on today’s opening round of six-under-par 67, which gave him a share of the clubhouse lead with Thailand’s Nitithorn Thippong, it looks like he could be a player to look out for in the future.

An eagle and four birdies put Madey in control at Royal Golf Dar Es Salam with Nitithorn, ahead of Englishman Steve Lewton who carded a 68 – helped by a brilliant eagle on the par-four 13th where he holed a 127-yard wedge shot from a fairway bunker.

Madey is 25 years old and after graduating from UCLA he turned professional in 2019 with high hopes of travelling the globe and playing golf but the COVID-19 pandemic immediately scuppered those plans.

However, he was able to get back on track last year and play the PGA Tour Latin America before also getting a couple of starts on the Asian Tour in March this year in Thailand.

“With things shut down for a couple of years I didn’t really get my feet wet in professional golf,” said the American.

“But now I am starting to travel and play pro golf, learning how to manage my time and so on. I have been learning a lot and the events I played on the Asian Tour in Thailand were great and now I am here, I love to travel, and the Asian Tour is an incredible organization.”

A six under round with no dropped shots is an impressive performance on the testing Red Course at Royal Golf Dar Es Salam. Madey felt he was helped by the fact that the course reminds him of a favourite layout in the US.

He said: “I love the course, it reminds me of a course I played in the States, called Saticoy Golf Club, where the greens are extremely undulating, and unforgiving on some approach shots meaning the ball can spin off the green. I really like it, I am from the North-West where there are also a lot of trees, it suits my eye.”

He made his first birdie on seven, eagled the par-five eighth, and birdied 13 before closing with birdies on 17 and 18.

“I putted pretty solid,” he said.

“My driver was a little shaky in the beginning. I made all my four footers which was important. There are some huge slopes so it’s important not to try and leave yourself too much work with 30 or 40 footers.”

Nitithorn has been victorious twice this season – in The DGC Open presented by Mastercard and the International Series Singapore – and joined Madey on top of the leaderboard late in the day with an eagle on the driveable par-four 17th and a birdie on the par-five 18th.

“I feel good. I didn’t know my score until I made eagle on 17, when I then realised I was five under,” said the Thai golfer, who made six birdies in total and two bogeys.

“I was really in the zone today so wasn’t keeping track. I drove the ball so well and that’s key for me around this course. I played good golf today.”

On the penultimate hole he hit a miraculous tee shot to two feet to set up the eagle.

Lewton last played Royal Golf Dar Es Salam 13 years ago, when he says it was a very different layout.

“It’s changed a lot. I don’t remember the greens being this sloppy. They have made some changes, which have been brilliant,” he said.

“It is a tricky golf course this week, rough is kind of up, it is playing kind of long and the greens are tricky. You have got to control your golf ball. I didn’t have a great lie in the bunker on 13, I was trying to hit it as good as I could, and it came out well and I thought it would be close but with a bit of luck it went in.”

Puig’s good start caught the attention of many as this is only his second event as a professional having joined the play for pay game in September.

“I didn’t play a tournament since September, which was the LIV Golf event in Chicago, so it’s been a month and a half of complete grind on the driving range,” said the 20 year old former amateur star at Arizona State University.

“I played pretty good. I think I am swinging the club better. I worked pretty hard, you know I usually struggle a little off the tee, but I hit it pretty good off the tee which helped, so I am pretty happy with the round overall.”

Puig played the back nine first and struggled with his game making the turn in one over but was a different player on his second nine carding birdies on one, three, five and eight shooting a four-under-par 32.

He has spent his time off in the States working with golf coach Dave Philips and Sean Drake, an athlete chiropractor.

He added: “I think we did a really good job the last month and a half. I am excited to keep going this week and next week. They (Philips and Drake) are both very good, they know each other, they are connected, so what I needed to improve on the course I practiced it with the chiropractor, with helped with technique and everything.”