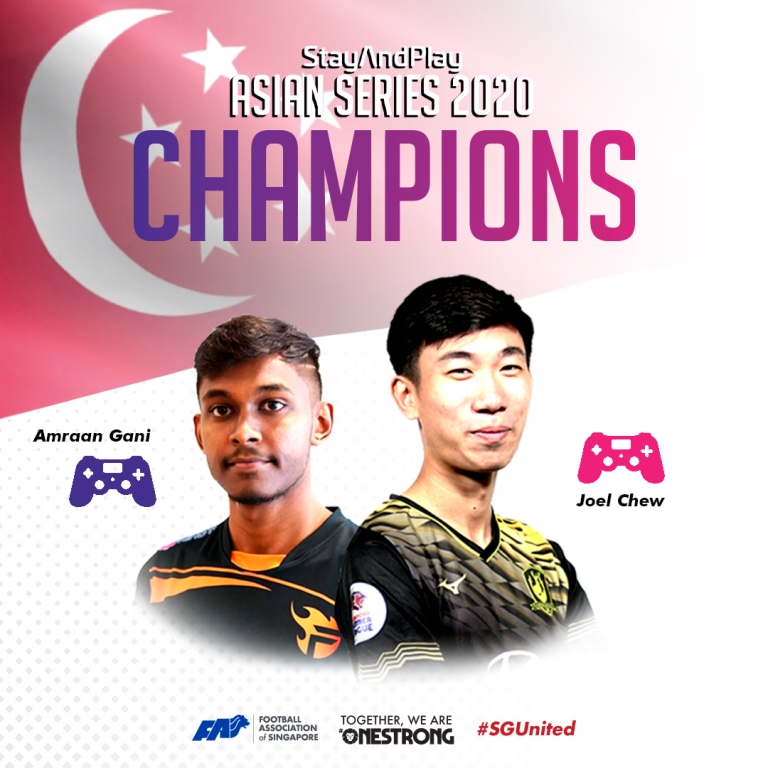 Singapore have been crowned champions of the inaugural StayAndPlay Asian Series 2020 after three thrilling days of virtual battle.

Tampines Rovers midfielder Joel Chew and Team Flash’s Amraan Gani, a professional eSports player, teamed up to triumph over Japan, Malaysia and Chinese Taipei in the quadrangular FIFA20 friendly tournament. This was put together after FIFA’s eNations StayAndPlay Cup was postponed, with Singapore having confirmed their participation.

The four teams played once against each other in a single round-robin format that started on Monday and carried over to Tuesday and Friday to crown the winner. Each match was played twice: once between the eSports players and the other between the player representatives from each of the opposing countries.

The Singapore duo saw off Chinese Taipei 5-2 on aggregate on the first day before posting 7-0 and 4-0 wins respectively against Malaysia, which featured Safawi Rasid and Japan, who had Shinji Okazaki. This meant that Chew and Amraan comfortably topped the group (see table below) to finish as champions.

A beaming Chew said, “I just want to thank everyone for supporting us and even though it may not be real football, it was something to entertain everyone… and we are glad to bring home the win for the country.”

Amraan added, “We are really proud that we won this for Singapore, it’s a great feeling to represent the country and win, I’m very happy about it.”

We also congratulate Chew and Amraan for representing Singapore with distinction and emerging as overall winners.