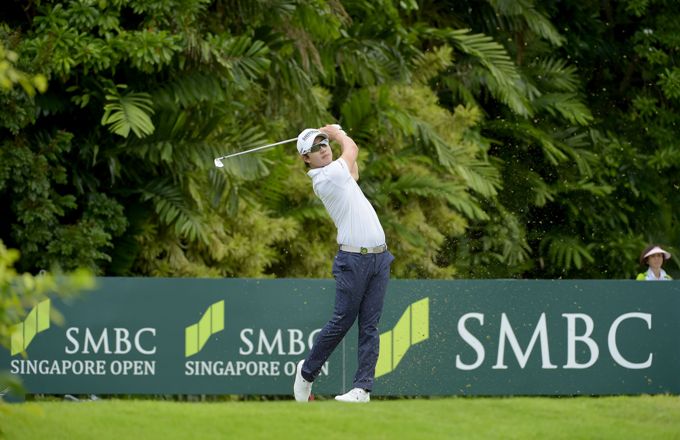 Korea’s Younghan Song surged up the leaderboard after carding a sparkling eight-under-par 63 in the second round of the weather-hit SMBC Singapore Open on Friday.

Play was suspended because of inclement weather at 3.06pm (local time) and could not resume due to thunderstorms and lightning activities around the Serapong Course at Sentosa Golf Club.

A total of 78 players, including world number one Jordan Spieth and Byeonghun An who completed seven holes, will return to finish their rounds at 7.30am on Saturday morning with round three scheduled to start immediately upon the completion of the second round.

An was at seven-under while Spieth traded one birdie and one bogey to stay at four-under after six holes, five shots back of Song at the US$1 million event which is co-sanctioned by the Asian Tour and Japan Golf Tour Organisation (JGTO).

“I didn’t get off to a great start but made a good birdie on number two. That’s golf, that’s weather, you can’t control that. I could tell it was bad on other parts of the course,” said Spieth.

Song was on fire as he marked his card with seven birdies, one eagle and a bogey to establish a two-shot advantage over Japan’s Shintaro Kobayashi with his two-day total of nine-under-par 133.

The Korean stormed off the blocks quickly in the morning, going to five-under after four holes with two birdies and an eagle-three on four.

He charged towards the turn with another two birdies on seven and eight and continued to set the scorching pace with another pair of birdies on 10 and 11 before a bogey-five on 12 put the brakes momentarily on his charge.

After three straight pars from 13, Song sunk another birdie on 16 before reaching home comfortably in 63.

“It was a superb round and I really have to thank my excellent putting for putting me in this position.

“The goal is to win the tournament this week and for now, I just want to take a good rest before I come back again and hopefully play well like what I did today,” said Song.

Kobayashi meanwhile showed no signs of fatigue despite having to return early to complete his first round which was also suspended due to lightning yesterday.

The Japanese followed up his opening effort of a 66 with a 69 to put himself in a commanding position for the weekend rounds.

The 29 year-old had slightly more than an hour of rest before he was back at the tee again.

The Japanese went out in 35 after three birdies and two bogeys and would make another birdie on 17 to sign for a 69.

“I didn’t feel tired at all today. Maybe because it was cool in the morning and it only started to get a little hot and humid as the day went on.

“I feel comfortable on this course and if I continue to play like what I’ve done, anything can happen,” said Kobayashi.

Leading scores after round 2 of the SMBC Singapore Open being played at the par 71, 7398 Yards Sentosa GC course (am – denotes amateur):