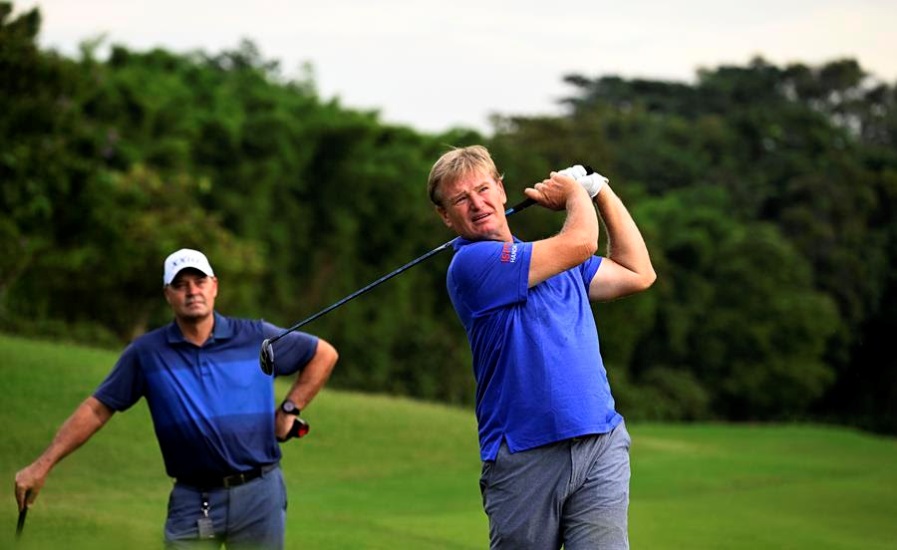 But one star player stands out more than any other, and in more ways one, here at Royale Jakarta Golf Club, the “Big Easy” himself Ernie Els.

Now 53 years old and a regular on the Champions Tour he is making a popular return to the region, where he has enjoyed great success, winning three times on the Asian Tour.

“I obviously want to try and play well, feel like I am swinging it good, it’s really coming out beautiful, there is a bit of doubt here and there. I am just getting my club back on plane, I was a little inside, a little deep. It feels good when I make good contact.”

He finished second here in 2013, when Wiesberger won, and despite not playing much recently he feels his game is in good shape.

Added the four-time Major winner: “I have been playing really well, I played over on the Champions Tour, I had 13 top-10s out of 20 something events. I ran close a couple of times, but I never got a win. I really am looking forward to next year, the competition is strong out there.

“I haven’t played in a month, I have just been playing a bit of social golf, in South Africa. I am trying to find something, but it’s okay, I am just enjoying myself out here, with my friend Nico [Van Rensburg] on the bag, he played in Asia for a long time.”

In Van Rensburg he could not have a better man to help guide him as he played regularly on the Asian Tour in the 1990s, winning three times, and thrilling galleries with his eye-catching big-hitting game.

“Nico is great, we have known each other since childhood, so it’s nice to have him on the bag. He’s loving it because he is seeing some of his old mates,” said Els, who mentioned Van Rensburg works on his charitable projects, and “raises a hell of a lot of money and does a hell of a good job.”

Els’ last big win on a main Tour came at the 2013 BMW International Open in Europe, while his two wins on the Champions Tour came in 2020, but don’t be surprised if the big man with deft touch adds some more silverware to his bulging trophy cabinet this week, in what is the season-ending event on the Asian Tour and last of the year’s seven International Series contests.