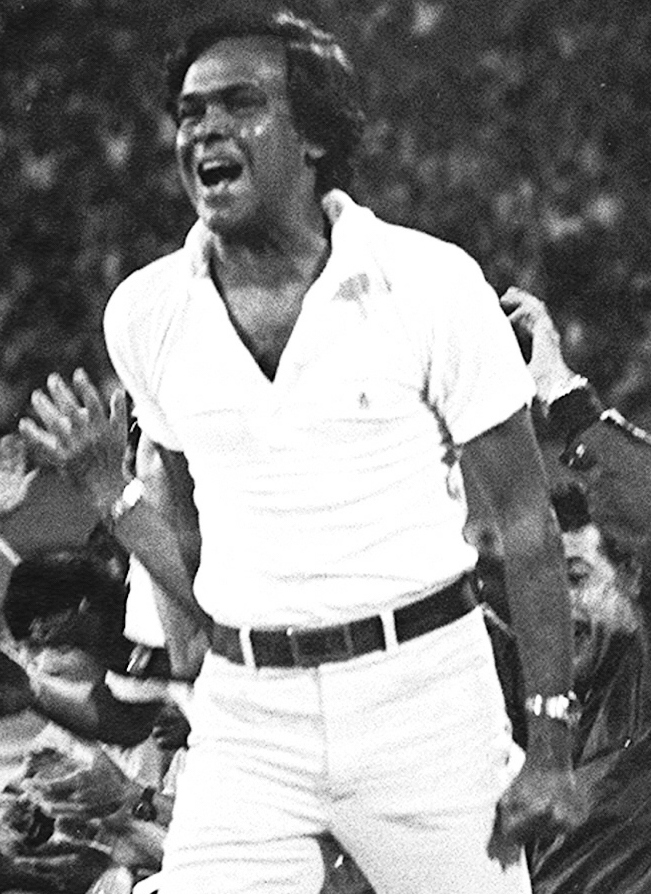 I’VE had many requests from die-hard football folks to urge the authorities to have a celebrated statue of Nadesan “Mr Kallang Roar” Ganesan at the entrance of Jalan Besar Stadium, the “Home of Football”.

Sometimes, as they faithfully and honourably do in England, sculptors aim for memorable movement, as with the rather good special sculptures of Sir Stanley Matthews outside Stoke’s Britannia Stadium, or the muscular depiction of Tom Finney at the National Football Museum. They seek to immortalise the famous in heroic mode like even the one of Sir Matt Busby and Sir Alex Ferguson along the “Theatre of Dreams” at Manchester United.

How about, this week on the first death anniversary of Ganesan, Sport Singapore (SportSG) or the Football Association of Singapore (FAS) seriously look at paying tribute to this legendary former football boss?

Gani, as he’s popularly known, passed on 365 days ago, on July 1 2015, to be exact, standing tall as a sportsman extraordinary and later Singapore’s most famous football icon, of “Kallang Roar” fame.

Few in Malaysia or Singapore ever came close to his passionate football drive or motivation to achieve success, wherein in the mid-1970s, he almost single-handedly created “The Kallang Roar” after the 55,000-capacity National Stadium was opened in 1973. His extraordinary “passion” for the football product, technology, or tasks at hand boiled down to his mantra over four words:  Fire in the belly.

In his dictionary, like Sir Alex Ferguson or Sir Matts Busby, fire-in-the-belly simply means you’re ready to fight with energy and determination for what you believe is right. And that’s something he repeatedly bellowed to the greatest Malaysia Cup players of the mid-1970s (when the legendary Lions won the Malaysia Cup in 1977 and 1980). He always had the strongest determination to win, to overcome whatever odds and, unfailingly, to give off his best shot.

He’s gone. The man they hailed the “Kallang Roar”. The special Singapore football icon who dared to be different. The criminal lawyer who spoke balls from dawn to dusk. The sporting gentleman who truly cared for football.

But it’s time to seriously think of an immortal recognition of him as the first star-statue along the corridors of Jalan Besar Stadium.

The former Football Association of Singapore (FAS) Chairman from 1974 to 1981, Gani sensationally fired an extraordinary “Kallang Roar” period that saw Singapore passionately win two Malaysia Cups (1977 and 1980). And he made the boldest decision for football when in 1974, he defyingly switched Malaysia Cup home games from Jalan Besar Stadium to Kallang’s National Stadium.

Legendary football mega-striker Quah Kim Song recollects: “People were skeptical over whether the stadium could be filled but Ganesan took the plunge. We are forever indebted to him for kick-starting a golden period of Singapore football.”

Few give him the right credit the way he formulated a major breakthrough in the National Football League, revamping it from 118 clubs to a strong 30, and launched the Lion City Cup, in the late 1970s, an Under-16 tournament that unearthed budding talents like Fandi Ahmad and V. Sundramoorthy. This junior tournament was later picked up by FIFA to start a global wave of junior international competitions.

Sadly after his 2011 stroke, he became wheelchair-bound and was mainly confined to bed with a speech impediment. He prefered privacy in his condition and I visited him a number of times whenever close buddies like former AFC supremo Datuk Peter Velappan, from Kuala Lumpur, popped by.

And even in his meekest physical condition, there was no end to talking on balls, balls and balls. His head was full of goals-galore on how better Singapore football can be improved.

It’s time to salute Gani, with an immortal statue, as a “man with balls” (no pun intended), someone who will knock down any wall, take on the authorities to ensure football had its way, without fear or favour. But sometimes, hitting wrong political doors may be like scoring an own goal!

Yes, he dared to be different.

I recollect, rather embarrasingly, that he once even called me a “pain in the neck” when I was injured, after scoring with a diving header, in a celebrity match at the National Stadium in Kallang, in a match, in the late 1970s, where he was the chief guest, involving the Singapore media and former footballing greats.

I took the “pain” as a personal salute because critic-sports-writing was always my forte and I knew I had to accept the best of brickbats (and seldom, bouquets!) from Singapore’s legendary “Mr Football” because I always wrote, with my heart and head, during The New Nation, Singapore Monitor, The Straits Times and The New Paper era from the late 1970s.

He died at 82, just 12 months ago. I dare say, if he was three decades younger, he would be the perfect Asian candidate to be the FIFA President. Sepp Blatter or Giovanni “Gianni” Infantino (the current boss) would find it hard to come close to a Made-in-Singapore football-breathing gentleman, who used (mark my words) his own money to nurture the sport. Never ever a tone of corruption in anything Gani did.

Gani was awarded the Public Service Medal (PBM) during the 1978 National Day Awards. Now I sincerely hope the FAS (Football Association of Singapore) remember him forever in a right way, in a right place, at a right time, with an immortal statue to let the younger generation know that Singapore can produce sport-hearted icons of the same caliber as (the late founding father) Lee Kuan Yew.

There will never be another “Mr Kallang Roar” again.

But like Sir Stanley Matthews or Sir Matts Busby, history should enduringly remember Nadesan Ganesan, whose four fiery words must remain as a legendary motivation: Fire in the belly.

I revere with admiration Sir Stamford Raffles’ statue, located at Raffles’ Landing Site, on the Singapore River’s opposite bank. Why not one of a Singaporean football icon along the walkway to the “Home of Football” at Jalan Besar Stadium?