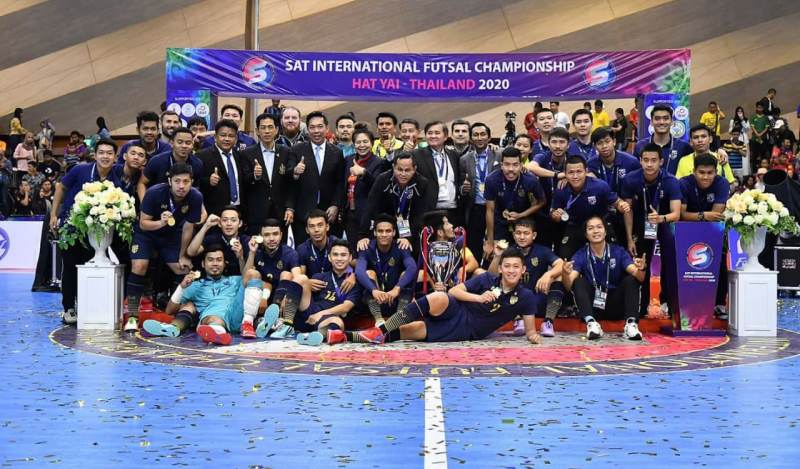 Suphawut Thueanklang’s late penalty clinched Thailand A the crown in the SAT International Futsal Championship 2020 when they beat Iran 2-1 in their final round robin tie.

The 2-1 victory gave Thailand A the perfect 12 points from four matches played saw them overcoming Tajikistan and also Malaysia.

It was always going to be very close between the two giants of Asian Futsal and it was Thailand who broke the deadlock early in the 14th minute through Muhammad Osamanmusa.

But Iran drew level just two minutes later off Salar Aghapour as the game then went up a gear for both teams to create their fair share of chances.

Just three minutes to the final whistle and Thailand A got a penalty that was converted by Suphawut.

In the meantime, Malaysia salvaged at least some measure of pride with a point from their last match with a 4-4 draw against Thailand B.

The Malaysians played it tight in the first half for the only goal of the game coming off Mohd Ridzwan Bakri in the 18th minute.

Just a minute into the second half and Thailand B drew level through Nopparuj Chuamordu.

Saiful Nizam Mohamad Ali then restored Malaysia’s advantage with the second goal on 28 minutes as Thailand B then scored three times in a three minute blitz through Nattasak Photi (33rd), Supakorn (34th) and Sarawut Phalaphruek (35th) to put the score at 4-2.

But the Malaysians came back Mohd Ridzwan (34th) and Abu Haniffa Hasan (39th).