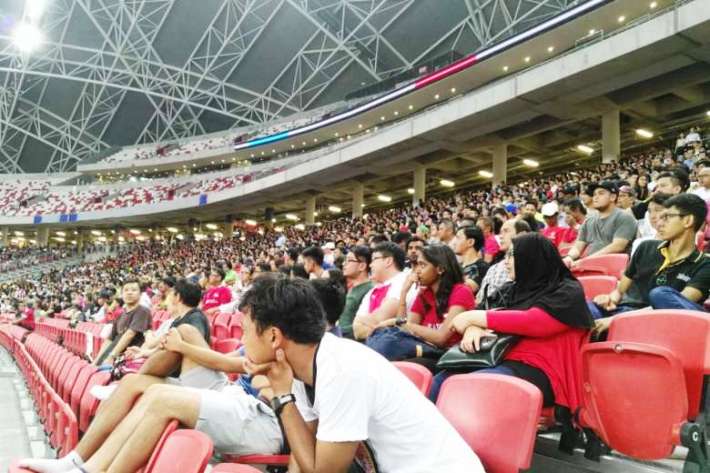 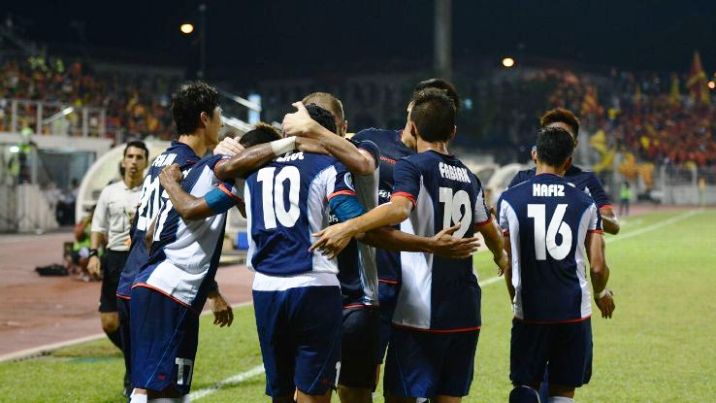 The first S-League club to play at the ultra-modern $1.33 billion SportsHub in Singapore got a special “roar” although uncomparable to the magically frightening “Kallang Roar” of the 1970s and 80s.

Tampines Rovers drew an eye-catching 11,875 fans for the AFC Cup tie against arch-rivals Selangor on Tuesday with a deserving 1-0 win that sent the Stags to the knock-out rounds of the Asian Football Confederation (AFC) Cup for the first time since 2011.

There was real electricity in the air as dads, mums and kids in tow came in their Made-in-Singapore footballing jerseys. That’s a very big “roar” by itself as the rallying call by the S-League appeared to work.

The Asian Football Confederation (AFC) confirms that it’s one of the highest attendances for AFC Cup, to date matched only by Johor’s 16,860 at Larkin Stadium for the Loa Toyota match on March 16 2016.

“Even the AFC Champions League clubs struggle for a 10,000 crowd, with big-name clubs from Australia, South Korea and Japan.  For Tampines Rovers to do this, at a time when the match was shown ‘live’ over television and on a mid-week date, it must come as a very big salute for Singapore football,” said a AFC spokesman.

The thump-thump beat at Kallang was also a special feather-in-the-cap for newly-minted Tampines Chairman Krishna Ramachandran, who like the late Nadesan Ganesan four decades ago in the mid-1970s, took the audacious gamble to fire up the “Kallang Roar”.

The ‘Kallang Roar’ was born after he decided in 1974 to switch Malaysia Cup home games from the 6,000-capacity Jalan Besar Stadium to the National Stadium – creating a 60,000-strong cauldron of noise!

I nostalgically remember Ganesan telling me how he took the “biggest gamble of my life” in switching matches from Jalan Besar Stadium to National Stadium, starting with a crowd of 15,000, then 35,000 and then the legendary “Kallang Roar” of 55,000 of more.

He said: “I believe we bonded Singapore through football and the ‘Kallang Roar’ was an unprecedented mantra to rally the Singaporeans. It was worth it, believe me, it was very satisfying for me. I have no regrets because I did my best as FAS chairman and made football the No. 1 sport.”

Krishna, the corporate lawyer who is hailed as a born-again Ganesan, gave the biggest thumbs-up: “Yes, the modern-day “Roar” can be revived. It is clearly still alive. It was such a quality crowd, the numbers were extremely credible for a Tuesday evening. For me it is very high on the barometer. It was well worth it, there was a hair-raising moment when the crowd started chanting, and the roar came up from one side of the stadium; then they started doing the Kallang Wave.”

Krishna’s aim is to galvanise football at a time footballing sentiments are at a low and he is confident that crowd numbers clearly illustrated that the move by the S.League club to hold a game at the 55,000-seater National Stadium was the daring and correct one.

“It was such a validation for my team as we have worked so hard to get things going against the odds,” he said. “Qualifying for the AFC Cup quarter-finals is a dream come true. Yes, definitely a step in the right direction.”

For the record, five-times S-League champions Tampines were the last side to play at the old National Stadium in the 2006 Singapore Cup final and became the first to do so at the new facility.

This brings me to the Kallang Roar, Singapore’s very own sporting celebration, which I’m very sentimental about. It is no exaggeration to say that the Kallang Roar of Singapore is akin to The Kop of Liverpool belting out their famous “You’ll Never Walk Alone” in support of their team.

Ask anyone who has experienced it before and it will no doubt bring back a great sense of nostalgia and of a nation’s togetherness.

The Lions of the 1970s and 1980s, from Samad Allapitchay, Arshad Khamis, Dollah Kassim, S. Rajagopal, Quah Kim Song, Fandi Ahmad and even V. Sundramoorthy (the current Tampines Rovers’ coach) have been privileged to be on the receiving end of the Kallang Roar, and it is safe to say that the intense competition witnessed at the Malaysian Cup brought out the loudest and most boisterous Kallang Roar, especially during the title-winning runs in 1977, 1980 and 1994.

Yes, the Kallang Roar became more of a whimper in later years, due to various economic, social and sporting factors. When the Lions left the Malaysian Cup, it created a huge void in terms of a lack of fortnightly affairs that could fill the stadium to the brim, as well as a common cause that Singapore would yell, scream, shout and literally pull their hair out for.

Tuesday’s 11,875 crowd has proved that all is not lost, and as I sat in the SportsHub, I recalled very clearly, with tingling goosebumps, that there’s more to come for the future generations. A very special moment that continues to give me hope of a return of a modern-day Kallang Roar, and, more significantly, what it represents – a united Singapore giving strength and motivation to fellow Singaporeans.

Yes, in many Singaporeans’ hearts, the Kallang Roar is still etched deep in memories and hearts, and symbolic of the Singapore soul.

Who says the “Kallang Roar” is gone?  Not by Tuesday’s evidence of 11,875. Be warned, as Krishna Ramachandra says in reviving a new-look Tampines Rovers that if ever anyone tramples on the Lions, there will be plenty of “Roars’.

The mythical creature, some say of the 1970s “Roar”, can be revived and more younger generation Singaporeans will now be convinced that it’s worth supporting the world’s No 1 sport, right at our door-steps of the new Kallang SportsHub.

Footnote: Roar or no roar, I must put on record that the green, green grass is not in order at Kallang. The pitch continues to be in poor condition. I sincerely hope SportsHub will make the necessary changes to improve and bring it up to par with the standards of a world-class football pitch.