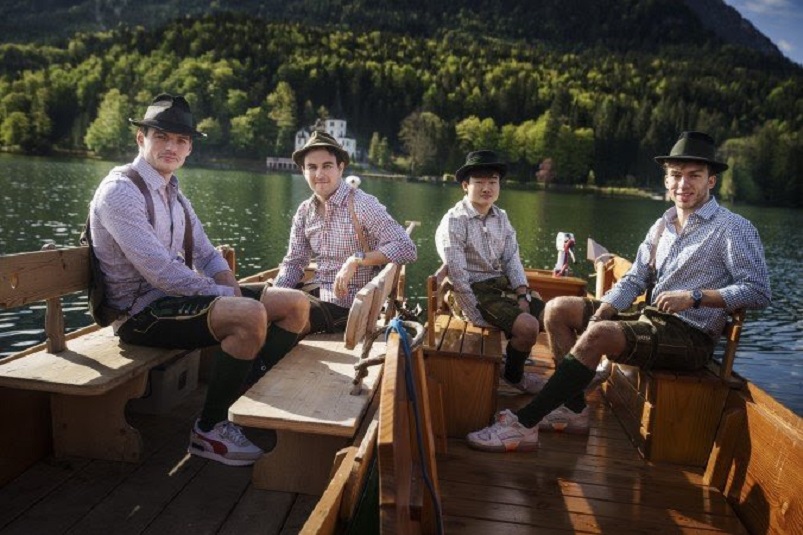 Take four Formula One drivers, two of the world’s most unlikely six-wheeled off-road machines, add in some Styrian countryside and a selection of uniquely Austrian challenges, you’ve got the recipe for the perfect build-up to Formula One’s double header at the Red Bull Ring.

In this most Austrian of adventures, Max Verstappen, Sergio Pérez, Pierre Gasly and Yuki Tsunoda first travelled to Red Bull’s state-of-the Hangar 7 facility in Salzburg where they jumped on board a Cessna 208 Caravan seaplane for the short 80km flight to Styria’s largest lake, Grundlsee. Kitting themselves out in lederhosen, the Bulls faced their first challenge, racing two of the lake’s traditional Plätte boats.

The race was to reach the key to the next challenge. And in this case the prize turned out to be actual keys, to a pair of enormous six-wheel Pinzgauer trucks.

Originally manufactured in Graz, Pinzgauers are six-wheel, all-terrain vehicles capable of taking on daunting landscapes, and the most treacherous of inclines and declines. The drivers were tested to make full use of the Pinzgauer’s capabilities as they went head-to-head through the forests of deepest Styria on their way to the Red Bull Ring. And once at the home of F1 in Austria and with a suitably damp track awaiting them, there was only one final challenge to face – an all or nothing sprint to the flag…

“Honestly I’d never seen anything like the Pinzgauer before – a six-wheel car. It was used in the army I think. I don’t know when but it pretty was cool to drive” said Max. “It’s always nice to race in Austria and now we get the opportunity to do it twice. It’s our home Grand Prix and we’ve won it before, so hopefully we can have two good weekends here.”

Sergio added: “It was very competitive, very serious (laughs) and the best type of Red Bull preparation you can have for the race weekend.”

Scuderia AlphaTauri’s Yuki Tsunoda said: “It was a really interesting and exciting event and there was plenty of teamwork. It was fun. The driving in the off-road with the Pinzgauer, we got stuck a lot on the hills and we had a tough time to get out from there, but it was fun.”

Pierre concluded: “We went around the Austrian countryside and discovered a lot of different parts of the country before we ended up at The Red Bull Ring. It was also good to be with all four drivers together.”