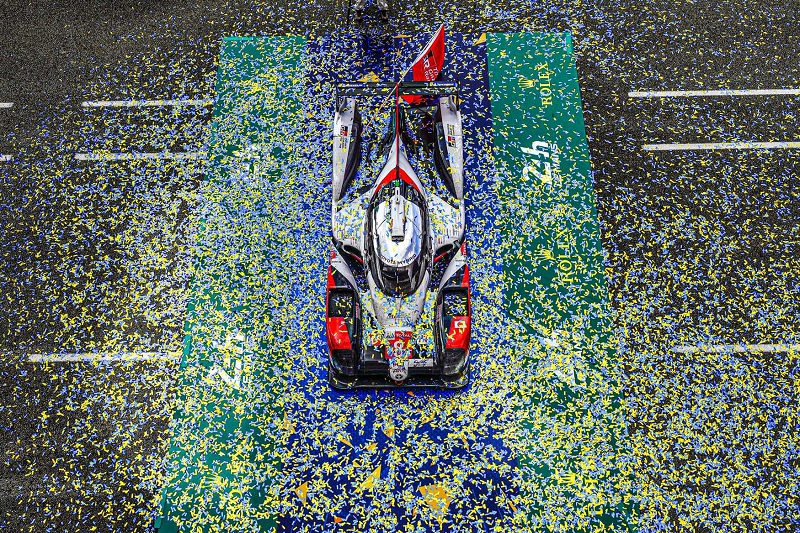 Toyota Gazoo Racing’s No. 8 TS050 HYBRID belonging to Sébastien Buemi, Kazuki Nakajima and Brendon Hartley has won the 2020 edition of the rescheduled 24 Hours of Le Mans, round 7 of FIA WEC Season 8.

It is the No. 8’s third victory of WEC Season 8 and Toyota’s third consecutive win at Le Mans. Toyota’s Le Mans triumph means the Japanese team have successfully won the FIA LMP1 World Endurance Championship with one round [Bahrain] still remaining.

This year’s Le Mans was staged behind closed doors and saw a total of 11 retirements (out of 59 starters) and four separate safety car sessions. Despite the threat of rainfall as darkness fell, the race remained dry throughout. The No.1 Rebellion R13 Gibson shared by Gustavo Menezes, Bruno Senna and Norman Nato came home in second place, five laps down on the winning Toyota which completed a total of 387 laps.

Rounding out the podium was the No. 7 Toyota TS050 HYBRID belonging to Jose-Maria Lopez, Mike Conway and Kamui Kobayashi, which started today’s race in pole position.  The trio led for the first 12 hours before the car spent 30 minutes in the pits getting the turbo replaced, dropping the team behind the sister No. 8 car.

Rebellion Racing’s second LMP1 entry finished fourth with Romain Dumas, Nathanaël Berthon and Louis Deletraz sharing driving duties in the No. 3 car which suffered intermittent clutch problems.  There was plenty of drama in the race’s closing hour when Deletraz hit the barriers at Indianapolis and had to come into the pits for a new front end.   The incident also saw the team penalised by a 30 second time penalty. The Swiss team managed to repair the car and Deletraz successfully drove the car to the finish.

Elsewhere, Austrian squad ByKolles Racing retired in the race’s eighth hour.  The No. 4 Enso CLM P1/01 was eight laps down due to an early alternator problem and encountered more problems when Bruno Spengler went off the track shortly after when the car lost its wing.

It marks the first ever WEC title for a British privateer team and saw the Anglo squad secure enough points to ensure it has won the prestigious title with one round still remaining. United Autosports eventually finished the race 32.831s ahead of runners-up JOTA (No. 38) who were hot on the tails of the No. 22 car but were knocked out of winning contention when Anthony Davidson was forced to bring the car back to the pits for a last minute splash-and-dash.

Last year’s Le Mans winners and overall category victors Signatech Alpine Elf finished third out of the WEC entrants (and fourth overall behind the No. 31 Panis Racing entry).  Signatech’s trio of drivers André Negrão, Pierre Ragues and Thomas Laurent did a superb job of fighting back after the No. 36 car spent significant time in the pits early in the race with water pressure problems.

Fourth out of the full-time WEC entrants (and seventh overall) was the Cool Racing entry shared by Nicolas Lapierre, Antonin Borga and Alexandre Coigny.  The Swiss-based squad had a relatively trouble-free race with the only real issue for the No. 42 car being a left rear puncture.

Italian team Cetilar Racing finished fifth out of the WEC entrants – and 10th in class – with the trio putting in a strong performance throughout the 24 hours including a closely-fought battle with the all-female line-up in the No. 50 Richard Mille Racing Team entry who eventually finished one spot ahead.

Elsewhere, the No. 29 Racing Team Nederland had a difficult race eventually finishing sixth in the WEC LMP2 class (and 15th overall). Early in the race, the Dutch squad had difficulties with the car’s engine overheating. An impact with a LMGTE Pro car also left to problems with the car’s balance and later in the race the car lost significant time in the pitlane with a fractured oil pipe.

The No. 33 High Class Racing entry retired a few hours into the race due to ongoing problems with the car’s gearbox.
Throughout the entire race, the 24-field category provided plenty of action including a disqualification for early class leaders, No. 37 Jackie Chan DC Racing.

The car was black flagged after the marshals declared the team had received outside assistance when the ORECA stopped out on track with Gabriel Aubry at the wheel.

The results remain provisional until scrutineering has taken place tomorrow (Monday 21 September) and can be found HERE.  The final round of the 2020 FIA World Endurance Championship, the 8 Hours of Bahrain, will take place on 14 November. – www.fiawec.com