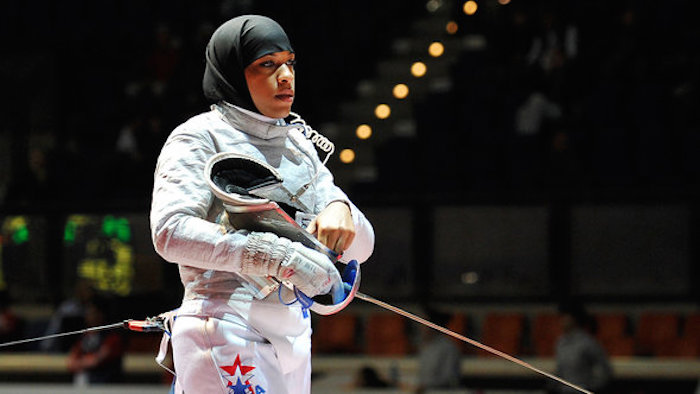 Ibtihaj Muhammad hopes her history-making appearance at the Rio de Janeiro Olympics will help change attitudes towards Muslims in the United States when she becomes the first American athlete to compete wearing a hijab.

The talented 30-year-old African-American saber fencer has already guaranteed her spot on the US Olympic team after earning enough points at the World Cup in Greece in January to qualify.

Muhammad’s qualification comes against an ugly backrop of anti-Islamic rhetoric in the United States, with Republican presidential contender Donald Trump vowing in December to bar all Muslims from entering the country if elected. For Muhammad, the bigotry is nothing new.

She has been confronted with discrimination ever since childhood, when her skin color and hijab would often provoke lingering stares or abuse.

Muhammad hopes that her participation in the Olympics may play a small role in shifting those kinds of attitudes.

“It’s a tough political environment that we’re in right now, it’s not easy,” Muhammad told reporters on Wednesday at the US Olympic team media summit.

“Muslims are under the microscope and I’m hoping to change the image that people may have of Muslim women.

“I know that Muslim women are very, very diverse, especially here in the United States. We come in all different shapes, colors and sizes and we come from different backgrounds and are productive members of society. I want people to see that.”

Muhammad would not be drawn on what life for Muslims in the United States might look like if Trump is elected to the White House in November.

“I hate to talk about what ifs,” she said. “I’m hoping we can change direction a little bit and see Muslims in more of a positive light and try to combat the negative imagery that we are shown every day. Can I influence the debate? I don’t know. I’m just trying to do well in Rio.”

The toxic climate has brought practical concerns. After several stories involving Muslims being barred from boarding planes, Muhammad revealed she had harbored fears of of suffering a similar fate during qualifiers for Rio.

The fact that she is expected to speak about weighty issues relating to her race, religion and gender — rather than merely her sport — does sometimes take its toll, Muhammad acknowledged.

“It’s something I struggle with every day. But ultimately I feel incredibly blessed to have been given this platform. And when I think of my predecessors and people who have spoken out against bigotry and hate, I feel like I owe it not just to myself but to my community to try to fight it,” she said.

“I remember being a kid and people telling me I didn’t belong in my sport because of my skin color, because I was Muslim. So if I can be a source of change for other minorities I feel fortunate to be able to do that.”

Muhammad’s athletic achievements have given her a national profile. She recently met President Barack Obama during his first visit to a US mosque, with the US leader joking he expected her to bring back a gold medal. Obama’s endorsement did not leave Muhammad feeling under additional pressure to deliver in Rio.

“I feel so fulfilled and blessed to be in this position to represent Team USA.” – Agence France-Presse