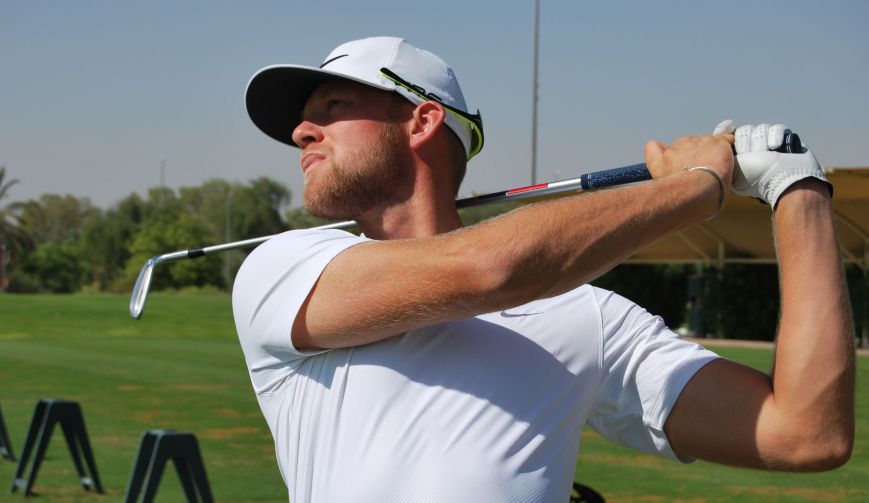 Newly-crowned MENA Golf Tour champion, Joshua White of England, will lead an impressive array of talent at the inaugural Dubai Open which will get underway at The Els Club Dubai from December 18-21.

White has been impressive on the MENA Golf Tour this season, having won the Order of Merit title over compatriot Luke Joy, who settled for second, while another Englishman Zane Scotland sits in third place.

The talented trio will headline the MENA Golf Tour contingent as they play against the elite field from Asian Tour and vie for the Official World Ranking Points (OWGR) points on offer in what is the Asian Tour’s final event of 2014.

The distinct presence of the MENA Golf Tour players in the DUBAi Open, promoted and organised by golf in DUBAi, is a reflection on the growing relationship between the Asian Tour and MENA Golf Tour.

A total of 24 MENA Golf Tour players qualified for Dubai’s newest tour event, including many of the region’s home players such as Morrocans Ahmed Marjane, Faycal Serghini and Younes El Hassani, as well as Peter Badawy of Lebanon.

Marjane, who became the first Arab golfer to win a MENA Golf Tour event when he won the 2014 Ras Al Khaimah Classic, is genuinely excited at the prospect of playing in his second Asian Tour event.

“I have heard a lot about the Asian Tour, which has produced so many world class players over the years. A good showing in the DUBAi Open will certainly be a good advertisement for not only for the MENA Golf Tour, but also for the Arab golf in general.

“We can’t wait to get started. Opportunities like this one don’t come along too often, but we are confident that we can be as competitive as anyone in the field,” said the 22-year-old from Rabat, who finished seventh on the 2014 MENA Golf Tour Order of Merit, one place behind fellow Moroccan, Serghini.

Mohamed Juma Buamaim, chairman of the MENA Golf Tour, said: “Golf’s future lies in Asia. The rising popularity of the sport in China and India, in particular, has led to the creation of many new courses and a perceptible upsurge in in-bound golf tourism

“The golf market in Asia is huge and everyone wants to be involved. We are excited to be hosting the Dubai Open and thank the Asian Tour for extending this fantastic opportunity to the MENA Golf Tour. Their recognition of our efforts to grow golf in our region is much appreciated,” he said.

Meanwhile, James Yeomans of England and Scotland’s Daniel Kay, who finished third and fourth respectively, on the 2014 Order of Merit for Amateurs have turned professionals and will make their debut in the paid ranks at the Dubai Open.

The MENA Golf Tour contingent for the 2014 Dubai Open: