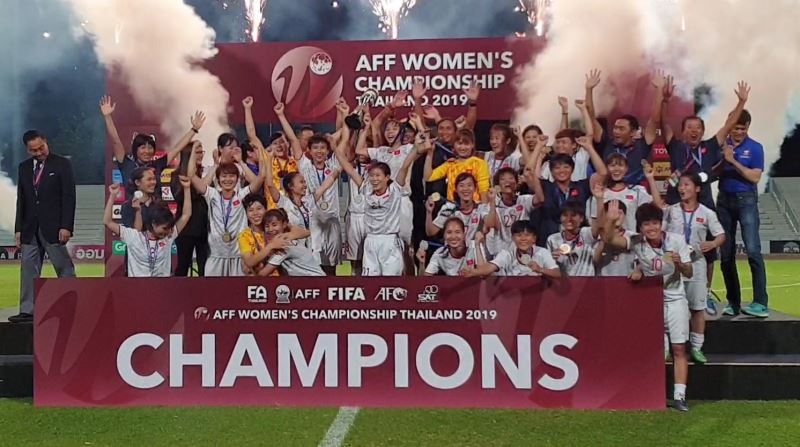 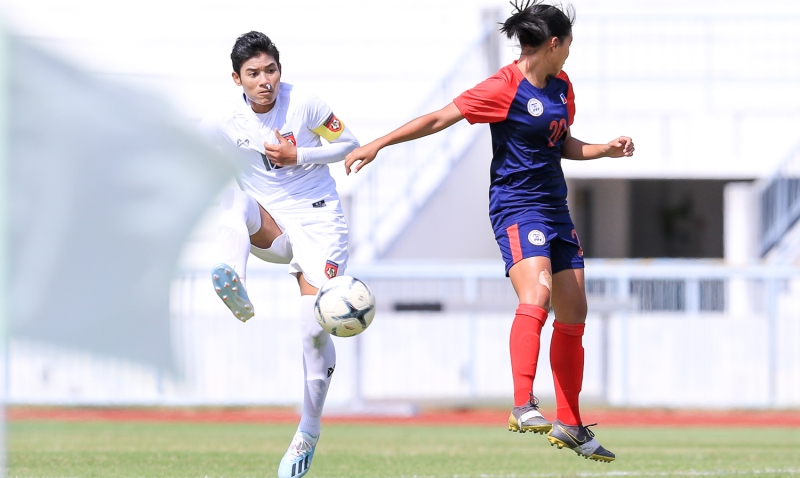 Vietnam captain Huynh Nhu delivered Vietnam their third title of the AFF Women’s Championship 2019 when they beat hosts Thailand 1-0 in extra time in the final that was played here tonight at the  Institute of Physical Education (IPE).

The victory today followed earlier titles they won in 2006 and also 2012.

“It was an exceptionally difficult game. Thailand played really well and we had to be careful not to make mistakes,” said Vietnam head coach Mai Duc Chung. “And when they goal finally came in extra time, we had to defended well and hard.”

In front of close to 2,0000 fans including AFF President Major General Khiev Sameth and members of the AFF Council, the team went on famously with both teams exchanging blows for blows.

Neither teams were giving up much with Thailand pushing up in numbers while Vietnam were looking for space for the counter attack.

The lanky Nildhamrong Suchawadee was switching from flank to flank as she was given a free role to hassle the Vietnam backline. In the 23rd minute, Nildhamrong broke free but was close down by two recovering defenders.

Thailand then missed two more great chances through Thongsombut Rattikan and then Saomsai Pitsamai before Vietnam have their first real crack with Huynh Nhu’s low shot.

The second half continued to be a string of near-misses for both teams as Vietnam were not risking too much while they continued to frustrate Thailand by keeping it close at the back.

With the game into extra time, a momentary lapse in the Thai backline in the 95th minute allowed Huynh Nhu to pick up the playback from Nguyen Thi Van before unleashing a crisp low shot past keeper Sengyong Yada for the lead.

That goal rattled Thailand as they desperately went in search of the equalizer to force the match into extra time.

But despite playing with ten women – after goalscorer Huynh Nhu was ejected from the match for picking up her second yellow card for taking off her shirt to celebrate her goal – the Vietnam defence was just too determined as they stuck to their guns all the way to the finish.

In the meantime, a fabulous opening goal from top striker Yee Yee Oo led Myanmar to the third spot of the AFF Women’s Championship when they sidestepped the Philippines 3-0 in the classification match.

The one goal today should see the 29-year-old forward cement her place as the top striker at this year’s championship with eight goals – provided that nearest challenger Pham Hai Yen from Vietnam do not score at least three goals in their final against Vietnam later this evening.

“The heat was intense in the first half, so the players had to play it smart and not risk too much,” said Myanmar head coach Win Thu Moe. “In the second half, they stick to the plan which has been set and that allowed us to get behind the defenders with more ease.”

Coupled with the extreme heat and the competitive nature of both teams, chances were few in the first half as both teams were just looking for the opening mistakes to capitalize on.

It was not until the second half that the match came alive where in the 63rd minute, Yee Oo pounced on a loose clearance for a placing shot to beat Philippines keeper Inna Palacios for the first time on the night.

And two minutes later, Myanmar doubled their advantage with substitute Nu Nu punishing a miscommunication between Palacios and Hali Long to score.

Myanmar then made sure of their third-placed finish with Nu Nu again finding the target from close.