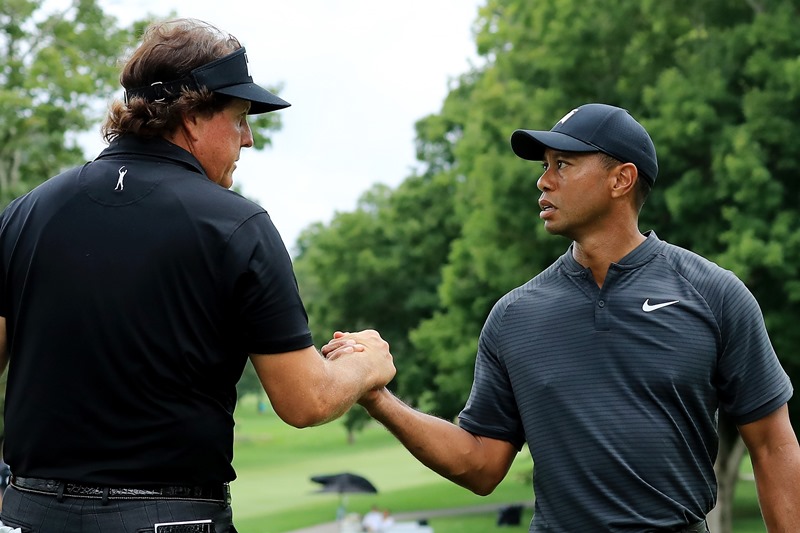 Tiger Woods and Phil Mickelson have shared the PGA TOUR stage for nearly a quarter of a century, and to say they are the two biggest stars of their generation is an understatement.

The memories will be added to this Sunday, May 24, at Medalist Golf Club, where Woods and Mickelson will be two of the stars in a COVID-19 fundraising tournament alongside a pair of other athletes who know something about sharing their sport’s spotlight – National Football League (NFL) icons Tom Brady and Peyton Manning.  Capital One’s The Match: Champions for Charity features the two teams playing a four-ball (best-ball) format on the front nine and a modified alternate-shot format on the back.

They have finished 1-2 in Tour events nine times over the course of their sterling careers, beginning at the 1998 Sentry Tournament of Champions, where Mickelson held off a furious Sunday rally from Woods to win. The pair finished 1-2 in an event in five consecutive years and last accomplished the feat at the 2009 Tour Championship. Mickelson got the better of Woods that time, too, as he shot a bogey-free 65 on the final day to win by three shots.

The best of those epic matchups? That honour likely falls to the 2005 Ford Championship at Doral in Miami, where Woods clipped Mickelson by one shot. “It was electric,” said Woods, who went out in 33 strokes to shave a shot off his deficit as Mickelson turned in 34.

Woods making birdie at No. 10 to tie was riveting, but when he reached the green at the 605-yard 12th and made a 27-foot eagle putt to go two in front, the ground shook. Mickelson, however, wasn’t shaken. The reigning Masters champion was in the midst of arguably his greatest stretch of play and would go on to win the PGA Championship five months later. “I loved it,” said Lefty, “because I want a chance to compete against him at his best.”

Mickelson proceeded to birdie the demanding par-3 13th and beguiling par-4 14th to pull even. “That shows you what kind of competitor Phil is,” said Woods. The deciding blow came at the par-4 17th, Woods’ birdie helping him shoot 66 to overtake Mickelson (69).

Mickelson often had a knack for beating Woods at his best. The most memorable of those wins was the 2000 Farmers Invitational at Torrey Pines, where Woods was going for an unprecedented seventh consecutive Tour victory. But Mickelson, approaching his 30th birthday and nearly two years removed from his last win, stood tall with four birdies over his final six holes to stave off his rival.

Here is a look at all nine times that the pair have finished first and second in a Tour event.

1998 Sentry Tournament of Champions, LaCosta CC, Carlsbad, California: Mickelson, five ahead of Woods to start the final day, hung on to win, at 17-under, but not before a 22-year-old Woods dazzled the crowd with a closing 64 to nearly steal the show.

1999 WGC-Bridgestone Invitational, Firestone CC, Akron, Ohio: Woods was a whopping seven ahead of Mickelson to start the final round, but with five birdies in his first 10 holes, Lefty got into the mix. A bogey at 16 by Mickelson slowed his charge, however, and Woods threw down a clutch birdie at 17 to give him a one-shot win.

2000 TOUR Championship, East Lake CC, Atlanta, Georgia: Mickelson started the final round one behind Woods, the co-leader with Vijay Singh, but puts up 4-under 66 to rally for a two-stroke victory. Woods shot 69 and was denied a 10th win that season.

2001 Arnold Palmer Invitational, Bay Hill Club & Lodge, Orlando, Florida: Four behind Woods to start the final round, Mickelson charged home in 66 and was tied for the lead when he finished. But Woods birdied the final hole, shot 69, and won by one.

2002 U.S. Open, Bethpage State Park (Black), Farmingdale, New York: The only time they’ve finished 1-2 in a major, this was vintage Woods relentlessly holding on despite not having his best stuff. Woods began the final round five shots ahead of Mickelson, bogeyed each of his first two holes, and two of his last three, but shot 72 and held on to win by three.

2005 Ford Championship at Doral, Doral Resort and Lodge, Miami, Florida: The only time in their careers that Woods and Mickelson have been in the final pairing in a final round and finished 1-2. Woods closed with a 66 to overtake Mickelson, who shot 69. It was arguably their greatest head-to-head battle.

2007 Deutsche Bank Championship, TPC Boston, Norton, Massachusetts: Paired in the penultimate group on the final day, Mickelson was two off the lead, Woods three, and all eyes were on them. Mickelson fired a 66 to win the tournament, Woods setting for a 67 to tie for second.

MEET THE OTHER GUYS IN TIGER AND PHIL’S CHARITY MATCH

The global stardom of Tiger Woods and Phil Mickelson stretch far beyond the American audience they most often play in front of. With a combined 126 PGA Tour victories, including 20 major championships, the fame and achievements of these longtime rivals translate the world over.

The same cannot necessarily be said of Tom Brady and Peyton Manning, the PGA Tour pros’ playing partners in Sunday’s charity event, Capital One’s The Match: Champions for Charity. Though their high-profile stature as National Football League quarterbacks may make them superstars in the United States, their exploits are not quite as well known on an international scale, given the distinctive American popularity of their sport.

“It’s really a unique moment in time, and the ability to do good and help others is at the core of what this is all about,” Brady said. “To get an opportunity to go play golf with three of the guys I’ve always looked up to in sports is something I couldn’t turn down.”

So, who exactly are Brady and Manning, and why are they playing in Sunday’s event? The simplest answer is the parallel between their own longtime rivalry—and massive success—and that of Woods and Mickelson. In their sport, these icons are considered only two of their generation’s best players but two of the greatest players all-time.

“I think Tiger is the greatest golfer that’s ever played, and I think these two are the best at what they do,” Mickelson said of Brady and Manning. “They grew up playing football, not golf, but they’re going out of their comfort zone on national TV to showcase their golf game. That’s not an easy thing to do. For them to do that and create a fun, entertaining environment that’s helping others, I have a lot of respect for it.”

Brady and Manning have been compared against one another throughout their careers, not unlike their golf counterparts. They have combined to win eight NFL Most Valuable Player Awards—Manning won five, Brady currently has three—and perhaps more importantly, eight Super Bowl Championships, the sport’s biggest and most-coveted trophy.

Manning retired in 2015 after playing 17 years with the Indianapolis Colts and Denver Broncos, winning a Super Bowl with each team. Brady, meanwhile, is entering his 21st year in the NFL, but the 2020 season will be his first with the Tampa Bay Buccaneers after spending the first two decades of his career with the New England Patriots, where he played in nine Super Bowls, winning six.

Head to head, the two players competed against one another 17 times with, Brady emerging on top in 11 of those games. They matched up five times in the playoffs, with Brady winning three of them.

“I don’t think anybody wants to see Tom and I hit golf balls as much as they want to see these two Hall of Famers play golf,” Manning said. “I’m glad as a sports fan to see golf return. I enjoy watching those guys compete. For Tom and me to go [inside] the ropes and watch how Tiger and Phil do their thing, and be part of it and raise money, we’re glad to do it. And if it helps people along the way take their minds off of things, that’s even better.”