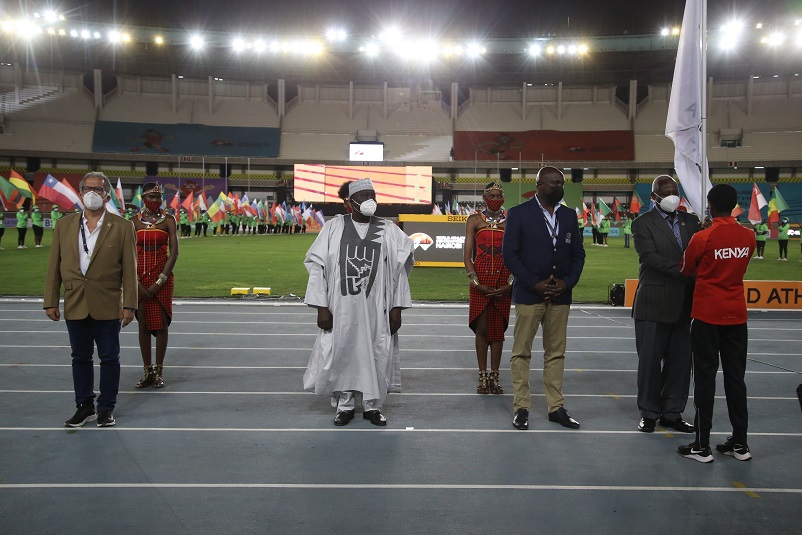 The championships ended with a flourish on Sunday (22) as the Jamaican women and the South African men broke world U20 records in the 4x100m relays, adding to the two world U20 records set by France’s Sasha Zhoya in the men’s 110m hurdles.

From more than 100 countries that competed in Nairobi, 18 teams won gold medals, 35 won medals and 63 had top eight finishes.

Kenya, Finland, Nigeria and Botswana were among the countries that had their best ever world U20 championships. Namibia and Israel won their first gold medals and Cyprus won its first medal.

World Athletics President Sebastian Coe hailed the athletes, teams and organisers for their dedication and determination to make this a successful event despite the logistical challenges created by the Covid-19 pandemic.

The championships were broadcast to more than 70 countries around the world and every other country had access to a livestream on World Athletics’ YouTube channel.

“These championships have not just taken place, they have been highly successful,” Coe said. “We have all been so impressed with the range and depth of talent we have seen from these young athletes.

“The last World U20 championships (in Tampere in 2018) featured names like Armand Duplantis, Jakob Ingebrigtsen  and Peruth Chemutai among others, all Olympic champions just three years later. So it’s reasonable to think we’ve seen some of the Paris 2024 champions-to-be In Nairobi.

“The next four years offers unprecedented opportunities for these future champions to move on to the senior World Championships and Olympic stages. I’m really looking forward to seeing many of these young champions rising through the senior ranks.”

Many of the younger athletes who have featured in Nairobi will also have the chance to compete at the next World Athletics U20 Championships, being held in Cali, Colombia, next year.

The flag was passed from Nairobi to Cali at tonight’s closing ceremony in Kasarani Stadium.

The World Athletics U20 Championships in numbers:

18 countries won gold medals (9 from Europe, 6 from Africa, 3 from the Americas)

Israel and Namibia have their first ever world U20 champions (Yonathan Kapitolnik in the men’s high jump and Christine Mboma in the women’s 200m).

Over 5000 LAMP tests were conducted.

Over 4000 PCR tests were conducted.

Around 10,000 antigen tests were conducted for LOC staff and volunteers, who were tested every day.

The Championships have been broadcast in more than 70 countries.

In Kenya, the local free-to-air broadcaster NTV has had around 1 million viewers tune in to the Championships each day.