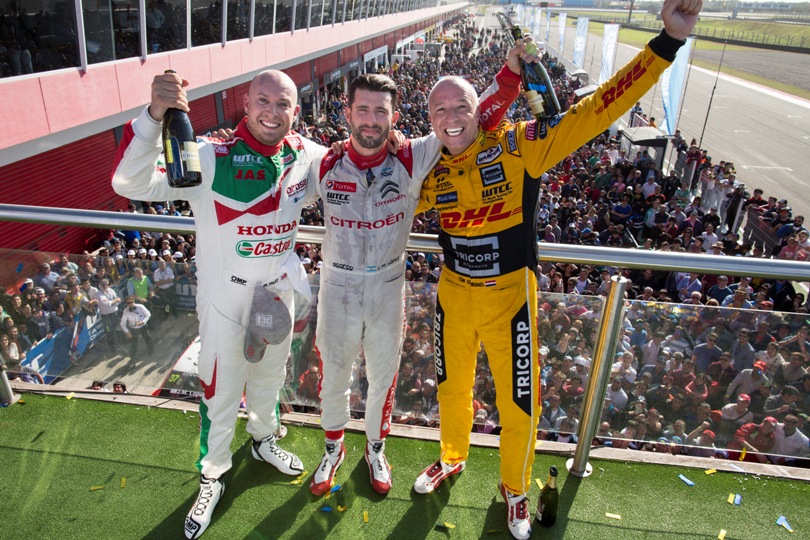 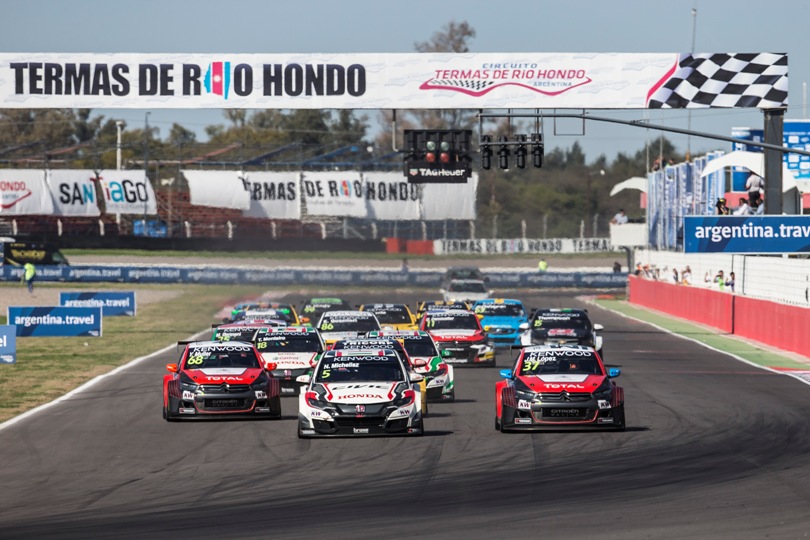 El Maestro scored 27 wins in world championship events during his distinguished career: first place for Citroën driver López in the Main Race in the Termas de Río Hondo sunshine this afternoon, was victory number 28 for the Argentine, who now tops the WTCC standings by 117 points heading to Japan next month.

“Comparisons are always a bit difficult,” said López. “He’s the greatest we ever had and everything we have in motor racing is because of him but it’s a nice personal thing.”

Despite the high of claiming the DHL Pole Position, there was drama for López when the engine in his C-Elysée had to be replaced overnight, resulting in demotion to the back of the grid for the Opening Race. Undeterred, López charged through to finish fifth with Tom Chilton beating Rob Huff and Yvan Muller to victory.

Starting from pole, López trailed the fast-starting Norbert Michelisz in the Main Race before making his move for the lead on lap seven. Michelisz dropped further back following contact with Muller, leaving Tom Coronel and Huff to complete the podium.

OPENING RACE REPORT: CHILTON WINS FOR SÉBASTIEN LOEB’S TEAM
Tom Chilton scored his first outright win for Sébastien Loeb Racing in the Opening Race at WTCC Race of Argentina, as José María López delighted the crowd with a charging drive to fifth from P18 on the grid. Both Chilton and Honda driver Tiago Monteiro made great starts from second and third on the grid, allowing them to pass DHL pole-sitter John Filippi on the run down to Turn 1. Chilton and Monteiro then banged door handles a few corners later, and Monteiro put a wheel on the grass heading onto the long back straight. Filippi regained second, while others were four-wide behind him into Turn 5.

Chilton was able to open up a lead of more than two seconds, giving him a useful margin once Rob Huff had found a way past Filippi on lap seven. With pressure from Yvan Muller behind him, Huff was able to cut the gap to Chilton, but Chilton held on to win by 0.792 seconds, also taking WTCC Trophy honours for the fourth time in 2016. While Muller completed the podium and Monteiro finished fourth, López came through to fifth after a penalty for an engine change on his Citroën relegated him to the back of the grid. Once relegated by Monteiro, Filippi initially held onto fifth after contact with Mehdi Bennani caused the Corsican to drop behind Tom Coronel, Norbert Michelisz and López.

López was then able to pass the trio ahead of him in consecutive laps to get fifth, and Filippi was quickly shuffled back to P10. Michelisz followed López past Coronel to claim sixth, with Bennani eighth and James Thompson ninth. After starring during practice and qualifying, Esteban Guerrieri had a difficult first WTCC race, falling down the order in the opening stages due to a faulty clutch before pitting with a broken upright on his Campos Chevrolet, the result of contact with Monteiro.

MAIN RACE REPORT: LÓPEZ LANDS HOME VICTORY NUMBER FIVE
José María López claimed a fifth home victory in the Main Race at WTCC Race of Argentina, battling his way past early leader Norbert Michelisz. With a good start from second on the grid, Michelisz challenged López at Turn 1 and was able to make the lead his through the following corners. Yvan Muller also got a good run on López, who just held on to second into Turn 5.

A lap later, the Frenchman capitalised on the fight in front to briefly get ahead of his team-mate López. Michelisz was able to defend from López at Turn 5 for several laps, but it was Muller’s involvement that gave the local hero the chance to grab the lead on lap seven. Muller got inside López at Turn 7 and forced Michelisz to defend from him into Turn 9. That left the inside line open for López to claim top spot.

Muller and Michelisz immediately ran wide off track at Turn 11 following contact and dropped down the order, promoting Tom Coronel up into second. The Dutchman tried hard to chase López, but the reigning champion was able to take a popular victory by two seconds. Coronel finished second for the WTCC Trophy win. Rob Huff scored his second podium of the day in third for Honda, ahead of his team-mate Tiago Monteiro.

Muller claimed fifth ahead of debutant Esteban Guerrieri, who recovered from a bad start to take a fine sixth and outlined his hopes of a full-time drive in the WTCC next season following a strong debut on home soil. Mehdi Bennani, Norbert Michelisz, Tom Chilton and John Filippi completed the top 10 as López bagged the TAG Heuer Best Lap Trophy for his blistering effort of 1m45.899s, which breaks his own lap record.

HIGH TIMES FOR HONDA WITH ARGENTINA WTCC MAC3 WIN
Honda has won the FIA World Touring Car Championship’s Manufacturers Against the Clock (WTCC MAC3) Tour de France-inspired team time trial for the fifth occasion in 2016 with victory ahead of Citroën and LADA. Over two laps of the Termas de Río Hondo circuit from a standing start, Norbert Michelisz, Rob Huff and Tiago Monteiro set a time of 3m32.872s which Citroën would prove unable to beat.

In a formation headed by home hero José María López, the French make was faster than Honda by one tenth of a second after one lap. However, Tom Chilton and Yvan Muller were then unable to keep up with López around the second tour, and Muller was clocked across the line 0.677s slower than Honda’s benchmark effort. After a difficult qualifying session, LADA struggled again for pace in WTCC MAC3 and finished up 3.308 seconds off the pace in third with Nicky Catsburg, Gabriele Tarquini and Hugo Valente.

“We’re satisfied because we’ve beaten Citroën with a good performance by all our drivers,” said Honda team boss Alessandro Mariani. “Since the beginning of the season we’ve had good pace and now we’re working on the smaller details.” Honda earned 10 WTCC Manufacturers’ championship points, Citroën eight and LADA six.

RACE WINNER QUOTES (full transcript available soon athttp://media.fiawtcc.com)
Tom Chilton (Opening Race winner): “It’s absolutely fantastic, my first win of the year. It was definitely not easy out there because it’s a circuit where it’s very easy to make a mistake and it’s also very hard on the tyres. I worked very hard with the team this weekend and Sébastien Loeb Racing has done a fantastic. The Citroëns had a strong race pace and I had a good fight with my rivals. They were closing on me and I was worried it would come down to the line so I’m absolutely over the moon. After a few seconds and thirds this year it’s great to get this first win.”

José María López (Main Race winner): “Of course I knew I had a good chance in the second race but already Norbert did a better start than me, which I knew would be possible here. He moved very well and did a fantastic defensive manoeuvre in Turn 2. I have to say thank you to the team and especially to Yvan who allowed me to have a go at Michelisz without disturbing me. Without that it would have been very difficult. When we went side-to-side for Turn 9 something happened because he defended from Yvan and let the inside clear for me. It’s very important to win here in my country. I didn’t expect to be able to pull out points with the engine problem we had. I’m a very lucky guy and thank you to everyone who has been here pushing for me.”