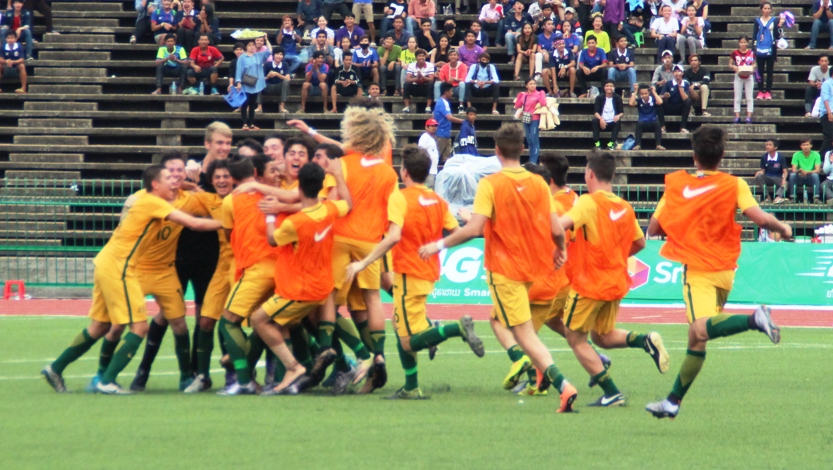 Substitute James Fletcher puts Australia in the final of the AFF Smart Under-16 Championship 2016 when his final penalty conversion gave them a hard fought 5-3 win over a resilient Thailand in the semi-final tie this afternoon at the National Olympic Stadium.

The score at the end of regulation was 3-3.

“We did not play well in the first half but we recovered in the second,” said Australian head coach Antony Vidmar afterwards. “The boys showed a lot of character today and now we are looking forward to the final.”

The score at the end of pulsating first half was 1-1n with Louis D’Arrigo’s 29th minute grounder being erased by a quick counter from Thailand in the 45th minute which resulted in a fine finish from Peerapat Kaminthong.

Just two minutes into the second half, Peerapat doubled the advantage with a lob from 25metres out.

The game went up a gear soon after that as Australia missed a golden chance in the 52nd minute when Jacob Italiano muffed a one-on-one
opportunity.

But five minutes later it was all square again when John Roberts scored from close range.

Several substitutions later failed to change the pace of the game as Thailand then wrested the chance to go forward again in the 62nd minute with Korawich Tasa punishing a defensive error to beat Australian keeper Griffiths for the third time.

As Thailand pulled back all their men into their own half, Australia pushed harder the equaliser and deep into injury time they finally clinched it when Roberts again was on hand to head home the freekick and force the game into penalties.

In the penalty shootout, Australia converted all their goals through Roberts, Lachlan Brook, Joel King, Dylan Pierias and Fletcher.

“We tried very hard for this game but at least, we did not lose to Australia in regular time,” said Thai coach Chaiyong Khumpiam.” We made some mistake in a game which we should have won.”