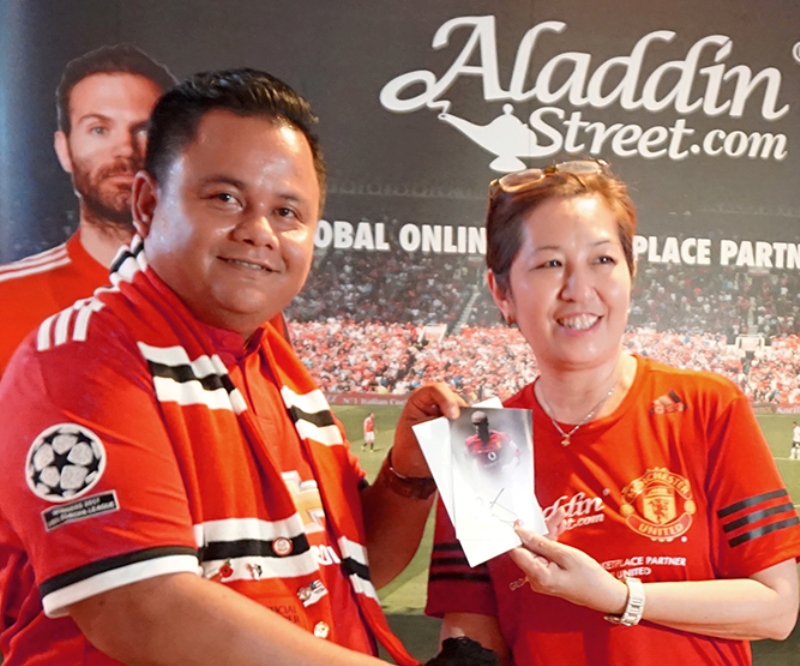 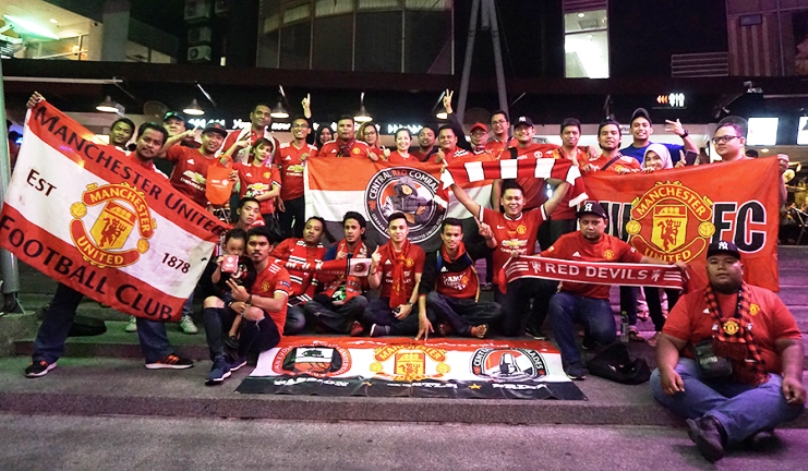 It was Game On at AladdinStreet’s first viewing party of the live match telecast of Manchester United vs Tottenham Hotspurs, held at Piccadilly, Millenium Square on Saturday, 28 Oct 2017.

More than 500 invited guests and Fan Clubs as well as AladdinStreet’s contests winners cheered on Manchester United to a 1-0 win.

In conjunction with the event and prior to the game’s official kick off time at 7:30pm, AladdinStreet rolled out some interesting games, quizzes and lucky draws at 6:30pm and during half-time; offering all in attendance the opportunity to win some awesome prizes and goodies.

The objective of the gathering was for AladdinStreet, the Global online marketplace partner of Manchester United to strengthen relationship with its Merchants and Manchester United fan club members by promoting the sporting and team spirit on and off the pitch.

Dato Seri Vincent Tiew, Senior Vice-President of AladdinStreet presented the contest prizes to Edmund Ng who won the highest shopper on AladdinStreet.com.my “Taiwan Halal Festival – Shop & Win”, which ran from 01 August till 30 September 2017 and Encik Mohd Zufino Mohd Zulkafli, who won the social media contest “Count the AladdinStreet digital board logo” with their winning Manchester United Legend-Signed Jersey; authenticated with an accompanying picture of the two legends signing on the said jerseys.

AladdinStreet prides itself as the Global partner of Manchester United FC and as the World’s first exclusive premium quality products and halalan toyyiban focused Global e-marketplace. All halalan toyyiban products offered at AladdinStreet’s worldwide platforms are subjected to strict screening by its Business and Halal Integrity tasks force; offering consumers the convenience of shopping 24/7 with the comfort and peace-of-mind from the convenience of their personal computers and mobile devices.

AladdinStreet’s Senior Vice-President, Dato Seri Vincent Tiew comments: “Our partnership with Manchester United FC is a true reflection of our commitment to our global ambitions. Like United, the flag bearer of English football globally, AladdinStreet will be the flag bearer for the global halal industry. Our exclusive global partnership with Manchester United FC, the world’s biggest, successful and famous English football club will provide the impetus for AladdinStreet and its merchants to penetrate the global halal marketplace.

It also provides the platform to create and host unique experiences for its customers and clients such as Match Viewing parties and other upcoming activities.

While discerning online consumers worldwide will be able to enjoy unique opportunities as well as experience unique benefits and privileges when they shop at AladdinStreet, SME’s and manufacturers of premium quality products in Malaysia have the opportunity to leverage on AladdinStreet’s global platform and engage on cross border trade as well as benefit from the tremendous brand awareness of Manchester United FC.

AladdinStreet’s International joint-venture offices will be available in 30 countries worldwide; covering a footprint of almost 4 billion consumers. Currently, AladdinStreet e-Marketplace is available in Malaysia, Singapore, China and Kazakhstan and with offices opened in Indonesia, Pakistan and United Kingdom.