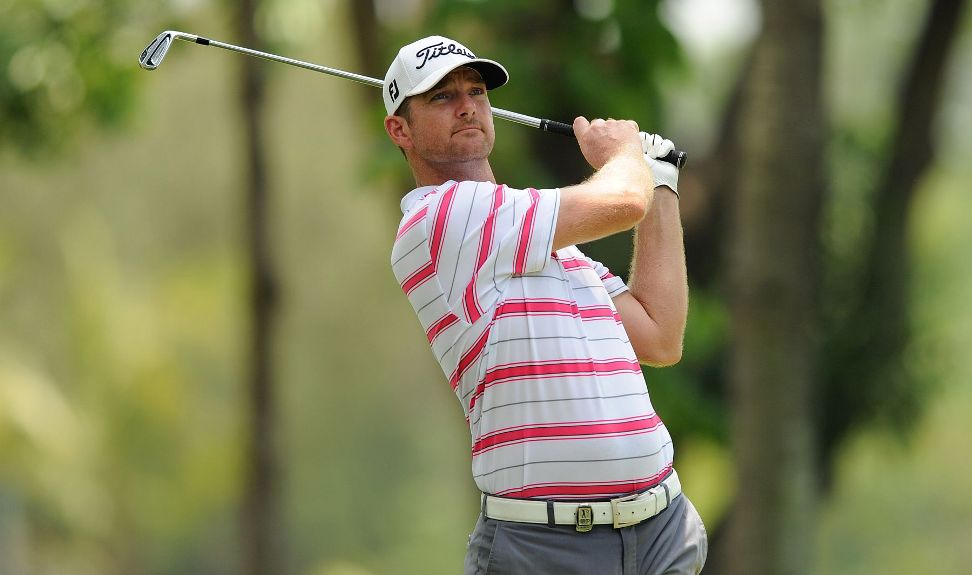 Marcus Both of Australia rediscovered some of his old magic when he charged into the halfway lead with a flawless six-under-par 66 at the ICTSI Philippine Open on Friday.

The two-time Asian Tour winner lost his Tour card last season after an uncharacteristic run of poor form but showed glimpse of his best golf when he fired six birdies for an eight-under-par 136 total at the challenging Wack Wack Golf and Country Club.

Joint overnight leader Chan Kim of the United States bogeyed his last two holes for a 72 to sit in second, two shots from Both, while Siddikur Rahman of Bangladesh was in third position following a 73 at the US$300,000 Asian Tour event.

Thailand’s Chawalit Plaphol and Korea’s Wang-Jeung-hun were a further shot back in tied fourth on 140 while 16-year-old amateur Rupert Saragoza and Miguel Ochoa led the Filipino charge in tied sixth place alongside India’s S.S.P. Chowrasia.

The towering Both, who started from the 10th tee, made four straight birdies from the 13th hole before chipping in from the greenside bunker on 18. He continued his hot run with another birdie on five for a two-shot cushion over Kim in Asia’s oldest National Open.

“It is rare day where you keep the big numbers off your card especially here because everyone will say that it is a golf course that can bite you at any stage. Every shot here requires 100% commitment,” said Both.

The 34-year-old won his first Asian Tour title in his debut season in 2003 before winning the 2009 Cambodian Open. He has never finished outside the top-50 on the Asian Tour Order of Merit except in 2013 where he ended the season in 74th place.

Due to his limited playing opportunities this year, Both knows that he must seal the deal in the Philippines, which will afford him with full playing rights on the region’s premier Tour.

“There has been a lot of good stuff in my game in the last couple of months. It is nice to be back up on the leaderboard. I have to keep pressing on and keep doing what got me here,” said Both.

Kim, winner of the 2013 Asian Tour Qualifying School, was rock solid before three-putting for bogey on 17 and hitting his tee shot into the woods which resulted in his third drop shot in round two.

“I made 32 putts today compared to 25 yesterday and that’s quite disappointing because I hit a lot of greens. I’m not too disappointed with my round. Even par on this golf course is really good. If I can get my putter rolling then I have at least one more low round in me,” said the 24-year-old Kim.

EurAsia Cup star Siddikur, a two-time Asian Tour winner, struggled with a cold putter after returning with one birdie against two bogeys, a contrasting round compared to his opening 66.

“I’m not disappointed because we have two days more to go. Every day is a different day and it doesn’t necessarily mean that you can get back into the same rhythm so that explains why I shot a 66 yesterday and a 73 today!” said Siddikur, the first Bangladeshi to play and win on the Asian Tour.

Thailand’s Chawalit will need to find a plan on how to negotiate his way on the back nine after dropping four shots on the homeward nine over two days.

“I started from 10 and I don’t know why but I don’t play well on that nine holes. I play nicely on the front so hopefully everything will come together. I was hitting it okay and my putting was not too bad,” said Chawalit, a four-time Asian Tour winner.

A total of 66 players qualified for the weekend rounds as the cut was set at five-over-par 149.

Scores after round 2 of the ICTSI Philippine Open 2014 being played at the par 72, 7222 Yards Wack Wack GcC course (a- denotes amateur):