Home 2020 Binder and KTM: on top of the MotoGP™ world in Brno 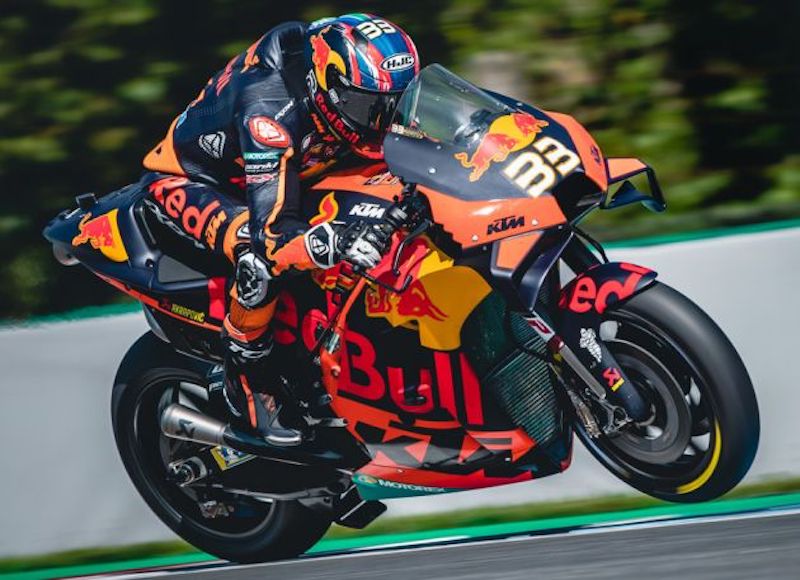 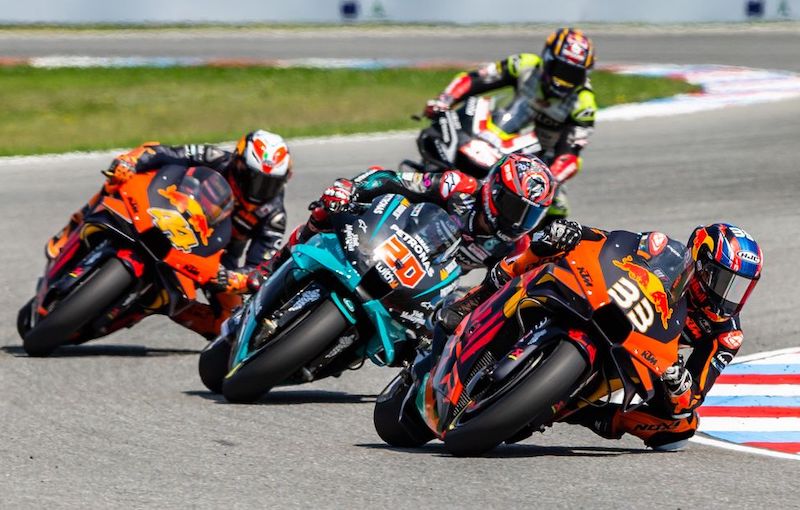 The South African stole the show to hand him and KTM their first MotoGP™ win in a remarkable race, Morbidelli and Zarco complete the podium

Red Bull KTM Factory Racing has done it. Brad Binder has done it. In an unearthly unpredictable MotoGP™ race at the Monster Energy Czech Republic Grand Prix, the South African – in just his third premier class race – stormed to an emotional first win to become the first rookie since Marc Marquez (Repsol Honda Team) to win in MotoGP™.

As the lights went out at the Czech Adrenaline Factory, Zarco couldn’t get the GP19 hooked up off the line with his holeshot device as the Frenchman slipped backwards, with the two Petronas Yamaha SRT riders getting good launches. Fabio Quartararo led into the first corner but was slightly wide, allowing Morbidelli to slip through and take the lead.

Aleix Espargaro (Aprilia Racing Team Gresini) also got away well from P4 to grab P3, which was soon P2 at Turn 4 as the Spaniard carved past the Championship leader, with the Red Bull KTM Factory Racing bikes of Pol Espargaro and Binder making a great start to sit 4th and 5th, with Zarco down to P6.

Binder was then a man on a mission. The South African cut through teammate Espargaro and then got by the latter’s brother on the Aprilia with ease, and soon he was right on the tailpipes of Quartararo. The Frenchman was a second off Morbidelli as that gap stayed pretty consistent in the opening few laps, hovering between 1 and 1.3 seconds.

Pol Espargaro was getting impatient behind Zarco after losing out to the poleman, but after a failed attempt the lap before, the number 44 was through at Turn 3 on Lap 6 and immediately set sights on his teammate and Quartararo, and the battle for second soon became a double factory KTM vs Quartararo fight.

Binder was then through on El Diablo on Lap 9. Turn 3 the chosen place, Binder was slightly wide but the rookie made it stick and, then, Pol Espargaro was through. However the Spaniard was wide at Turn 13 and lost the place, before huge drama then unfolded at Turn 1 on Lap 10.

Espargaro was wide at Turn 1, but not by much. Zarco, just behind, was on the inside line and as Espargaro swept back to get the run up through Turn 2, there was contact between the two. Zarco’s front wheel came in contact with Espargaro’s body and the KTM man was out – heartbreak for the latter as Race Direction began to look at the incident, later handing Zarco a long lap penalty. How costly could that be for Zarco?

There may have been heartbreak for one orange bike, but up the road, Binder wasn’t showing any signs of slowing up. With Binder past Quartararo, another Petronas Yamaha bike was about to feel the wrath. The 33 reeled in Morbidelli with ease and with nine laps left in Brno, Binder led a MotoGP™ race for the first time – but you wouldn’t have thought it.

Immediately, Binder started to stride clear of Morbidelli and on the same lap, Zarco took the long lap penalty. And the Frenchman couldn’t have nailed it better, some spectacular riding saw Zarco sweep round the outside of Turn 7 like his tyres were glued to the asphalt. An unreal and pinpoint piece of riding saw Zarco emerge just ahead of Quartararo as the latter clear hit tyre troubles at the mid-point, with Alex Rins (Team Suzuki Ecstar), Valentino Rossi (Monster Energy Yamaha MotoGP) and Miguel Oliveira (Red Bull KTM Tech3) starting to hunt him in.

Hear Brad Binder’s first words after taking a remarkable rookie victory in only his third MotoGP™ race, plus Morbidelli and Zarco

Up front, all eyes were on someone who was quickly making a name for himself just two and a half races into his MotoGP™ career. Morbidelli simply had no answer to Binder’s ridiculous pace and South Africa’s new sporting hero was leaving his more experienced competitors in his wake. With seven laps to go the gap was up to a second and a couple of laps later, the lead was 2.1. Was this really it for KTM?

Meanwhile, the Championship leader was in a spot of bother. Rins – still riding injured by the way – was swarming and slid underneath the YZR-M1 rider at Turn 4 with five laps to go, with nine-time World Champion Rossi soon following suit on the same lap. Quartararo quickly found himself lingering down in sixth, with Oliveira now smelling blood too. With four laps to go, Quartararo fell victim to Oliveira and at the front, Binder’s lead soon surpassed the three-second barrier as dreams started to turn into a reality for KTM.

Two to go then. Binder – barring a mistake – was in dreamland had this wrapped up. Morbidelli was safe in second but Zarco was far from safe in the final podium spot. Rins was hot on the heels of the Ducati and Zarco was clearly struggling with rear grip and with two to go, the gap was 0.6 between the GP19 and GSX-RR. That was soon nothing however and Zarco had a nervous final lap coming up.

Binder had a nervous final lap coming up too, but for very different reasons. Binder’s lead was over four seconds and this was it for him and KTM. More than four years of tireless work from the Austrian factory were about to become worth it as a new MotoGP™ star was being born. Binder made no such error and brought his RC-16 home to etch his name into premier class and KTM folklore. Childhood dreams realised across the board.

KTM have arrived to the party, Brad Binder has arrived to the party as MotoGP™ delivers the goods again. Morbidelli brought his Yamaha home to secure a fantastic maiden MotoGP™ podium in second, the Italian had a special weekend in the Czech Republic and he now moves into P3 in the overall standings.

Back to the final podium place battle and Rins was looking menacing. However, Zarco was holding firm and did so brilliantly to secure his first premier podium since the 2018 Malaysian GP. It was a huge day for the Avintia team too, who achieve their first MotoGP™ podium thanks to Zarco on a year-old Ducati. Pole and a podium is something they could have only dreamed of when they landed in the Czech Republic.

A huge shout out has to go to Rins too. Fourth place in Brno after suffering a dislocation-fracture to the shoulder at the Spanish GP is nothing short of remarkable. Close to the Suzuki man was Rossi who climbed to P5 from a P10 starting place in another great ride for The Doctor, with Oliveira finishing P6 to cement his best premier class finish having started 13th – top work from the Portuguese man. Quartararo won’t be too pleased to have finished 11 seconds from the win in P7, but it’s valuable points in the title race nonetheless.

Takaaki Nakagami (LCR Honda Idemitsu) finished one second adrift of Quartararo in P8, two seconds up the road from Jack Miller (Pramac Racing) who pips Aleix Espargaro to P9 on the last lap. Miller ended the day as the leading GP20 rider, just over a second up the road from Andrea Dovizioso (Ducati Team) as the pair salvage P9 and P11 from P14 and P18 starting positions.

Espargaro’s P10 was his first finish of 2020 – important for the Spaniard and team. Danilo Petrucci (Ducati Team) finishing 12th gives the Bologna factory plenty to think about as they head to the Austria double-header, hoping to keep their 100% record at the Red Bull Ring intact.

LCR Honda Castrol’s Cal Crutchlow finished 13th in Brno as he continues to battle a left scaphoid injury, and nine tenths behind him, Maverick Viñales (Monster Energy Yamaha MotoGP) takes just two points home in P14. The Spaniard will go back to the drawing board to find out what happened at the Czech GP as he loses valuable ground in the Championship – 17 points the gap to Quartararo now. Alex Marquez (Repsol Honda Team) 15th to continue his record of scoring at least a point in his first three MotoGP™ races.

A new star is born in MotoGP™ as Binder and KTM head to the factory’s home race in Austria for a double-header. The result sees Binder sit just three points behind Dovizioso in the overall standings, the man who has competed in three premier class races sits ahead of the likes of Rossi and Miller too. Quartararo extends his lead in the Championship despite a seventh place finish, not the end of the world for the Frenchman. And the best thing about it? We do it all over again in less than a week’s time.