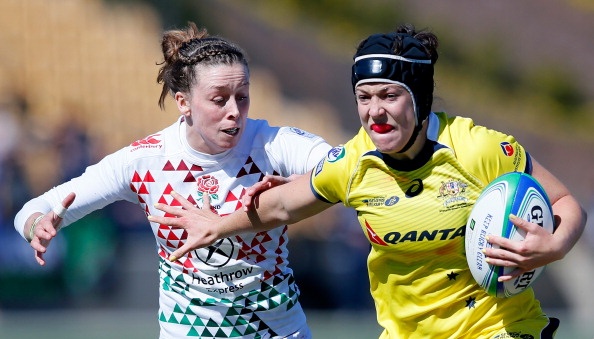 Cherry was named as the second recipient of this prestigious award at the end of the Amsterdam Sevens, the final round of the 2013/14 IRB Women’s Sevens World Series won by New Zealand.

She is the first Australian to win the award after Kayla McAlister of New Zealand received the inaugural accolade in 2013.

Cherry beat fellow nominees Charlotte Caslick (Australia), McAlister and Sarah Goss (New Zealand) after the quartet had been shortlisted by the management teams on the Series.

“I’m very humbled to receive this great award but I have always got to put it back to the team, they’ve worked so hard this season and it’s really reflected the hard work,” said Cherry, who also ended the season as the top try scorer on the Series.

Coach Tim Walsh added: “She is certainly an absolute talent and very well deserved, she has an array of skills and she does it in the big moments. Full credit to Emilee, she is an absolute joy to work with and a role model to any woman out there, young or old. It is very well deserved, she is an incredible athlete. She is certainly one in a million.”

IRB Chairman Bernard Lapasset said: “2014 is already shaping up to be a stellar year for women’s rugby with the record-breaking IRB Women’s Sevens World Series preceding what is set to be an outstanding Women’s Rugby World Cup 2014 in Paris.”

“At the heart of the breath-taking performances that have thrilled fans across the five global Series events have been the players and we have witnessed skill, speed and talent in abundance.”

“Many have shone, but Emilee Cherry’s performances throughout the Series have been dazzling. She is an exceptional talent, a true star and a deserving recipient of the 2014 IRB Women’s Sevens Player of the Year.”