Home 2022 Chinese Taipei’s Kevin Yu off to a flying start at Sanderson Farms... 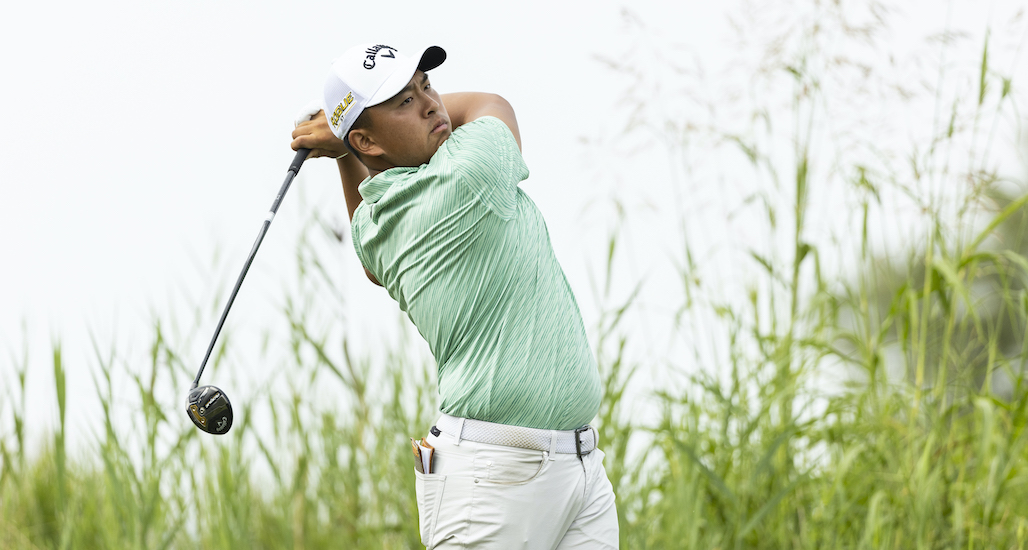 Chinese Taipei rookie Kevin Yu enjoyed a brilliant 5-under 67 for tied third place in the first round of the Sanderson Farms Championship on Thursday and credited time spent with compatriot C.T. Pan and a hot putter for his stellar start.

The 24-year-old Yu rattled home seven birdies against two bogeys at The Country Club of Jackson, Mississippi to finish the day one shot adrift of joint-leaders Davis Riley and Will Gordon, who carded 66s in the PGA TOUR event.

Yu was not the only Asian rookie to make an early impression as Korea’s S.H. Kim fired a commendable 68 to share 10th spot, while China’s Marty Zecheng Dou carded a 69 for T14. One-time PGA TOUR winner Pan, whom Yu looks up to as a mentor, opened a 70 to share 25th place.

“I was with C.T. to practice a little bit because in Houston, they have pretty similar conditions,” said Yu. “I think it was a really good opportunity to play with C.T. and practice in Bermuda conditions. I stayed with him for a few days. which was really good.”

A 32-foot birdie conversion on the par-4 18th hole was Yu’s highlight as he looks to make amends for missing the cut in the season-opening Fortinet Championship two weeks ago. Aside from a hot-putter where he rolled in 107’ 1” of total putts, he was also pleased with his ball-striking.

“Just really have to have confidence out there. I feel like the first week I was playing good, but I missed – my putting was – I think it was less in Napa, but off the tee, everything was really solid,” said Yu, who earned his PGA TOUR card after finishing 23rd on the Korn Ferry Tour Eligibility Points List last season.

“Getting to the green, you know you can make this putt. Just like being out there, you know you can compete with those guys. Just the confidence out there, and I think that’s going to help me a lot along the way. I think I did pretty good today, and hopefully the next few days I can keep up the good work.”

Yu said Pan’s mentorship has helped ease his way onto the PGA TOUR following a stellar amateur career at Arizona State University where he won three collegiate individual titles. He was also part of the gold medal-winning team for Chinese Taipei at the 2014 Asian Games, alongside Pan.

“It’s really fun because C.T. has been out here I think for five years by himself. It’s definitely really good to have someone on the same TOUR. There’s someone who’s already won on TOUR and he has been playing awesome for the last five years. It’s good to have him as my friend and as my mentor too,” said Yu.

Korea’s Kim, 23, brilliantly bounced back from two early bogeys on holes No. 12 and No. 13 to lie just two shots off the pace. The Korn Ferry Tour graduate responded with six birdies, including holing out for his third birdie from the greenside bunker on the par-4 17th hole. Compatriot Byeong Hun An has work cut out after a 73 to lie in T88, one ahead of China’s Carl Yuan in T107.

Local favourite Davis Riley, who’s playing in his second season on PGA TOUR, fired a flawless 66 to share the lead with Gordon, who mixed seven birdies with one bogey.