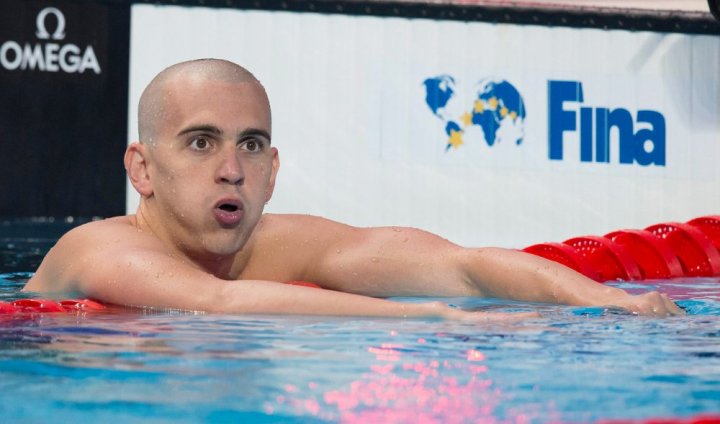 Laszlo Cseh sent a shot across the bows of Michael Phelps and Chad Le Clos with a stunning performance in the 200m butterfly as Hungary enjoyed a golden night at the European Championships.

Boglarka Kapas started the gold rush with victory in the 800m freestyle before Katinka Hosszu won her third title of the competition in the 200m individual medley, returning later to win silver in the 100m backstroke before the pair won their second golds of the night in the women’s 4x200m freestyle relay.

But it was Cseh who produced the standout performance and one that will cause ripples with the Rio Olympics only 78 days away.

Phelps was absent from last year’s World Championships where Cseh won out over Le Clos, the South African who beat Phelps in what was then his final 200m butterfly in this very pool in 2012.

On Thursday, Cseh was in a class of his own, winning in a championship record of 1min 52.91sec, 2.44sec ahead of Viktor Bromer in second.

While he went quicker in a performance-enhancing suit in 2008, Cseh became only the third man after Phelps and Le Clos to go inside 1min 53sec in a textile suit, splitting the pair.

One of the most decorated swimmers in history, Cseh has five Olympic medals but his collection is missing a gold, something he is working on rectifying in Rio.

“Everything I do is about becoming Olympic champion this summer,” he said.

“I know everyone talks about Michael and Chad but I cannot focus on that.

“Yes, I am looking forward to racing them and them being in Rio. But I am trying as hard as I can for myself. I don’t have that Olympic gold and I am working for it every day.”

Kapas reclaimed the 800m freestyle title she first won in 2012, wresting it back from Great Britain’s Jazmin Carlin.

Sixth in the event in the same pool in 2012, the 23-year-old took the lead at the 350m mark, one that was never relinquished despite the best efforts of the tenacious Carlin and Tjasa Oder of Slovenia.

Kapas’ time of 8min 21.40sec, 2.12secs ahead of Carlin, guided her to equal third in the world rankings as a number of women jostle for position behind Katie Ledecky, the American who has taken freestyle into uncharted territory.

She said: “I’ve never been in such great shape even though we didn’t taper for this event. I felt awesome during the warm-up, swimming never felt so good.”

Hosszu had already won double gold in the long medley and 200m backstroke before she took to the blocks for the four-length medley.

She turned only marginally ahead after the opening butterfly leg with Britain’s Siobhan O’Connor snapping at her heels but from thereon in, the Hungarian drew away to win in a championship record of 2:07.30 –- almost seven seconds quicker than four years ago when she trailed in eighth in the Olympic final.

Mie Nielsen won her first outright European title in the 100m backstroke, two years after she shared the top of the podium with Hosszu in Berlin.

The Dane had served notice of the form she was in, setting two new championship records en route to the final.

The daughter of Benny Nielsen, silver medallist in the 200m butterfly at the 1988 Olympics, and Lone Jensen, who represented Denmark at the 1978 World Championships, she was second at halfway before overhauling Hosszu on the second length to lower the championship mark to 58.73.

Murdoch’s time of 2:08.33 propelled him to fourth in the world in 2016 but he will not represent Britain in this event in Rio, locked out in third at the Olympic trials but instead will compete in the 100m.

Camille Lacourt won the 50m backstroke before Hungary rounded off their golden evening with Hosszu and Kapas bringing home their second golds of the night in the 4×200 freestyle relay in 7:51.63 ahead of Spain and the Netherlands.