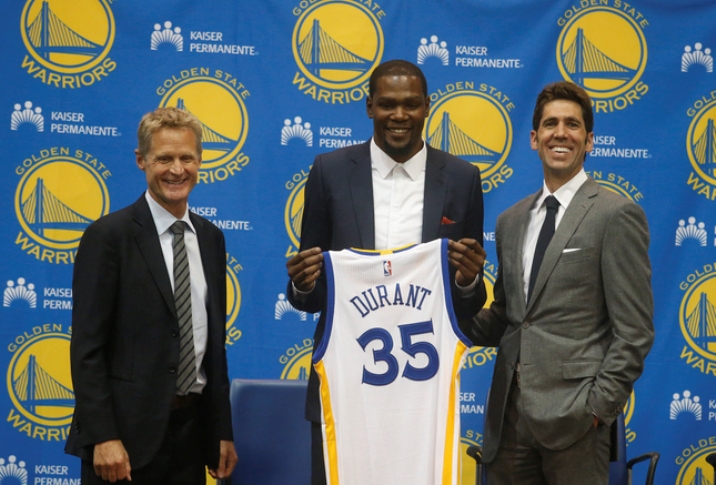 NBA star Kevin Durant dismissed critics of his leaving the Oklahoma City Thunder for Golden State on Thursday after signing a two-year deal worth $54.3 million to join the Warriors.

“All I can control is how I come to work every single day and help this team get better,” Durant said. “I can’t worry about the outside noise.”

Four-time NBA scoring leader Durant, the 2014 NBA Most Valuable Player, combined with Russell Westbrook to lift the Thunder to the Western Conference finals four times in the past six years but has never won an NBA title.

Some say joining the Warriors was his way of trying to take a shortcut to a crown by joining a Golden State club that retains the core of a title that won the 2015 NBA crown and came within one game of a championship repeat last month.

“It’s not a popular decision but I can live with it,” said Durant. “Nothing in this league is easy. There are no shortcuts. This is the hardest road. I’ve never lived in this community, don’t know anybody here.

“We live in this superhero comic book world and you are either a superhero or a villain. I understand the fans in Oklahoma City and around the world are upset. I made the decision based on what I wanted to do.

Durant, 27, can opt out of the deal next July and take advantage of television money boosting the NBA salary cap to $107 million a club to test free agency again. But he says the Warriors are in his long-term plans.

“I figured it was time for me to try a new challenge and there’s no better place to do it,” Durant said. “I went with my gut and my instincts and I trusted the situation. I’m out of my comfort zone. I’m super excited. I’m pumped to get started.”

Durant said what made a big impact was a sense of belonging from his new teammates — two-time NBA Most Valuable Player Stephen Curry, 3-point sharpshooter Klay Thompson and forwards Draymond Green and Andre Iguodala — in a visit to make their pitch last weekend.

“When they came in to see me, everything was real. They were a huge family walking in. They were a great fit,” Durant said. “I just felt like I wanted to be a part of it.”

Durant will play his first game in Golden State’s arena since joining the Warriors on July 26 as a member of the US Olympic team against China in a warm-up contest for Rio.

It was in Oakland where the Warriors ended Durant’s title dream in May, defeating Oklahoma City to complete a rally from 3-1 down to win the best-of-seven Western Conference semi-finals.

Golden State then squandered a 3-1 NBA Finals lead in losing to Cleveland.

Despite coming so close to a repeat crown, the Warriors dumped a fistful of reserves and traded Australian center Andrew Bogut to Dallas to make salary room for Durant.

“We just try to get better,” Warriors general manager Bob Myers said. “You never expect to get this much better.”

Durant, whose 27.4 points a game ranks as the third-best career average in NBA history, called telling the Thunder he was leaving “the toughest day of my life” and had trouble explaining himself to ex-teammate Russell Westbrook.

“I talked to him. It was tough. I’m sure he wasn’t happy about the decision but he respected it,” Durant said.

“I wanted to leave with some class and dignity. It was difficult, being in a place for so long, the relationships I built, it was hard.”

Neither can Warriors coach Steve Kerr, who sees Durant as an easy scoring fit, adding more inside punch to go with Curry and Thompson in an up-tempo attack.

“You can’t do any better than adding KD to the current crew,” Kerr said. “To play with them and play our style, I think that was attractive to him. It does feel like it should be a perfect fit. It’s going to be a lot of fun once we get rolling.”- Agence France-Presse