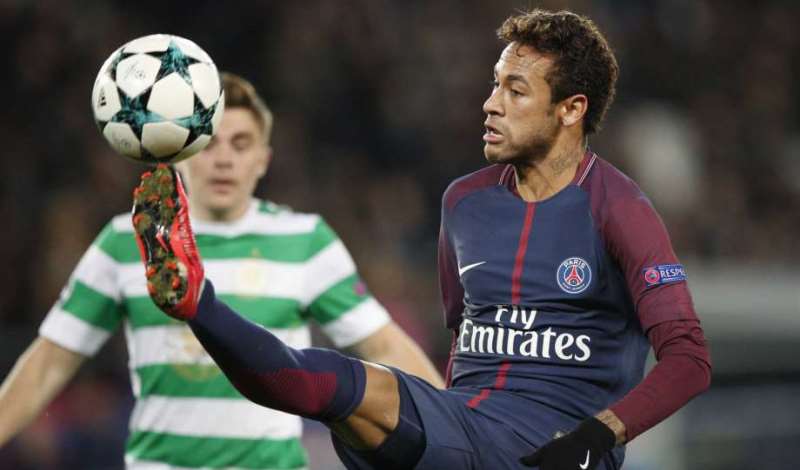 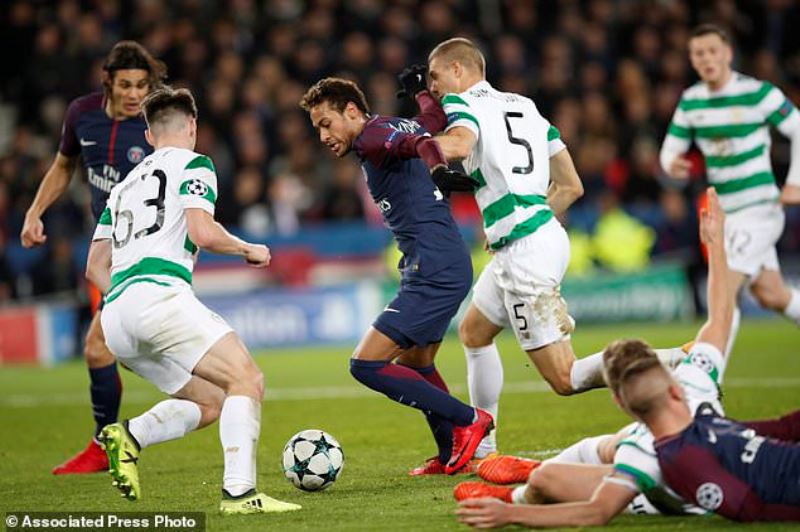 PSG came from behind to slaughter the Scottish side 7-1 at a Parc des Princes in thrall to the Brazilian, who scored twice after Moussa Dembele had put Celtic ahead.

Edinson Cavani also netted a brace, while Kylian Mbappe, Marco Verratti and Dani Alves got the French club’s other goals to take them to a group-stage record tally of 24 with one Group B match still to play.

Wednesday’s win was also PSG’s biggest ever in the competition, seeing off the previous best performance, a 7-2 win against Rosenborg in October 2000 when it was a 21-year-old Nicolas Anelka scoring twice.

Qualification for the last 16 was already assured before this round of games, and Bayern Munich’s 2-1 win at Anderlecht means the Germans could yet snatch top spot from Paris with the sides meeting next month.

But to do that Bayern would need to win at the Allianz Arena by a bigger margin than their 3-0 defeat in Paris in September, something that seems highly unlikely.

“The objective is to be first in the group and we are not there yet. We still have to play against Bayern and we have the advantage of the 3-0, but it will be a great match and a very difficult one,” said Emery.

The Spanish coach played down any fears of an embarrassing result similar to their 6-1 loss in Barcelona in the last 16 last season, which came after Paris had won the first leg 4-0.

But he said: “Bayern are capable of it. It will be a good test. They are among the sides who could win the Champions League.”

With Neymar back on song after a dip in form over the last six weeks, PSG can head to Monaco in confident mood this weekend knowing a win will move them nine points clear of the reigning champions a the top of Ligue 1.

The contrast between those sides could hardly be greater given Monaco were dumped out of Europe on Tuesday, losing 4-1 at home to RB Leipzig.

“Sunday’s game away at Monaco, whom we respect, will be a great test as well but Bayern is the big match,” added Emery before he sung Neymar’s praises.

“He was extraordinary. There were a few matches where he stopped playing for different reasons but when he is in form physically and his mentality is right, he can play.”

Neymar enjoys playing against Celtic and has now scored seven times against the Scottish side, one of which came in Barcelona’s 7-0 win last season.

That remains Celtic’s biggest European defeat, but this was another humbling loss for Brendan Rodgers’s side after they suffered their heaviest home loss in continental competition to PSG in September, losing 5-0.

In the midst of a British record unbeaten run of 64 games, the Hoops’ limits in Europe continue to be brutally exposed, although they should still take third place in the group ahead of Anderlecht.

“In a strange way there were lots of good moments for us,” said Rodgers.

“The lessons for us are that we can keep the ball a bit better, and secondly you’ve got to defend better, but you also have to admire the sheer quality of Paris Saint-Germain.

“It’s a sore one, but I’m certainly not anywhere near as disappointed as I was against Barcelona, funnily enough,” added Rodgers, whose team must try to bounce back in time for a League Cup final against Motherwell on Sunday.

“Your professional pride is hurt, because when you lose seven goals you’re not so happy, but it’s dovetailed with admiration for a side who I’d be very surprised if they don’t make the final.” – Agence France-Presse