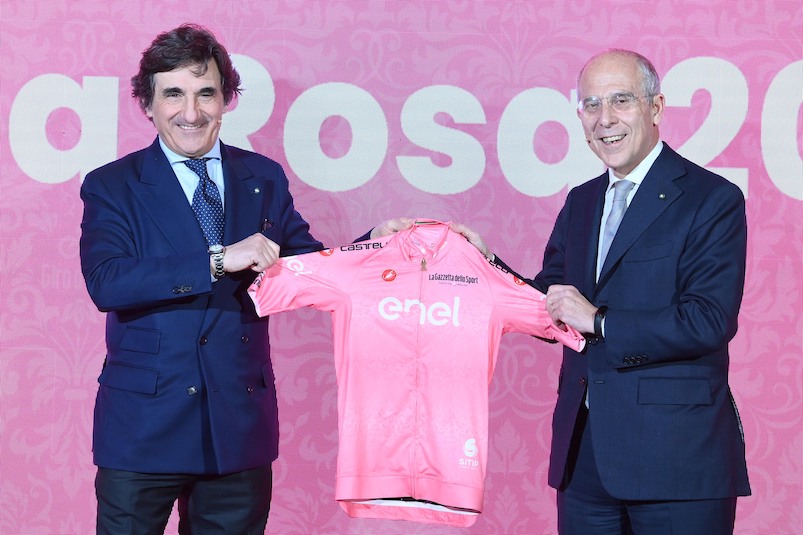 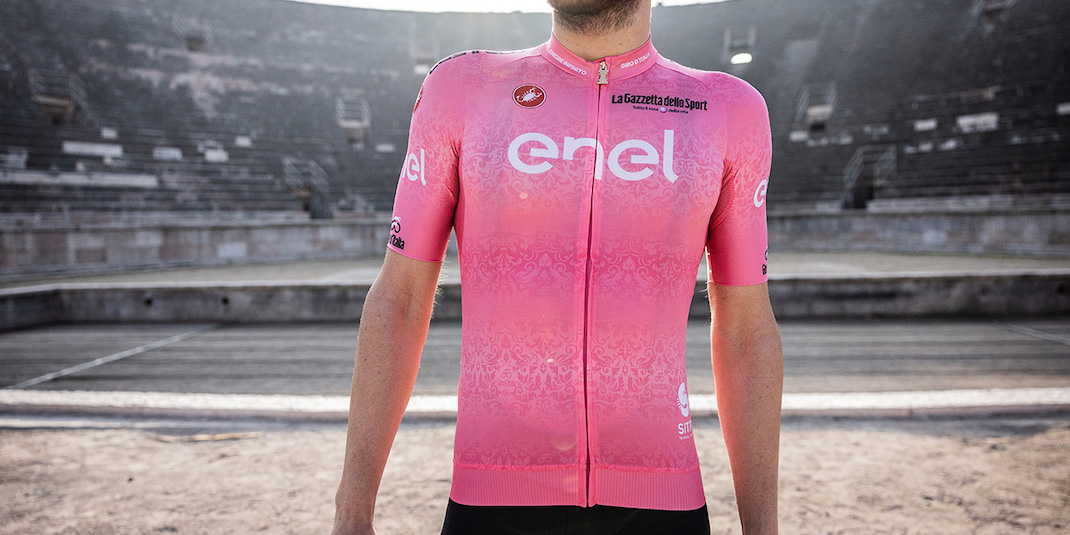 The new Maglia Rosa will be worn by the leader of the general classification of the Giro d’Italia, from 6 to 29 May – starting from Budapest end ending in Verona.

Enel will be the ‘Top Sponsor’ of the jersey, which is this year dedicated to the 60th anniversary of the country’s main electricity company and world leader in the renewable energy sector.

The Giro d’Italia and Enel partnership dates back to 2016 and will continue until 2024 thanks to a new 3-year partnership with RCS Sport. The 2022 Maglia Rosa has been designed by Castelli and is made with a technical fabric produced by Sitip.

For the occasion, MAXXI hosted Arthur Duff’s “Light Cycles”, a project curated by Valentina Ciarallo. It’s a luminous journey of laser projections, an orbit that runs from south to north parallel to the 105th Giro d’Italia, touching many of the stages of the Corsa Rosa: from Catania to Naples, then up to Parma, Turin and finishing in Verona. The universe of thoughts comes to life in a circular manner, filling the architecture of the squares and the facades of the monuments in the darkness of the city. The narration, which for each place takes on its specificity showing an unprecedented vision, comes to life step by step with a progressively pressing pace that culminates in the grand finale in Verona.

The exhibition also includes the last 6 Maglie Rosa linked to the partnership with Enel as well as some historic Maglie Rosa from the Ghisallo Museum.

Francesco Starace, General Manager and CEO of Enel said: “For over a century, the Giro d’Italia has taught us that to reach the finish line, running fast is not enough, you also need to be able to face difficulties and change. These are values that, together with environmental awareness and care for the landscape, have led us to support the Giro d’Italia since 2016 and to renew the partnership with the Maglia Rosa for another three years, until 2024. And it is a particular source of pride to be able to to announce the continuation of this journey in conjunction with Enel’s 60th anniversary, to seal a long and passionate journey on the road to sustainability and change: with the spirit of those who, just like riders, look ahead with tenacity and enthusiasm.

”The President of RCS MediaGroup Urbano Cairo added: “Enel has been a travel companion of the Giro d’Italia since 2016 and will be with us for the next three years as well. The renewal of the partnership, which includes the sponsorship of the Maglia Rosa, has a very important meaning. The symbol of the Corsa Rosa is recognized worldwide and has always conveyed passion, sacrifice and determination. Enel will have in addition, through the Maglia Rosa and more, a great media exposure thanks to the images of the race broadcast in 200 countries across five continents. The Giro d’Italia is just around the corner – there is exactly one month to go before the start in Hungary – and we are certain that this year we will once again offer an event and a world-class showcase from which all of our stakeholders will benefit“.

The video – Maglia Rosa. The Opera. – was created inside the Arena di Verona and is a mix of emotional images and a focus on the jersey with a treatment of warm colors and epic music. It was shot in a location among the best known Italian excellences in the world where, on May 29, the Giro d’Italia will end.

A true tribute to Italian craftsmanship. The “damascato” (Damask), a texture printed on the Maglia Rosa 2022, was introduced in Italy by the Maritime Republics of Venice and Genoa thanks to the relations they had with the East. Its origins date back to the 5th century, but its name derives from Damascus, the Syrian city that was a major producer and exporter from the 12th century.

The jersey does not only celebrate Italy’s priceless heritage however. The jersey was developed in the wind tunnel to offer maximum aerodynamics and to be extremely light and highly breathable at the same time. Together with the fabric manufacturer Sitip, Castelli has chosen 100% recycled fibres to reduce the environmental impact of a jersey that looks both to the past and to the future. – www.giroditalia.it