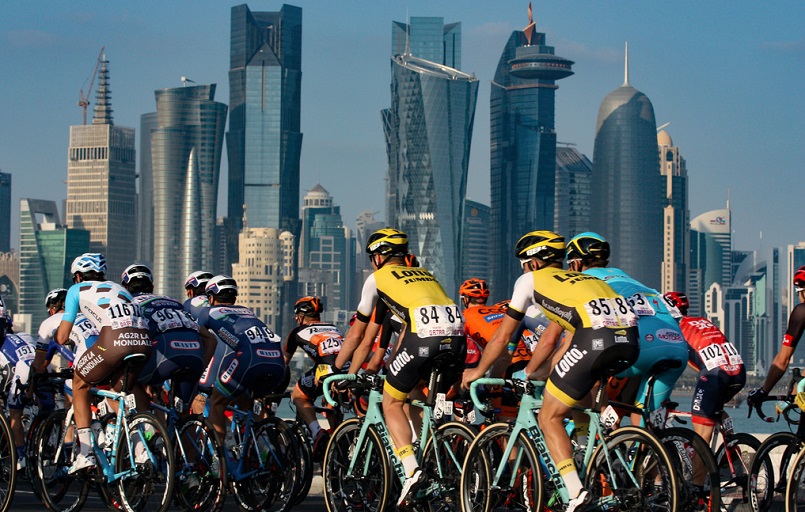 Fierce heat and sparse crowds have overshadowed the first world road race championships to be hosted in the Middle East as riders act as guinea pigs in a groundbreaking trial to test the impact of extreme heat on performance.

The eight-day championship culminates with Sunday’s blue riband men’s road race, promising a great show on television at least on The Pearl, an artificial island, against a backdrop of marinas, luxury buildings and sunny skies in Doha.

“I cannot explain how excruciating it feels to be riding 40km through the desert. You’d expect organisers and the UCI to have some knowledge about cycling.”

Several riders, including Dutch Olympic silver-medallist Tom Dumoulin, have swallowed a small pill called an “E-celsius” before races, which allows their temperature to be measured.

The pill sends a signal to a receiver used by doctors so they can constantly monitor a rider’s temperature, says Sebastien Racinais, of the Doha-based Aspetar clinic which is providing medical staff for the championships.

Medics insist no riders have suffered amid claims Dutch cyclist Anouska Koster crashed in the team time-trial due to heat exhaustion.

“It was not a problem of heat exhaustion, it was a problem of exhaustion performing a time trial,” said Dr Yorck Schumacher, also of the Aspetar clinic.

“She (Koster) confirmed that she is always like that in time trials. The heat in this championships should not be an issue.”

Schumacher said that other factors such as wind and humidity also have to be considered to calculate the full impact of conditions.

If done so, major tournaments such as the 2008 Beijing Olympics and the 2014 football World Cup in Brazil were tougher for competitors and players than this week in the Gulf, he said.

Schumacher estimates that “around 15-20 cyclists for any event” have used the tiny pill in Doha with the data to be examined later to see how competitors deal with the heat and recovery.

Meanwhile, temperatures in Doha have receded slightly making it likely that Sunday’s event will cover the full 257km.

Organisers had said they could reduce race lengths because of the heat, but there have been no reductions.

“I’ve competed in about 100 races during my career in such heat,” said Belgian Tom Boonen, one of the favourites on Sunday.

“We’ve known for a long time that the worlds would take place in Qatar, so we knew it was going to be hot. If you organise a race in Siberia it’s going to be cold.”

Heat was also a subject of debate concerning the 2022 World Cup in Qatar, with football’s world governing body FIFA deciding it would take place in November-December.

Frustration has also been vented over the lack of spectators with a few national flags, and a handful of foreign fans all that greeted competitors.

“It would sure be nice to have some more fans here to celebrate with,” said Germany’s Tony Martin after claiming the individual time-trial for a record-equalling fourth time and his second gold of the week.

Governing body, the UCI, which confirmed on Saturday through president Brian Cookson they received 10 million Swiss francs (9.2m euros, $10m) for the worlds, said the choice of Qatar was in line with their “globalisation” policy with the Middle East having never hosted.

“The atmosphere was a bit lacking,” said Van Avermaet. “But competitors at these worlds which are geared towards television had above all a race to do, a title to win.”

Former French champion Laurent Jalabert, now a consultant for France Televisions added: “It’s less fun for the riders to compete on a course where there are few spectators. But when you’re an athlete, the competitive edge takes precedence over everything else.

“For television viewers, it changes nothing or not much. World championships, there have been very tough, rainy, scorching. The most important is that the races are regular.” – Agence France-Presse