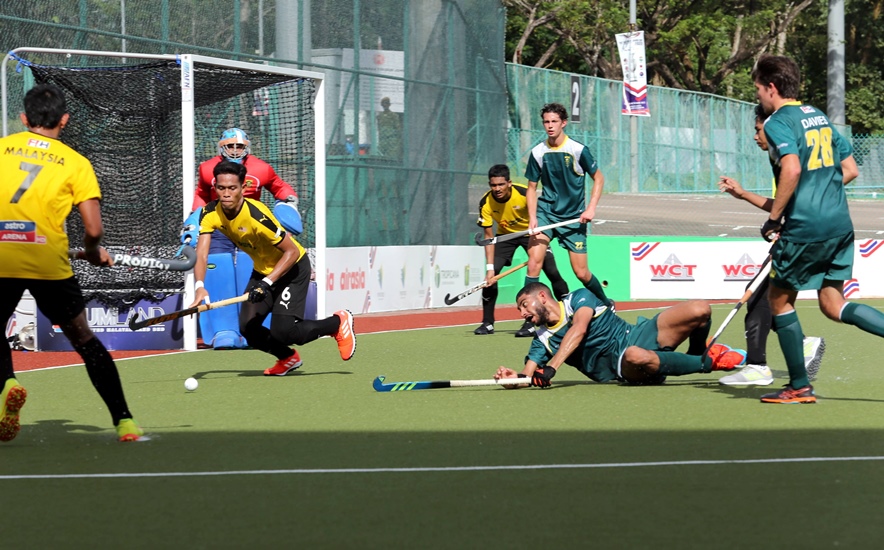 Malaysia closed accounts in the 10th edition of the Sultan of Johor Cup with another uplifting fighting performance in their 3-2 defeat to South Africa at the Taman Daya Hockey Stadium in Johor Baru today to finish sixth in the final classification.

Having lost 3-1 to the more experienced South Africans in an earlier round-robin group match, the Malaysians this time were able to match their opponents and made it a much closer tie.

South Africa opened the scoring in the 11th minute through Neil Raath, who scored the first of his brace in the match to give South Africa the lead.

South Africa regained the lead in the second quarter when Hans Neethling slotted home in the 25th minute and surged further ahead when Raath struck his second goal of the match in the 36th minute.

Malaysia lifted their game in the final two quarters and got their second goal when Zulhanif Sahran scored from a 56th minute penalty corner to set up a grandstand finish as Malaysia pushed for an equaliser with the home crowd on their feet urging them on.

But the South Africans held strong to seal the victory and subject Malaysia to a bottom-place finish for the first time since the second edition of the Sultan of Johor Cup in 2012.

“As everyone is aware, we have only just started the process of building this team and there are many weaknesses, particularly in the physical aspect, which has arguably been a major factor in our defeats through this tournament,” said Malaysian under-21s coach Amin Rahim.

“These are areas that we will address in the next phase of preparations for the Junior World Cup next year and I hope the players who are selected for the next phase are prepared for these changes and give their full commitment to the process as we look to build a stronger team for that big assignment.”

Malaysia ended the tournament with five defeats, including today’s defeat to South Africa, and one draw against Japan in their final round robin group match. They conceded a total of 25 goals and scored nine.

“If we look at the scorelines and the points, then of course we were right at the bottom and conceded so many goals. But for me, this tournament was to assess the performances of each player. If we look at the graph of play then we can see that with each match there was an improvement in terms of performance.

“With a very new team with players who are only having their first taste of international hockey, we were also at a disadvantage physically, which our players lacked, but we did get to see improvements and some good hockey being played by our team in the last three matches of the tournament,” said Amin.

“The players will now have a two-week break, after which we will call up the whole squad to make more assessments and after that, I will pick a squad of 30 players that will be in the training squad for the Junior World Cup next year. From there we will work on the physical preparations, which are a priority now, as well as tactical and other areas we need to be ready for the Junior World Cup.”