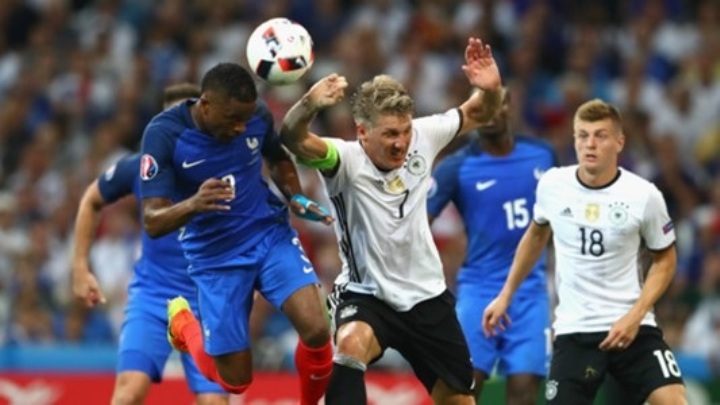 MICHEL Sablon, Singapore’s Belgium-born technical director, doesn’t agree. He says he’s “very doubtful about the referee’s decision to give France a penalty in the first half”.

After the Germany versus France match in the Euro 2016 semi-finals, he told The New Paper: “I saw the replay three or four times and I couldn’t see how it was a penalty. Perhaps there was a handball incident earlier that wasn’t punished and this was compensation for the French.”

What a joke to interpret this turning point of a pulsating semi-final in Marseille in the first-half injury time. Germany captain Bastian Schweinsteiger committed an unfathomable error, raising his arm to a cross in the box, leaving him with no cause for complaint when the ball struck his hand off the head of Patrice Evra and a penalty was awarded.

In my opinion, the immediate response to the Italian referee Nicola Rizzoli pointing to the spot, when he was very close to play, and booking the Germany captain with a yellow card, was one of absolute class.

Schweinsteiger’s arm was away from his body and his right hand blocked Evra’s attempt from potentially hitting the target. You could hardly blame Rizzoli for calling it.

The Laws of the Game reads: “Handling the ball involves a deliberate act of a player making contact with the ball with his hand or arm.” The referee must take the following in consideration:

2) The distance between the opponent and the ball (unexpected ball).

3) The position of the hand does not necessarily mean that there is an infringement.

You may not see from the terraces of the stadium or the air-conditioned comfort of your apartment, and when it is at full speed, you have to be as close to play as the referee, whose view to the incident wasn’t blocked.

Yes, the internet was quickly ablaze with conspiracy theorists and the usual outraged brigade. Then, after numerous replays had been shown, people split into two camps; Those who believe the “deliberate” handball rule should be enforced verbatim and those who take the predominant view of referees that a penalty or free-kick should be awarded when a player’s hands or arms are in an unnatural position.

The simple philosophy, Mr Sablon, is never to advice your players to raise their hands, in whatever way in the penalty-area. Certainly, you can never teach your free-kick “wall” in the final one-third of play, to have their hands raised when defending a free-kick!

Schweinsteiger, by raising his hand when challenging for the ball, put himself in a very dangerous and compromising position to be penalised and when the ball makes contact with his hand, it’s right to be interpreted “handling the ball deliberately (except for the goalkeeper within his own penalty area)”.

There was an intention to block the ball with his hands.

The view of most people is that he was punished rightly for being caught out of position and had to jump at the ball like a low-rent Superman to get his head anywhere near it. That it hit his hand was probably not intentional but denied Evra from being rewarded for timing his leap and positioning his body much better than the German midfielder did.

Indeed, Mr Sablon, there are some grey areas surrounding the handball rule and how officials arrive at decisions.  In my opinion, the referees look at two clear specifics: Did the hand or arm go towards the ball or in a manner which would block the ball, or is the hand in a position where it would not normally be?

Again, none of this is in the football rulebook but most people would accept that this is a fair way of looking at handball decisions. The fact that many players, Sergio Ramos being a prime example, lock their arms behind their body when attempting to block shots inside the 18-yard box shows that defenders expect penalties to be awarded if the ball strikes an arm or hand whether intentional or not.

Law 12 says “handles the ball deliberately or in a way that is deemed unnatural”. Wouldn’t it help put a stop to the constant furore surrounding these decisions?  It would also leave referees a little less open to abuse or libellous accusations.

Had a penalty not been awarded, it’s not a stretch to say the Germans might be playing on Sunday in Saint-Denis.

But please don’t point the finger at the referee because his view and interpretation, by being close to play, was very correct.