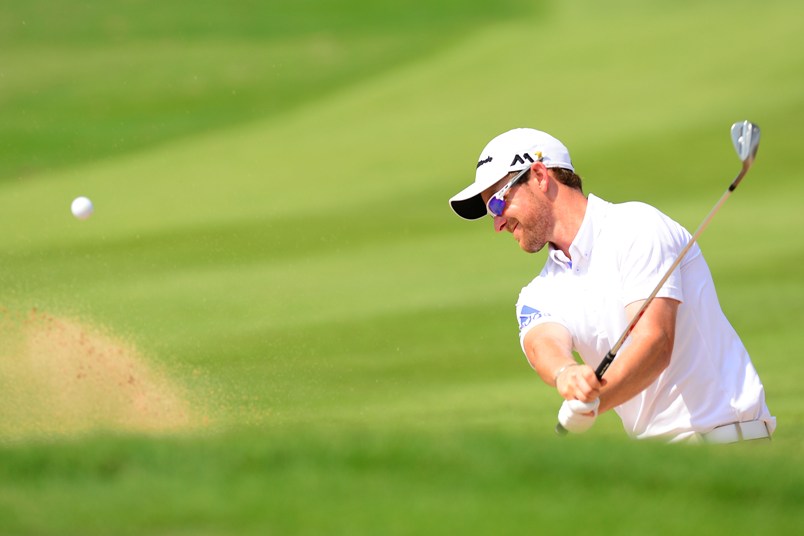 Marcus Fraser of Australia birdied the closing two holes to share the second round clubhouse lead with countryman Kalem Richardson in the weather-interrupted BNI Indonesian Masters presented by Zurich on Friday.

Fraser, ranked second on the Order of Merit, finished in the morning session with seven birdies against two bogeys for a five-under-par 67 tie at the top alongside Richardson (68) on eight-under-par 136 at the Royale Jakarta Golf Club.

The halfway stage of the US$750,000 Asian Tour event was suspended for the day at 5.45 pm due to fading light as a total of 27 players will return to resume their rounds at 6.30am on Saturday. Play was suspended for an hour due to lightning threats in the afternoon.

Thongchai Jaidee of Thailand dropped two shots in near darkness to finish the round on a 69 to trail by one alongside Tirawat Kaewsiribandit (68), S. Chikkarangappa (67) of India and co-overnight leader Masahiro Kawamura (71) of Japan.

Fraser, who needs a victory this week to overtake Scott Hend on the Order of Merit, was delighted to return to form and build on his two-day momentum. After finding 16 greens, the Australia was held back by a cold putter where he made 29 putts.

“My game was pretty steady. I felt like I played pretty similar to what I did yesterday. I just had one poor drive on 17. That was a terrible golf shot and I made a bogey. Other than that it was steady all day. Hopefully I can keep building on the score I’m on and keep playing well. Hopefully I can make some putts,” said Fraser.

After struggling with a knee injury earlier this year, Richardson, aiming for a first Asian Tour victory, stayed in the moment and was rewarded with a share of the lead.

“I’ve been struggling a little bit with the game. It was nice to get through a couple of challenges today and stay in the moment. I’ve been getting carried away and that’s been costing me,” said the Australian.

“My left knee was inflamed (from cycling) and I’ve been getting a lot of treatment from the staff here and managing it myself. It is feeling a lot better and I’ve not had any dramas in the last few weeks,” added Richardson.

Ranked 44th in the world, Thongchai, the only player to win three Order of Merit crowns, continued his rich vein of form after finishing inside the top-10 in Korea last week.

He charged into contention with a solid round and was forced to finish the last hole as nightfall landed over the Royale Jakarta course to avoid an early morning call on Saturday.

“We rushed in the last two holes because we didn’t want to come back early tomorrow. I played very well and I have no complaints with the round. At least now I know I will have some rest and have a chance at the weekend,” said Thongchai.

With two top-10 results on the Asian Tour and a victory on the local circuit, the confident Chikkarangappa charged up the leaderboard with a solid homeward nine which included four birdies.

“I’ve been going through positive weeks. It is not only this week. I’ve been following up on my solid performances and I’m really confident with how things are going. Hopefully I can do something this week.

“It feels like a home tour this week. Anirban (Lahiri) is here and we did some work on the range and helping each other. I have positive energy when he is around me because I get the best advice from him,” said the Indian, who is close friends with Lahiri.

Scores after round 2 of the BNI Indonesian Masters being played at the par 72, 7340 Yards Royale Jakarta GC course (am – denotes amateur):