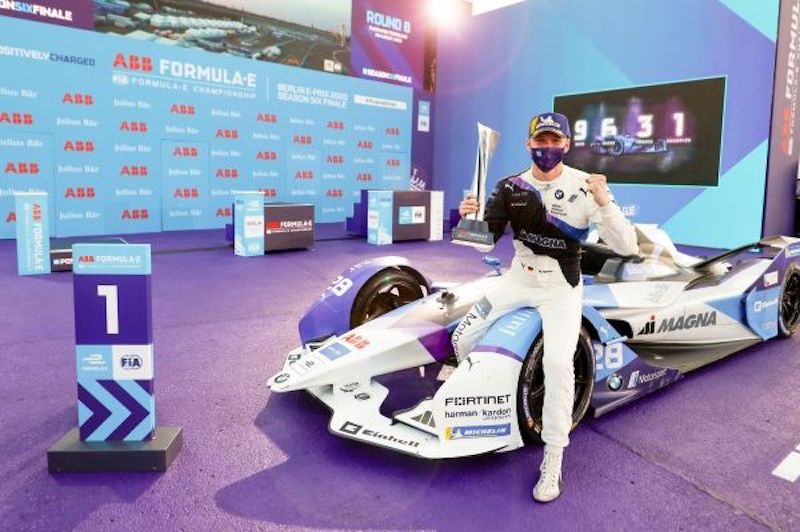 After the current season drew to a close with the six races in Berlin (GER), BMW i Andretti Motorsport lays the first steps for Season 7 of the ABB FIA Formula E Championship.

After his successful maiden season, Maximilian Günther (GER) will drive the BMW iFE.21 for the team in 2021. Alexander Sims (GBR) will move within Formula E after two years as a BMW i Andretti Motorsport driver.

With his win in only his third race for BMW i Andretti Motorsport at the Santiago E-Prix (CHI), Günther got off to a great start and went down in Formula E history as the youngest winner of all time. With his second win of the season at the finale in Berlin (GER), he delivered another highlight. He finished his maiden season ninth in the driver’s standings, with two wins and one second place.

Sims ended his second season as a BMW i Andretti Motorsport driver 13th in the driver’s standings. His big moment was at the season opener in Diriyah (KSA), where he secured pole position in both races and celebrated his first Formula E win on the Saturday.

After a total of 24 races for the team, Sims is striking out in a new direction in Season 7. Who will join Günther to take the wheel of the second BMW iFE.21 in Season 7 will be announced in due course.

“I’m delighted to take on the next Formula E season with Maximilian Günther. It is incredibly valuable for the team to have a driver so focussed, professional and fast despite his young age at BMW i Andretti Motorsport. His two victories this season in Santiago and Berlin were real highlights. Maximilian will build on the experience gained in Season 6. The team and he will be even better in tune with each other. All this will hopefully lead to even more success on the racetrack,” said BMW Group Motorsport Director Jens Marquardt.

“As far as the departure of Alexander Sims is concerned, the key thing for me is that we go our separate ways in Formula E by mutual agreement. We had two great seasons together. Alexander has matured from a rookie to a winner at BMW i Andretti Motorsport. It was a great pleasure to watch him during his big weekend in Diriyah. We regret that we won’t race together next season, wish him all the best for the next chapter in his Formula E career and look forward to the sporting contest on the track.”

Sims said: “I would like to thank every single member of BMW i Andretti Motorsport for their hard work and belief in me over the last two seasons of Formula E. The working relationships have turned into friendships and I value that enormously. There have been a lot of great memories made and experiences enjoyed together, notably my first pole position in New York and first race win in Diriyah. The BMW family brought me into the professional motorsport world and has enabled me to go on an incredible journey that I am truly thankful for. Next season I will join a new racing family in Formula E, but I look forward to seeing all my BMW friends around the paddock in the coming seasons, and wish the team all the best in the future.”

Günther said: “I am delighted to continue racing for BMW i Andretti Motorsport in Formula E, and to go in pursuit of titles with them. I have felt right at home from the moment I was included in the squad of BMW works drivers last year. I am very happy to remain a part of the BMW family. We have made it onto the podium three times in our first year together, twice as winners. In the Drivers’ Championship, we were in contention for second place until the final race. That shows how strong our package was. Formula E will be promoted to FIA World Championship status next season, and the first World Championship title is extra motivation for us. We will continue to work hard and do all we can to continue to make a statement and enjoy more success next year.”

Datuk K. Rajagobal has been appointed as the new head coach of Brunei Darussalam.