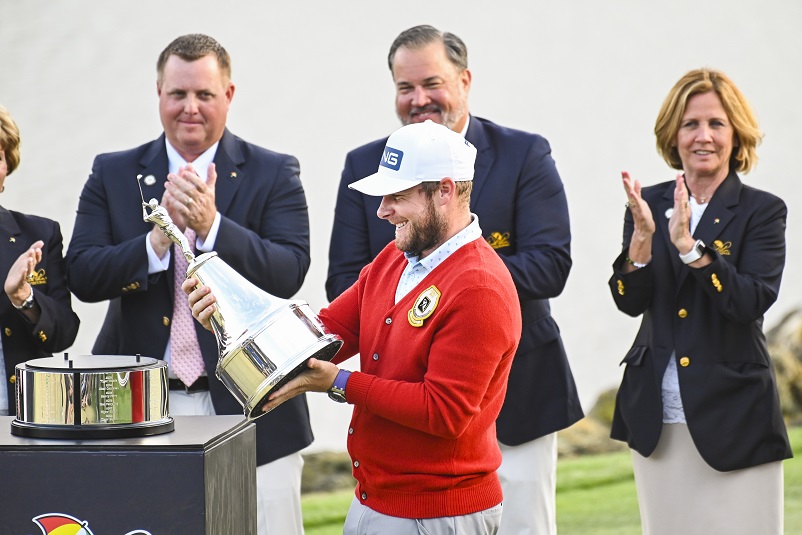 Somewhere in the lengthy list of curiosities that sat at the heart of his infamous PGA Tour career, there is this: He had more legal names than victories.

That’s right. The man born Phil McGlenno later became Phillip McClelland O’Grady, then simply Mac O’Grady. That accounts for a 3-2 decision over his victories. (For the record, they came at the Sammy Davis Jr. Greater Hartford Open in 1986 and the Tournament of Champions in 1987.)

If you’re guessing O’Grady was a bit on the eccentric side, give yourself a gold star. Heck, he once tried to enter a team competition – by himself. Said he was going to play lefthanded and righthanded.

Tournament officials were not impressed and refused O’Grady’s request. Which never was much of a problem with O’Grady; he was easily dismissed, given his quirkiness.

Should you be in the market for a current player who personifies what O’Grady meant, may we introduce Tyrrell Hatton? The 29-year-old Englishman can go from bleeding to hemorrhaging to painting a masterpiece in the time it takes to play two holes – with brilliant dialogue to dress it up.

“Head Case Hatton,” he conceded his name would probably be if he were a disc jockey.

Funny line, but the truth is, Hatton is a showcase event on the golf course – and not just because he’s wearing out a pathway to the winner’s circle. Actually, the European Tour victories in Abu Dhabi in January and at the BMW PGA Championship last October cemented his spot in the elite atmosphere of global players (he rose to No. 5 as of Feb. 14), but did nothing to make people stop talking about his on-course antics and mannerisms.

And nowhere did he generate a sort of social media frenzy than at the 2020 Arnold Palmer Invitational, as much for his gut-check maiden win on the PGA Tour as for the string of sarcasm and self-deprecating commentary that he leveled.

“Have you seen a worse golf shot?” Hatton could be heard muttering to his caddie, Mike Donaghy, after hitting an approach wide right at the ninth hole in the Arnold Palmer Invitational. When Donaghy fell quiet, Hatton pressured him.

“Answer the question,” said the player.

But when the woes continued two holes later and Hatton splashed a shot into the water, it was as if everyone at Bay Hill was prepared to duck for cover as the volatile Englishman lined up an 8-foot putt for double-bogey.

“We all know what the sound is when the teapot is ready,” Paul Azinger said on NBC’s coverage.

Indeed, we do, only the situation never escalated. Fans standing near the 11th green could breathe a sigh. Hatton made the putt for a double and while weekend conditions last March proved demanding and he shot over-par both Saturday and Sunday, somehow, he prevailed.

Perhaps because it’s time to brush aside the emotional diatribes and focus more on Hatton’s immense ball-striking. The man is, after all, up to 10 worldwide wins, including six on the European Tour and he did stare down none other than Rory McIlroy to win in Abu Dhabi.

Dig deeper and you’ll find four wins, eight other top 10s, and brilliant consistency (16 top-20s) in Hatton’s last 25 tournaments. So, it’s not as if Hatton won’t deserve the spotlight March 4-7 when he returns to Bay Hill as the defending champion. He surely does.

It’s just that no matter how solid his golf is, Hatton knows people will never stop watching, just to see if he lets off a little steam or throws himself under a bus after a bad shot. After all, how many world-class pros would say something like this after a shot, as Hatton did a few years ago: “Oh, it’s a lovely flight. Just a shame it’s 25 yards left.”

Witty and silly, for sure, but Hatton back in 2016 earned the ire of fellow European Tour pro Gary Evans, who told the then 24-year-old to “grow up.” Mark Roe, commentating on Sky Sports, also chastised Hatton for his behavior.

Not that petulant behavior is anything new in professional golf. Good gracious, Woody Austin nearly knocked himself unconscious one time by slamming his own putter off his head after missing a putt and Hale Irwin was known to berate himself unmercifully.

To PGA Tour veterans like Billy Andrade, it’s always been part of the job to try and ignore the sideshow that some competitors bring to the course.

“You’d play with these guys who would look like the world was about to end, complain that they never hit a good shot, and I never understood it,” said Andrade. “If I did that, I would have been off the Tour, because I needed to be as positive as I could to play well.

“But I guess some guys need to be brutal on themselves. Maybe it’s what makes them great.”

While accepting that his running commentary and his body language might actually be overshadowing his brilliant play of late, Hatton said he feels he has a grip on it.

“I guess it has its positives and negatives. It can be an issue if you start getting a fine, which is never good,” Hatton said. “But generally, it’s just a reaction. I kind of wear my heart on my sleeve, you know how I’m feeling, so I don’t try and hide that.

“It’s only an issue if I’m affecting my playing partners from it. Obviously, I would feel really bad about that. It’s definitely not my intention, I’m just — I’m obviously kind of venting.”

Then he smiled and acknowledged that he knows you can find plenty of video clips on social media that show him as “the angry golfer.”

“I managed to, I guess, produce some funny moments on the golf course so far with some of my reactions.

“You know, I’m just being me. I’m just kind of, it’s a reaction without thinking and sometimes that can be bad, so you have to give me a little bit of slack sometimes.”

So long as he keeps playing superbly and stringing together victories, giving him “a little bit of slack” will be easy. Especially if he also delivers the chuckles.