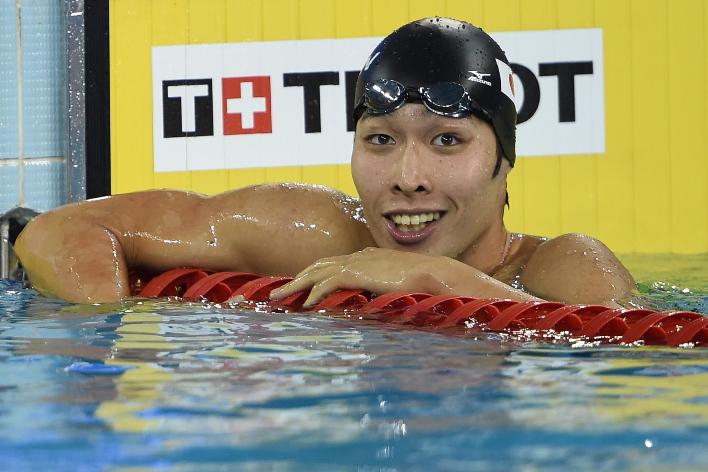 Once a “daredevil” outsider with a toothy grin, Japan swim sensation Kosuke Hagino insists there will be no excuses if he fails to beat boyhood idol Michael Phelps at the Rio Olympics.

The 21-year-old, who edged Phelps to claim bronze in the 400 metres individual medley behind gold medallist Ryan Lochte in London four years ago, told AFP he is targeting double gold in Brazil this summer.

“Back then I wasn’t even thinking,” Hagino said in a poolside interview at Japan’s National Training Centre.

“I was just this daredevil long-shot. Of course I was aiming to win a medal but I went into that race with doubts clouding my mind.

“I was lucky to finish with a medal in London, but this time there will be no luck involved,” he added.

“Everyone comes to the Olympics in top condition but those two will be the biggest challenge,” he said. “Mental toughness will be key. It’s important to hang in until the last 15 metres and then squeeze out every last ounce of power.”

Hagino, set to emerge from the shadow of countryman Kosuke Kitajima after the former Olympic champion failed to qualify for Rio, added with a laugh: “Phelps and Lochte have longer arms than me so with my little body I want to be a head in front at that point.”

Dwarfed by six-footers Phelps and Lochte on the blocks, Hagino stands at five feet, nine inches (1.75m) but suffers no inferiority complex.

“It’s a buzz to race against them,” said Hagino, star of the 2014 Asian Games where he won four gold medals, including a pulsating 200m freestyle victory over Chinese giant Sun Yang.

Hagino makes no secret of his admiration for Phelps, the most decorated Olympic athlete of all time with 22 medals from three Games, 18 of them gold.

“But when I get in the water I want to beat him,” Hagino added with no trace of sentimentality.

“Of course, even if the dream comes true and I win gold, I’ll still be a long way behind Phelps.

“But that’s why the Olympics are so special. I’ve swum against him several times but you only get the chance at the Olympics once every four years. Not just Phelps, but Ryan Lochte too.”

Brazilian Thiago Pereira, who pipped Hagino for silver behind Lochte in the 400m medley in London, will also be a threat at his home Olympics.

“Pereira has always been a great swimmer and is very dangerous,” said Hagino. “But there will be other swimmers looking to make a name for themselves too, like Japan’s Daiya Seto.”

Hagino’s upward trajectory was halted last year after he fell off a bicycle and fractured his elbow, forcing him to miss the world championships — a chastening experience, but one he insists made him stronger.

“I felt helpless,” he said. “It was so hard not to be able to compete. I was hoping to win a gold medal and give myself momentum before Rio so it was a big blow.

“But on the other hand it’s made me stronger mentally and I’m confident I’ll peak at the right time.”

Hagino’s ambitions, however, stretch well beyond Rio with Tokyo hosting the next Summer Olympics in 2020.

“To think that the Tokyo Olympics is next is a real thrill,” he said. “Obviously I will never be like Kitajima or be able to do what Phelps has done.

“Hopefully one day kids will think: ‘I want to be like Hagino’ — but I have a lot to do before that happens.” – Agence France-Presse