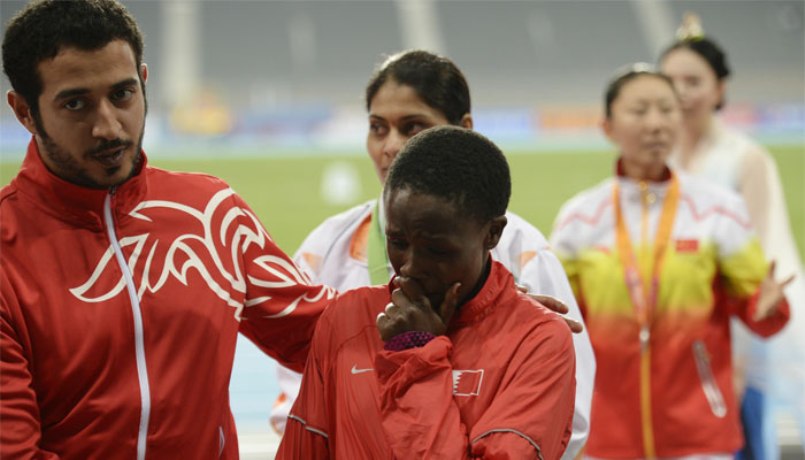 Bahrain’s Ruth Jebet regained her Asian Games steeplechase gold Sunday after a battle over her disqualification for stepping inside the track, an Olympic Council of Asia (OCA) official said.

OCA games director Haidar Farman told AFP that 17-year-old Jebet had been reinstated as winner after a review and new medal ceremony would be organised for Sunday.

The Kenya-born runner was led away in tears on Saturday when her disqualification was announced to the stadium as she was waiting to collect her gold. She easily won the race in an Asian Games record time.

The dramatic reversal came after frantic meetings between Asian Athletics Association (AAA) officials and delegates from Bahrain, China and India.

China’s Li Zhenzhu came second and Lalita Babar of India was third. They stood to gain from Jebet’s disqualification.

“The jury reviewed all of the protests by the three Olympic committees and they confirmed that there was no violation of the rules and the gold medal will be given again to Bahrain runner Ruth Jebet,” Farman told AFP.

An athletics official, speaking on condition of anonymity, said the review had decided that Jebet’s error had not hindered any other runner and did not influence the result.

The junior world champion destroyed the field at Incheon’s Asiad Main Stadium, crossing the line in nine minutes, 31.36 seconds, more than 24 seconds inside the Games record.

But as she entered the home straight on her penultimate lap she stumbled slightly and put a foot in the infield.

There was no immediate mention of fault at the end of the race and Jebet’s gold and tournament record were posted on the official Games website.

Li and Babar already had their medals when the dramatic disqualification was announced to the public.

Bahrain is furious at the way the incident was handled.

Bahrain Olympic Committee secretary-general Abdulrahman Askar said there had been an “injustice” to Jebet in the way the medal was withdrawn.

He said he had expressed Bahrain’s displeasure to the AAA technical committee and AAA president Dahlan al Hamad, saying “the decision violated all norms and traditions in sport.”

Jebet was led away to be comforted while furious Bahraini team leaders wrangled with race officials. Li, believing she was the winner, revelled in her unexpected promotion, giving the double thumbs-up and posing with the Chinese flag.

Farman said the OCA and the Asian Athletics Association would apologise to Bahrain for the slip-up.

“They should have delayed the medal ceremony. A mistake happened between the protocol and the technical delegate and they did not delay it,” he told AFP. – Agence France-Presse