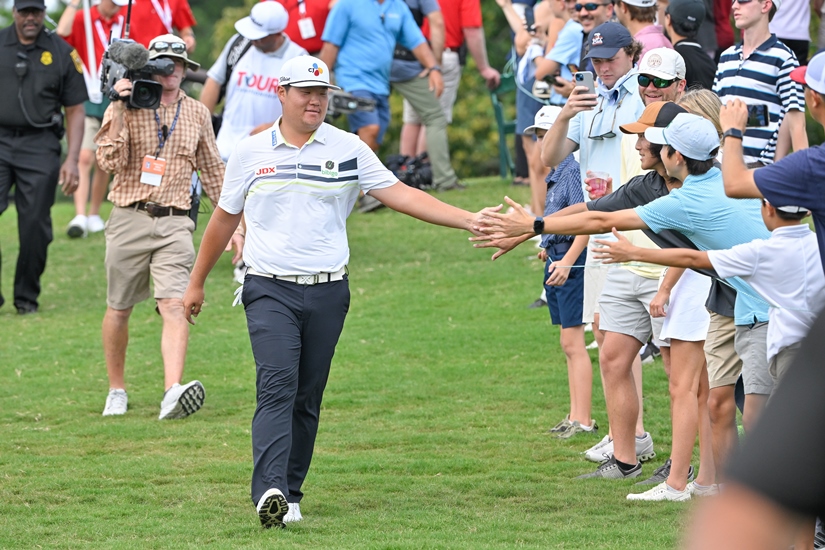 Korean star Sungjae Im agonisingly finished tied second in a thrilling conclusion to the TOUR Championship on Sunday as he took home the consolation prize by becoming the best Asian finisher in FedExCup history and pocketed US$5.75 million.

The 24-year-old Im carded a final round of 4-under 66 to end his PGA TOUR’s 2021-22 campaign on 20-under, just one stroke shy of Northern Ireland’s Rory McIlroy who brilliantly fought from six shots back at the start of the final round to lift an historic third FedExCup crown.

McIlroy, who also won the TOUR’s ultimate prize in 2016 and 2019, signed for a closing 66 as third round leader Scottie Scheffler faded with a 73 for his worst score at the Playoffs Finale.

Xander Schauffele (69) came in fourth on 18-under while Japan’s Hideki Matsuyama (70) settled for tied 11th and K.H. Lee of Korea (70) finished 27th in his debut at East Lake Golf Club.

With one victory and eight other top-10s which include three runner-up finishes, Im’s earnings this season was a handsome US$11.31 million.

“Honestly, my goal this week was to finish top 5, and to be finishing this high up is very unexpected, but it was a great finish and I’m glad how everything came out together. I’m very happy I was able to show consistency throughout, especially in the biggest tournament at the end of the FedExCup Playoffs,” said Im, who began the week six shots behind No. 1 seed Scheffler in the staggered-start format.

Faced with a seven-shot deficit entering the final 18 holes, smooth-swinging Im fought gallantly and turned in 32 with four birdies and a lone bogey, and then got to within one shot of the lead following a four-foot birdie conversion on 12.

A double bogey on 14 after fluffing his third shot from the greenside rough proved costly and despite a brave comeback with birdies on 15 and 17 from inside of 10 feet, Im had to settle for tied second after he could only make par on the par-5 18th hole in what was his fourth straight appearance at the TOUR Championship.

He lamented his error on the 14th when the chase for the FedExCup was on. “Definitely a mistake on my part. First of all, I pushed a tee shot to the right, missed the fairway, and then I was able to get it close to the green but the approach shot didn’t come out as I expected. I look back and it was a mistake, but it is what it is,” said Im, who bettered compatriot K.J. Choi’s fifth place finish in 2007.

After starting his week with a triple bogey on Thursday, it proved to be a happy ending for McIlroy as he hoisted the FedExCup for a record third time by outduelling Scheffler and Im, thanks to six birdies against two bogeys on the card. It was also the largest final round comeback in TOUR Championship history as he earned US$18 million.

The 33-year-old McIlroy, who now owns 22 PGA TOUR titles, said: “What a week, what a day. There’s one thing I want to say, I feel like Scottie deserves like half of this today. He’s had an unbelievable season (with four wins) and I feel sort of bad that I pipped him at the post. He’s a hell of a competitor and an even better guy and it was an honour and privilege to battle with him.

“I didn’t give myself much of a chance teeing off. Six behind, I thought it was going to be really tough to make it up. I got a little lucky with Scottie not playing his best golf today, and I took advantage of that with my good play. It means an awful lot. You know, to be the first to do anything in the game that you love so much, it’s an incredibly proud moment. I believe in the game of golf, I believe in this TOUR in particular, I believe in the players on this TOUR. It’s the greatest place in the world to play golf, bar none.”

Scheffler, 26, was gracious in defeat as his putter went cold and he made several errors in judgement. “Tip of the cap to Rory. He played a really good round of golf. I don’t know exactly what he started the week off, but I’m sure he was pretty close to winning the tournament individually, as well. For me, I don’t play golf for money. I play to win tournaments and I play to have fun and do my best and see where the game can take me. Today the money definitely didn’t creep into my mind. I wanted to win the season-long title. I’ve had a really great year and I wanted to finish it off with a win here, and unfortunately I wasn’t able to do that.”