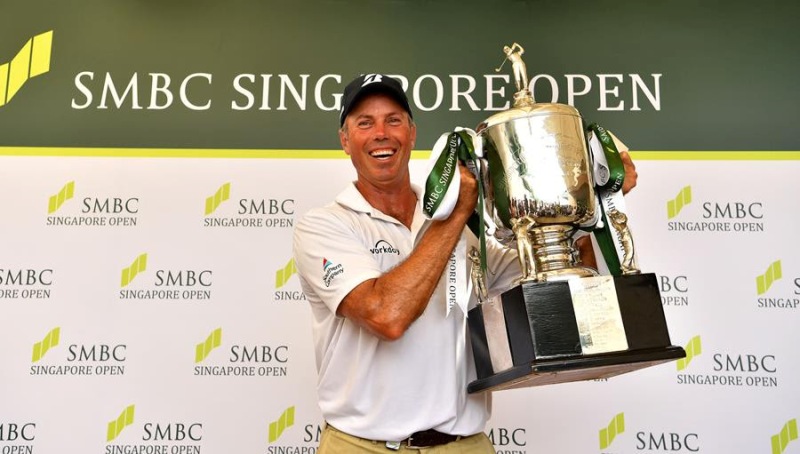 American Matt Kuchar put up a inspirational performance that demonstrated his mental fortitude when he overcame a calamitous triple-bogey on the seventh hole by charging back with three birdies in his back-nine to win the SMBC Singapore Open on Sunday.

Despite a host of Asian Tour stars including defending champion and 2019 Asian Tour Order of Merit champion Jazz Janewattananond piling the pressure on him, Kuchar showed he has the resilience to bounce back on the day that matters most at the Serapong course, Sentosa Golf Club.

Holding a three-shot lead at the start of the day, Kuchar extended his lead to four with his first birdie on four. However, the American ran into trouble on the par-five seventh when his tee shot came up against the root of a tree and he missed the ball on his first attempt to punch it out from the trees.

The nightmare continued when his approach shot flew left of the green, hit a cart path and went out of bounds. After hitting his sixth shot onto the front of the green, Kuchar eventually managed to hole a crucial putt from 10-feet for a triple-bogey eight.

But Kuchar mounted his comeback in his back-nine with birdies on 11 and 16 as his closest rivals fell by the wayside. The galleries then roared in unison as he went on to sink a birdie putt from almost 20 feet to win the iconic Singapore event with a final round one-under-par 70.

Former world number one Justin Rose of England finished in second place after posting a four-day total of 15-under-par 269 while Jazz took outright third place with a closing 71 at the US$1 million event which is sanctioned by the Asian Tour and Japan Golf Tour Organisation (JGTO).

Korean teenager Joohyung Kim signed for a 71 to take fourth place along with one of the four tickets to The Open at Royal St. George’s in July.

Matt Kuchar (Usa) Final round 70 (-1) Total 266 (-18)
This is fantastic to travel around the world and come to a great city like Singapore, and to play a great golf course that you have here, to play against a great field and test my game against some great, great players that we don’t often see in the United States. There are certainly a lot of great players here on this Tour, so it feels fantastic to come out on top. I’m awfully proud of being able to bounce back from adversity and being able to not let hard things get the best of me. And seven was a disastrous hole to make triple bogey there. I felt like I was cruising along and had a four shot lead that point and it was awfully comfortable. I played a tee-shot that I thought was a conservative shot, just a little up the left side, and it ended up finding its way between a few roots. I swung and missed as the ball was wedged among the roots, then had to step up and actually try to swing and hit that ball on the next shot. I got it out. Next one hits the cart path and goes into the leaves and I have to take a penalty drop. Finally put it on the green and lining up an 80-footer up to 10 feet for a triple knowing that Jazz is about to make birdie, and if he makes birdie I need to make triple just to tie with him. So, I think that 10-footer was a big, big putt to make. A 10-footer is an easy one to miss and a great putt to make. It was a bit of a wake-up call, but I was playing good golf then all sudden you’re all square. I was pleased, really pleased to be able to bounce back. There is another par-five the 18th where I as playing conservative with the water on the left, my ball went to the right and found the bunker which I thought was a fine place to be. But I could only play a standard greenside blast out of the bunker and then be faced with a shot of 230-yards. I knew I only needed a bogey to win and of course I hit a fantastic shot to about 20-feet.

Justin Rose (Eng) Final round 67 (-4) Total 269 (-15)
I played some good golf and made some good putts. I was just disappointed with the (way I played around the) turn, really. I did not realise Kuchar had made a mistake somewhere on the front nine and I bogeyed eight and nine and missed a short birdie putt on 10. That is where I lost the tournament. When I walked onto the ninth I could see that Kuchar had given a couple back and I was a little frustrated but I was still only four back on the 10th fairway, which was two better than the start of the day, so I tried to reset and I played great golf coming in and (mounted) a chase. I got close, you know. Kuchar made a good birdie at 16 and every credit to him. (If i had known earlier he had triple bogeyed) my intensity might have been different, yeah. You never know. I felt my best and played my best when I had a chance to win. For me, it is a good first week of the year. Four rounds in the 60s, consistent golf, got into contention, felt some of those nerves, which is great. A lot to take from the week.
This is a nice start and I feel I can build some momentum from it. Some second places hurt, some second places you feel good and this is more of a feeling good second place finish.

Jazz Janewattananond (Tha) Final round 71 (Even) Total 270 (-14)
Matt was amazing you know, after that eight he still recovered and won with class. I mean, it’s just amazing to see what top players in the world can do, and really good to experience it up close. I got a lot to learn you know. There are many things to improve and after playing alongside Matt Kuchar I can see that I need to do a lot of things. It’s really good opportunity to play with these guys and see what it takes to step up to the next level.

Joohyung Kim (Kor) Final round 71 (Even) Total 271 (-13)
Obviously today wasn’t the round that I would have hoped for. Still, I played really good in these conditions. I wish I could have four rounds under par, but even in the final round in the wind wasn’t too bad with these pins.
I’m definitely really happy, and really excited that I took the ticket to The Open. It was my goal to try to qualify for a major, and for it to happen the second tournament of the year, and to be The Open, is a dream come true.

Richard T. Lee (Can) – Final Round 72 (+1), Total 272 (-12)
I may not have won the tournament but I got myself a ticket to The Open! I kind of struggled today with my shots and my putts but how I turned things around on the back nine pretty good and I am very glad about the way I finished. The Open is going to be the second Major that I will play in so I am definitely going to work really hard and get ready for it in July. I love playing links courses so I will try to find my best. I worked really hard over the off season which was only like two weeks and a half. I am pretty impressed with how I played although I still need to work on a few more things. Putting especially. But overall, I am glad about how I played today.

Poom Saksansin (Tha) – Final Round 65 (-6), Total 273 (-11)
I am happy I gave myself a chance to qualify for The Open. It’s going to be my first time playing in a Major tournament. I think it would be nice! I came into this week with no confidence because I have been trying to fix my swing in last three months. But this week, I played really well and I think I have regained the confidence with my swing. This is a long course for me. It doesn’t really suit my game. But the greens are nice here and I putted well. I am looking forward to the experience of playing in a Major already. It’s going to be the biggest stage that I have ever played so I am very excited.