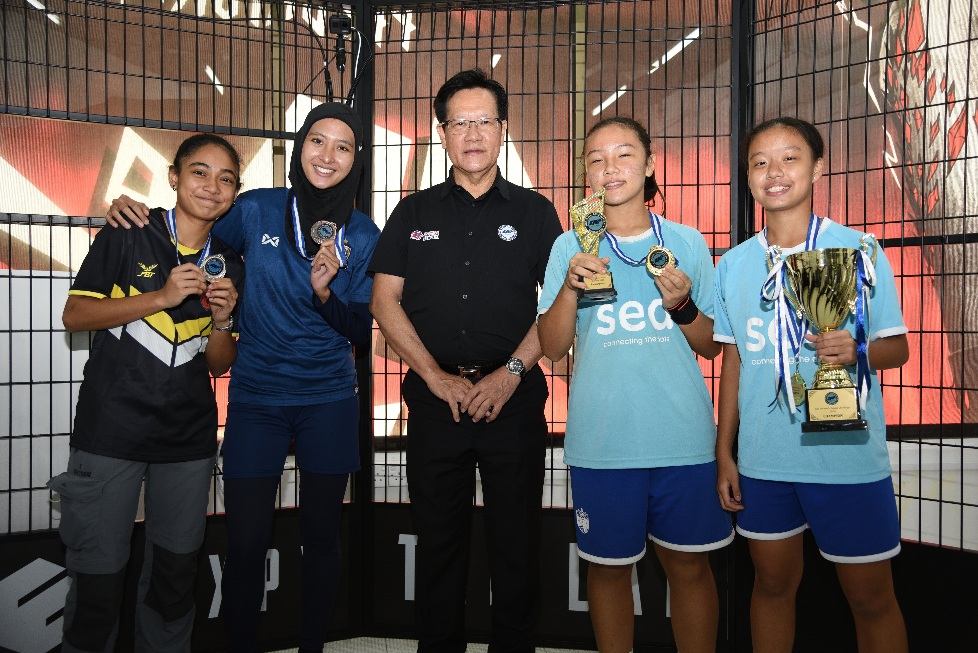 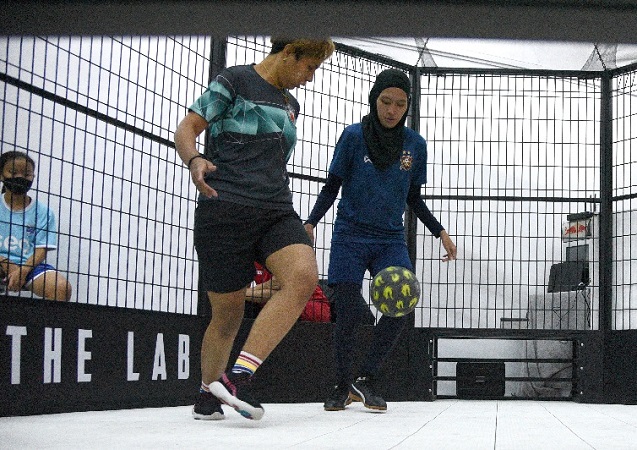 Each participating player was randomly drawn into five groups of four, with a club representative in each group.

They then competed in a triple round-robin format where a win by ‘Panna’ (i.e. successfully putting the ball between your opponent’s legs) is worth five points, a win by number of goals scored will earn three points, a draw will garner a point and a loss, zero points.

All matches were live streamed on the Facebook pages of FA of Singapore (FAS), Soccer Girl Goals as well as 1 Play Sports.

From the start, Lion City Sailors established themselves as the clear runaway leader recording 38 points to Bussorah Youths’ 26 points with seven Pannas from the get-go.

By the third day, the leaders pulled away and extended their lead to an almost unassailable 31 points.

With the first two positions virtually secured between the two teams, it was a tight battle between the remaining three teams for the second runners-up spot.

Simei United, Tiong Bahru and Phoenix Pride exchanged positions right up till the last day of the competition where Tiong Bahru scored three Pannas and overtook the other two teams to claim third place.

Tiong Bahru player Tan Xin Yi, who also recorded the tournament’s fastest Panna at just 1.5 seconds, said, “We have all been missing football action since the start of circuit breaker and this tournament definitely came as a welcome respite for us as we could play football again but in a safe manner. I think it was a great initiative on the part of FAS and Soccer Girl Goals, and also Expy The Lab for hosting it. I did not expect to score a Panna in such a short time but it is all about watching the movement of the ball before executing a move. We are definitely looking forward to participating in more of such tournaments in the future.”

On her team’s clear-cut win in the competition, 13-year-old Chloe Koh said, “It was definitely unexpected and I am just happy to share this win with my teammates. This Panna Challenge was an eye-opening experience for me because it is not something that we would normally find ourselves doing competitively and it is a tremendous test of our technical ability with the ball. Hopefully, there will be more of such competitions in the future even when normal football resumes.”

A special award was also given out to 13-year-old Madelin Sophie Lock Lu Ruiyi from the Lion City Sailors as the official “Panna Queen” of the tournament.

The panel of judges picked their winner based on footwork, the ability to maintain style of play whilst adapting to each game, as well as skills and tricks.

Madelin recorded five Pannas in total, and the judges were impressed by her ability to deal Pannas with trickery and skills instead of blank attempts to kick the ball through her opponents’ legs.

After the win, Madelin said, “I was really surprised to be awarded the title of Panna Queen as I usually only watch Panna videos on YouTube at home. Because I injured my hand recently, I could not go for training sessions, so I focused on training my footwork at home with just cones.

“Panna is easy to practise at home as it does not require many people – it is very different from 11-a-side football where you need to work on your passing and movement, which requires footballing intelligence too. Panna provides a different dimension to the sport, as you just need to know your moves, find a gap and then execute it. It is also a great substitute for 11-a-side football especially now that we have not been granted official permission to play it. Overall, I’m just really happy to have taken part in the tournament and excited to win the Panna Queen.”

Her teammate Miray Hokotate Altun came in a close second with seven Pannas.

Speaking at the prize presentation ceremony, FAS President Lim Kia Tong expressed his delight at the success of the tournament and emphasised that the association will do what they can to support grassroots and women’s football to the best of their abilities.

He said: “Although it is a pity that we were unable to resume football for our women’s leagues due to the Covid situation, we will strive to continue producing creative activities and tournaments that cater to them, whilst adhering to all safety measures. The conclusion of the FAS Women’s Panna Challenge 2020 is a befitting way to cap off the year on a high as it perfectly embodies how sport and especially football, does not stop even in the face of adversities.

“This tournament has allowed us to witness a brilliant showcase of skills and self-expression from the players, which also contributed to an entertaining display of the sport we all love. I would like to express my sincere gratitude to the participating club players who have contributed to the success of the tournament by giving their time and effort. Special thanks to our media partner Soccer Girl Girls as well as our venue partner Expy the Lab for facilitating and making the tournament a resounding success.”