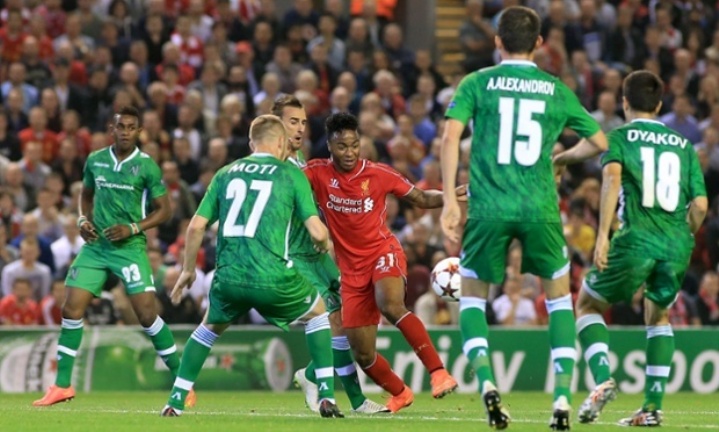 Liverpool’s Champions League campaign is on the line as they travel to Ludogorets on Wednesday where victory is crucial for both teams.

In London, Arsenal can also shake off their domestic troubles and guarantee their place in the knock-out phase when they take on already-qualified Borussia Dortmund at the Emirates Stadium.

Last season’s runners-up Atletico Madrid can return to the knock-out phase with victory over Greek champions Olympiakos in the Spanish capital.

The Liga champions are coming off a 3-1 victory over Malaga on Saturday and currently lie third in the table, just four points behind leaders Real Madrid.

Olympiakos, whose best result in the competition was reaching the 1999 quarter-finals, are three points behind their hosts and ahead of Juventus on goal difference with six points and two games to play.

Swedish outsiders Malmo, who lost the 1979 European Cup final 1-0 to Nottingham Forest, are still in control of their own destiny as they get set to host Italian champions Juventus in a crucial tie in Group A.

Malmo are last in the pool on three points, and lost the away fixture in their opening match in Turin 2-0 before defeating Olympiakos for their only win so far.

Serie A leaders Juventus are level with Olympiakos on six points but trail on goal difference and face a home match against leaders Atletico Madrid on the final matchday.

Real Madrid have already guaranteed qualification after four straight wins and will likely field a weakened line-up for the journey to second-placed Basel who are on six points, three ahead of Liverpool and Bulgarian challengers Ludogorets Razgrad.

The Swiss, who reached the last 16 in 2012, lost 5-1 against Carlo Ancelotti’s defending champions in the opening round of matches but know at least a draw will maintain second spot ahead of their final day trip to Anfield and a showdown against Liverpool.

Struggling five-time former champions Liverpool face a test of their integrity as they travel to Bulgaria and a crunch Group B clash against a Ludogorets side they only beat in the 93rd minute at home on day one thanks to a Steven Gerrard penalty.

Manager Brendan Rodgers is feeling the heat after his expensively-assembled squad slumped to 12th in the Premier League following a 3-1 defeat at Crystal Palace on Sunday.

Their opponents are level on three points and a draw could mean elimination for both clubs if Basel defeat qualified Real Madrid the same night in Switzerland.

All four teams can still qualify from Group C as the 2008 UEFA Cup winners host a Benfica side who are level on four points at the Petrovsky Stadium.

Zenit, who have enjoyed a surge of form since coach Andre Villas Boas took over, are eight points clear in the Russian top flight having lost just once in 14 matches.

Both teams will be chasing victory in the knowledge that a draw, combined with a Monaco win at leaders Bayer Leverkusen, would put both clubs in jeopardy.

Leverkusen are in pole position in the pool on nine points but defeat against Monaco at their BayArena and a reverse in the final match away to Benfica could still them them eliminated.

Monaco, who lost the 2004 final against Porto, have flattered to deceive this season and have picked up just two points in their last three European encounters while their league form has also been mediocre.

Roger Schmidt and his side received a confidence boost in the Bundesliga on Saturday with a 3-1 win at Hanover which lifted them to fourth in the table.

Arsene Wenger must rally his Arsenal players, after the 2-1 Premier League defeat against Manchester United on Saturday, against a Dortmund side who are already qualified after four straight wins.

The Gunners threw away a 3-0 lead in their last outing at home to Belgian side Anderlecht where a 3-3 draw denied them their place in the last 16.

Dortmund suffered the loss of key midfielder Marco Reus during their 2-2 draw at Paderborn on Saturday and the German international is out for the year while Arsenal’s first-choice goalkeeper Wojciech Szczesny is a doubt after coming off injured in the defeat against United at the Emirates Stadium.

Belgian champions Anderlecht must defeat the Turkish guests in Brussels, and hope Arsenal fail to win at home to Dortmund, to keep alive their slender chances of qualifying for the next round.

Galatasaray, who reached the quarter-finals last season, have just one point to show from four matches and will be targeting third spot in the pool and a consolation place in the Europa League.

The Istanbul club crashed to a 3-0 home defeat against Trabzonspor at the weekend and are third in the Turkish top flight with city rivals Besiktas top.